Surveillance of Antibiotic Use and Resistance in Intensive Care Units (SARI)

Background: The project entitled Surveillance of Antibiotic Use and Resistance in Intensive Care Units (SARI) was initiated in Germany in 2000. In this article, we describe developments in antibiotic use and resistance rates in the participating intensive care units over the years 2001–2015.

Results: In the years 2001–2015, data on 2 920 068 patient days were collected in 77 intensive care units. The average overall antibiotic use rose by 19% over this period, with a marked increase in the density of carbapenem use (from 76 to 250 DDD per 1000 patient days, +230%) and piperacillin-tazobactam use (from 42 to 146 DDD per 1000 patient days, +247%). The proportion of Escherichia coli and Klebsiella pneumoniae isolates that were resistant to third-generation cephalosporins increased markedly initially, then remained stable over the remainder of the observation period. The proportion of methicillin-resistant Staphylococcus aureus was stable over the entire period. The rates of vancomycin resistance among Enterococcus faecium isolates and imipenem resistance among gram-negative pathogens increased from 2.3% to 13.3% and from 0.1% to 0.3%, respectively.

Conclusion: The resistance density of gram-negative multiresistant pathogens in the participating intensive care units increased markedly. The rise in imipenem-resistant pathogens arouses particular concern. The increased use of broad-spectrum/reserve antibiotics may well have contributed to this development. Efforts to use antibiotics rationally, e.g., with the support of multidisciplinary “antibiotic stewardship” teams, are therefore vitally important. As participation in SARI is voluntary, these surveillance data cannot be considered representative of Germany as a whole.

Worldwide, the consumption of antibiotics has increased substantially in the past decades (1). Increased use of antibiotics promotes—in addition to other factors (2)—the selection and spread of antibiotic-resistant or multiresistant pathogens, with the result that the treatment of infections caused by these pathogens becomes more difficult (3). The problem is concentrated in intensive care units (ICUs) (4), where often multimorbid patients generally present with a higher risk for nosocomial infections (5) and infections with multiresistant pathogens can lead to additional complications, prolonged hospital stays, and higher healthcare costs (6–9).

In February 2000 the project for the surveillance of antibiotic use and resistance in intensive care units (SARI) in Germany was initiated for the purpose of benchmarking (10, 11). After a one-year pilot phase, SARI has continuously captured antibiotic use densities and resistance data for selected pathogens on ICUs in Germany.

This article aims to describe the development of antibiotic resistance and changes in resistance rates in the past 15 years in this cohort of ICUs in Germany.

Participation in SARI is voluntary. The methods are explained in greater detail in the eMethods section and have already been described elsewhere (10–12) (http://sari.eu-burden.info/down/protokoll.pdf). In sum, participating ICUs report on a monthly basis the number of patient days, use (in g) of all orally or parenterally administered antibiotics, and resistance rates of the following pathogens:

Resistance testing can be performed according to German industry standard (DIN) 58940, the CLSI (Clinical & Laboratory Standards Institute), or EUCAST (European Committee on Antimicrobial Susceptibility Testing). Copy strains—that is, isolates detected within 30 days from a patient with an identical antibiogram—were not included in the analysis. The frequency of taking specimens from patients is the prerogative of the clinician in the respective ICU; tests performed exclusively for the purpose of screening were not considered. We did not collect data on the total number specimens sampled, the location of the specimen sampling, nor on whether an infection or colonization was present or whether the pathogen was acquired in an outpatient or inpatient setting.

Pooled mean values, medians, and interquartile ranges (25th and 75th percentile) of antibiotic use density, resistance rates, and antibiotic resistance density were calculated from the reported data for the period 2001–2015. Since not all ICUs participated in SARI for the entire duration of the study, a sensitivity analysis was used to calculate the antibiotic use density, resistance rates, and resistance density for only those ICUs that had reported data continuously from 2001 to 2015 (core cohort). At the time points 2001 and 2015, the results of the core cohort were compared with those of the total cohort, in order to identify possible differences in trends in antibiotic use and resistance rates. We used the Wilcoxon test to calculate for both cohorts on the basis of the inpatient ward whether the use of antibiotics and the resistance rates of the analyzed pathogens changed between 2001 and 2015. We used SAS 9.4 (SAS Institute, Cary, NC, USA) to evaluate the data.

Among the classes of antibiotics, the use of carbapenems increased most, from 76 DDD/1000 patient days in 2001 to 250 DDD/1000 patient days in 2015 +230%) (Table 1 and eTable 2). This increase is mainly accounted for by the use of meropenem (+638%). Increases were also noted in the use of penicillins with β-lactamase inhibitors (+28%), glycopeptides (+48%), macrolides (+36%), and other antibiotics (+928%). The notable increase in the use of other antibiotics is mainly due to linezolid, tigecycline, and daptomycin—substances that were not, or had only just become, available in 2001. In the group of penicillins with β-lactamase inhibitors, the greatest increase was seen for piperacillin/tazobactam (+247%). Over the observation period, the use of first and second generation cephalosporins decreased (−29%), as did that of aminoglycosides (−75%) and imidazoles (−40%) (Figure 1, Table 1, and eTable 2).

Since 2001 the number of isolates increased by 22%, with the greatest increase observed in E. coli (+87%), Enterococcus species (+65%), and K. pneumoniae (+63%), whereas the greatest decrease was observed among A. baumannii isolates (–72%). The decrease in A. baumannii isolates was constant over the entire study period, but this effect may have been affected by additional species differentiation that was introduced by some laboratories from 2012 onwards (see eMethods section).

According to SARI, the proportion of methicillin-resistant S. aureus (MRSA) has stabilized in recent years (eTable 4). However, in 2015, almost 23% of all S. aureus strains were still resistant to oxacillin (Table 2). Of note is the increase in vancomycin-resistant E. faecium (VRE) isolates. In 2001, only individual VRE-isolates were confirmed, whereas in 2015 more than 75% of all ICUs participating in SARI were affected; the resistance rate was 13.3%, which translates into a resistance density of 1.1 VRE/1000 patient days (Table 2 and eTable 4, Figure 2). A new observation among this pathogen was an increase in linezolid-resistant isolates, to 1.6% (n = 28/1776 isolates) in 2015 (eTable 4).

Between 2001 and 2011, the proportion of E. coli and K. pneumoniae isolates with resistance to third-generation cephalosporins increased notably (eFigure). Since then the resistance rate has stabilized, and in 2015 it was 16.3% and 15.7%, respectively (Table 2). Resistance rates to ciprofloxacin in these two pathogens increased over the entire study period from 8.3% to 26% (E. coli) and from 5.1% to 15.9% (K. pneumoniae) (eTable 4). In recent years, the proportion of imipenem-resistant K. pneumoniae isolates has also risen. At the start of the study period, such isolates were seen only in individual cases. In 2015, by contrast, they were confirmed in more than 25% of all participating ICUs. The resistance rate was 1.6% (eFigure, Table 2).

The increase in A. baumannii isolates with resistance to imipenem was particularly pronounced. The resistance rate has more than doubled over recent years and was 43% in 2015 (eFigure, Table 2).

Since the start of the SARI project more than 15 years ago, the use of antibiotics in intensive care units participating in SARI has risen by 19%. This rise is mainly due to the increased use since 2009 of piperacillin/tazobactam, carbapenems, and glycopeptides. Studies from France, Norway, and Switzerland similarly observed an increase in antibiotic use in intensive care units, especially of reserve antibiotics or broad-spectrum antibiotics (13–15). Because of different study periods and possible differences in the study populations, a direct comparison of the results is feasible only to a limited degree.

Regarding the development of resistance in gram-positive pathogens, the increase of VRE in SARI ICUs is notable, and the incipient confirmations of linezolid-resistant E. faecium isolates further restrict therapeutic options (16). The development and selection of VRE can be explained primarily by the use of different antibiotics and the resultant selection pressure on the Enterococcus species that naturally occurs in the gastrointestinal tract (17–19). In addition to vancomycin (19), ceftriaxone (20) and antibiotics with anaerobic activity—for example, metronidazole or piperacillin/tazobactam—seem to have an important role in the selection process (18, 21, 22). According to SARI, the rise in VRE started in 2007. Simultaneously, the use of glycopeptide antibiotics and piperacillin/tazobactam increased. By contrast, we did not identify an increase in the use of third-generation cephalosporins and imidazole derivatives in the study period. In terms of the spread of VRE in hospitals, however, other factors also have an important role. Because of their high environmental tenacity, VRE can survive for long periods on inanimate surfaces, which facilitates transmission between patients, especially if hygiene measures are not strictly adhered to (19, 23).

In addition to VRE, according to the European Centre for Disease Prevention and Control (ECDC), another cause for concern is the increase of multiresistant gram-negative pathogens in invasive infections (24). Europe-wide between 2011 and 2014, the mean proportion of VRE increased from 6.2% to 7.9%, whereas the proportion of E. coli and K. pneumoniae isolates with resistance to third-generation cephalosporins increased from 9.6% to 12% and from 23.6% to 28%, respectively. Furthermore, the proportion of imipenem-resistant K. pneumoniae isolates increased from 6% to 7.3% (24). Systematic reviews and meta-analyses indicate that the case fatality rate in infections with VRE (25), E. coli and K. pneumoniae with resistance to third-generation cephalosporins (26), and K. pneumoniae with resistance to imipenem (27) is significantly raised compared with infections with susceptible pathogens.

In SARI ICUs, resistant gram-negative pathogens have gained in importance. Except for P. aeruginosa, they were identified in individual cases only at the start of the study period. In the meantime, resistant gram-negative pathogens have become responsible for half of the resistance burden in SARI ICUs. The proportion of E. coli and K. pneumoniae isolates with resistance to third-generation cephalosporins in SARI ICUs has not risen further in the past 3–4 years after a notable increase between 2001 and 2011, but the resistance rate in both pathogens in 2015 was still high, above 15%. One explanation of this stagnation may be the fact that because of increasing resistance against third-generation cephalosporins, carbapenems had to be used increasingly in empiric and definitive antibiotic therapy (12). This facilitated the selection of imipenem-resistant K. pneumoniae and A. baumannii isolates that are difficult to treat and, in the worst case scenario, are associated with hospital outbreaks (28–31). On SARI ICUs, imipenem-resistant A. baumannii isolates have been identified regularly since 2005, whereas imipenem-resistant E. coli isolates have hardly been identified at all, and K. pneumoniae isolates only since 2014. A look back, however, shows that the development of resistance of the same pathogens against third-generation cephalosporins started in a similar way 15 years ago, and in the meantime this has become an ongoing problem in Germany’s ICUs. The fact that the proportion of resistant Enterobactericeae seems to increase even in the general population (32) makes it clear that it is not enough to study resistance patterns only in hospitals.

Because of the ecological study design, the results should be interpreted with caution, and the following limitations should be borne in mind:

In spite of these limitations, the present data can help to better assess trends in antibiotic consumption and resistance patterns in Germany’s ICUs and to develop measures to combat the development of resistance.

We thank all participants in the SARI project for their support.

The SARI project received funding from the German Federal Ministry of Education and Research (BMBF) until the end of 2006.

eTable 5
Enlarge All figures
Surveillance of Antibiotic Use and Resistance in Intensive... 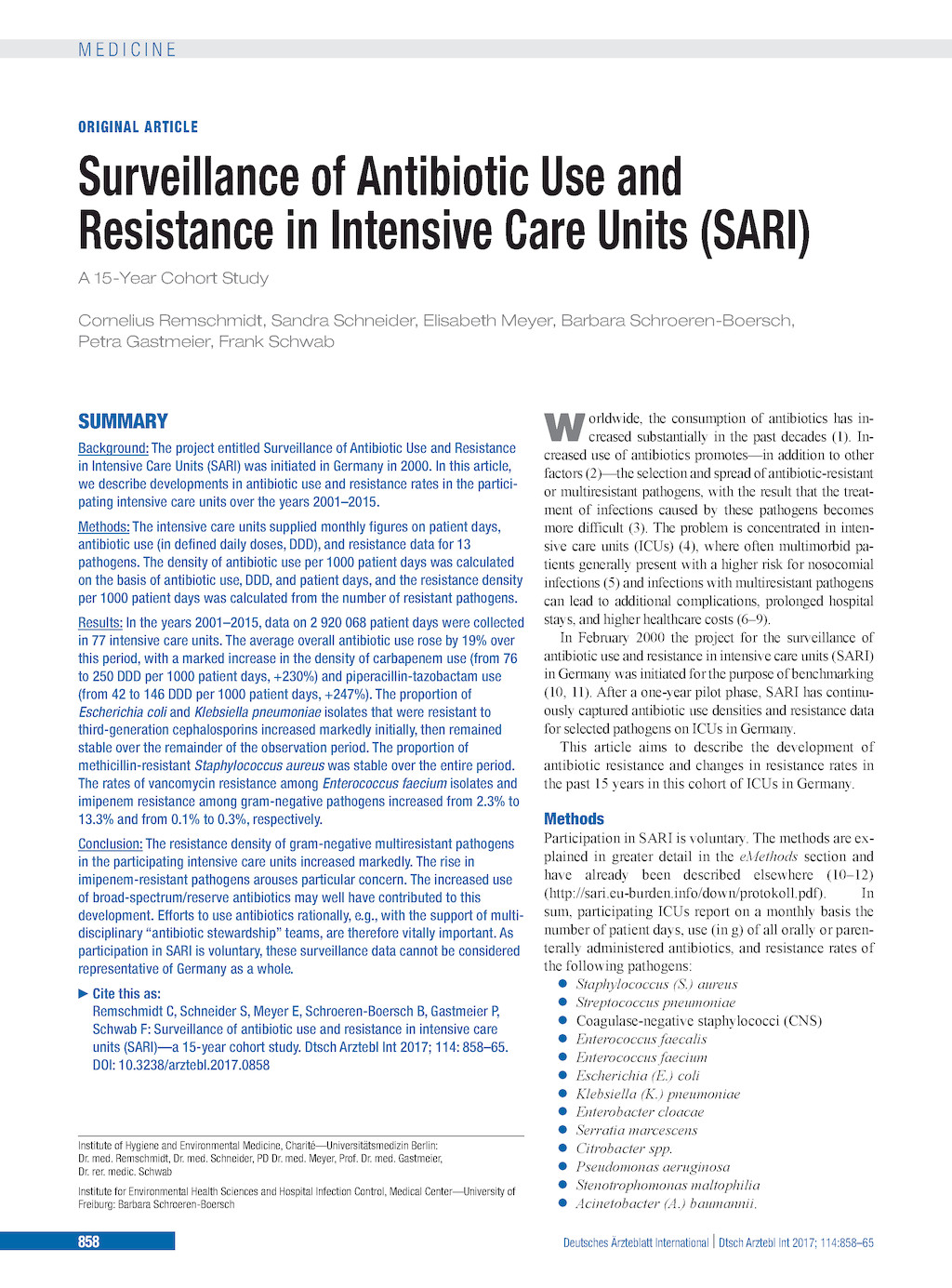