The Risks Associated With Obesity in Pregnancy

Background: Approximately one-third of all women of childbearing age are overweight or obese. For these women, pregnancy is associated with increased risks for both mother and child.

Methods: This review is based on pertinent publications retrieved by a selective search of PubMed, with special attention to current population-based cohort studies, systematic reviews, meta-analyses, and controlled trials.

Results: Obesity in pregnancy is associated with unfavorable clinical outcomes for both mother and child. Many of the risks have been found to depend linearly on the body-mass index (BMI). The probability of conception declines linearly, starting from a BMI of 29 kg/m2, by 4% for each additional 1 kg/m2 of BMI (hazard ratio 0.96, 95% confidence interval: [0.91; 0.99]). A 10% increase of pregravid BMI increases the relative risk of gestational diabetes and that of preeclampsia by approximately 10% each. A 5 kg/m2 increase of BMI elevates the relative risk of intrauterine death to 1.24 [1.18; 1.30]. An estimated 11% of all neonatal deaths can be attributed to the consequences of maternal overweight and obesity. Nonetheless, in most randomized controlled trials, nutritional and lifestyle interventions did not bring about any clinically relevant reduction in the incidence of gestational diabetes and fetal macrosomia.

Conclusion: The risks associated with obesity in pregnancy cannot necessarily be influenced by intervention. Preventive measures aimed at normalizing body weight before a woman becomes pregnant are, therefore, all the more important.

A selective search primarily of the English literature was conducted in the PubMed database, using the following search terms: “obesity”, “pregnancy”, “female fertility”, “miscarriage”, “still birth”, “mortality”, “morbidity”, “weight gain”. Altogether 4002 hits were obtained for the past ten years up to and including December 2017.

Obesity and the desire to have children

Obesity-related hyperinsulinemia und subsequent hyperandrogenemia increase the risk for anovulatory cycles (2). The time until pregnancy occurs is longer in obese women compared to women of normal weight (3, e1–e3). The chance of conception within one year is already reduced starting at a BMI of 26 kg/m2 (89.4% with a BMI of 20–25kg/m2 versus 82.7% with a BMI >25 kg/m2; n = 10 903) (4). Women with comorbidity were excluded from the analysis. The effect remained significant even after adjustment for possible confounding factors, such as age, parity as well as regularity and duration of the menstrual cycle (odds ratio [OR]: 0.77 [0.70; 0.84]). Thus, reduced fertility associated with increasing BMI cannot only be attributed to menstrual irregularities (4, 5).

A study on women with regular ovulations desiring to have children (after exclusion of tubal and androgenic abnormalities, n = 3029) found that within one year 17% of subjects had a spontaneous pregnancy not ending in miscarriage (5). The likelihood of conception decreased in a linear fashion by 4% per 1 kg/m2 weight gain, starting from a BMI of 29 kg/m2; this finding remained significant even after adjusting for potential confounders (age, duration of desiring a child, pregnancy, smoking, sperm motility) (hazard ratio [HR]: 0.96 [0.91; 0.99]) (5).

Maternal risks over the course of pregnancy

The risk of pregnancy-associated disorders increases with increasing severity of obesity (Table 1) (7–12). A 10% difference in pre-pregnancy BMI is associated with an at least 10% change in relative risk of preeclampsia and gestational diabetes, respectively (10). The obesity-associated increase in risk of not primarily pregnancy-related diseases is usually less pronounced (7–9, 12). Over the long term (≥ 10 years), a pre-pregnancy BMI >25 kg/m2 is associated with an increased risk of manifestation of diabetes mellitus and cardiac disease. Gestational weight gain of more than 15 kg increases the risk of becoming obese later in life (13).

The prevalence of fetal malformations was significantly correlated with the severity of obesity (Table 2) and the risk increase was independent of gestational diabetes (16). Apart from that, a meta-analysis comprising 18 studies reported the following obesity-associated increases in risk for specific malformations:

However, it has to be taken into account that ultrasound sensitivity was reduced due to unfavorable physical scanning conditions (e6). The decrease in fetal chromosomal fraction associated with obesity results in reduced detection rates for chromosomal aberrations, regardless of gestational age, in non-invasive prenatal testing (NIPT) too (e7).

Similarly, maternal obesity is associated with an elevated postnatal mortality risk (first year of life) which increases with increasing BMI (Table 3) (19). The effect was more pronounced in term versus preterm neonates and had an effect on both early (≤ 28 days after delivery) and late mortality (>28 days after delivery). Even after women with concomitant hypertension and diabetes had been excluded, the association was still present: When comparing normal-weight versus BMI ≥40 kg/m2 women, the adjusted OR was 2.24 [95% CI: 1.65; 3.03]. The authors calculated that 11% of deaths were associated with complications caused by overweight and obesity. Thus, with an annual infant mortality of about 2400 cases in Germany, 264 deaths could have been avoided. A sibling study confirmed the significance of maternal obesity as a risk factor for IUFD and postnatal mortality, regardless of genetic predisposition or familial factors (e9). Likewise, in initially normal-weight women a weight gain ≥2 kg/m2 was associated with an increased risk of IUFD and postnatal mortality (20). Weight loss from an initial BMI of ≥ 25 kg/m2 reduced the risk of neonatal mortality during the first 28 days after birth (20). Other studies confirmed the association between obesity and risk of IUFD and postnatal mortality (7, e10–e12).

The preterm birth rate—both spontaneous and medically indicated due to pregnancy-associated conditions—is increased in obesity and contributes to the unfavorable neonatal outcome (21, 22, e15). The risk of medically indicated early preterm birth is primarily increased due to hypertensive and diabetic pregnancy complications (22). This risk is further increased in patients with gestational weight gain which is above the Institute of Medicine’s recommendations of 5 to 9 kg from a BMI ≥30 kg/m2 (meta-analysis with n = 3892, adjusted OR: 1.54 [1.09; 2.16]) (23, 24). The situation is similar for weight gain between two pregnancies. In women with first pregnancy BMI <25, the risk of spontaneous preterm birth (32 to 36 weeks’ gestation) increases by adjusted 18% when the BMI increases by ≥4 kg/m2 compared to baseline level [5; 33%], p = 0.007, n = 305 953) (e16).

Maternal obesity increases the risk of fetal macrosomia, as demonstrated by the results of a meta-analysis including 21 studies: 13.4% with obesity (n = 31 756) versus 7.8% with normal weight (n = 57 392, pooled OR: 2.11 [1.97; 2.27]) (25). Here again, maternal gestational weight gain was an additional independent risk factor (e17, e18). Neonates of obese mothers had a higher percentage of adipose tissue (e19, e20). A study evaluating 112 309 deliveries of women without chronic disease prior to pregnancy showed that the percentage of fetal macrosomia (“large for gestational age“, LGA) rose with increasing maternal BMI, amounting to 17% (538/3105) among ≥40 kg/m2 women (2.76% of the cohort) compared to 8% (5272/66 463) among normal-weight mothers (RR: 2.32 [2.14; 2.52], p <0.001) (7). This association remained even after exclusion of all cases with gestational hypertensive disease and gestational diabetes (14.7% [n = 327] in pregnant women with class III obesity versus 7.9% [n = 4863] with normal weight, RR: 2.04 [1.83; 2.26], p <0.001). Further studies confirmed that obesity is a risk factor for fetal macrosomia, independent of a diabetic metabolic state (26, e21). The pathogenesis of fetal macrosomia is complex. On the one hand, macrosomia appears to be the consequence of increased maternal blood glucose levels, resulting from obesity-related insulin resistance which can already be detected below the diagnostic threshold for gestational diabetes (26, 27, e22). This is supported by the close correlation between maternal fasting glucose levels and fetal weight (23, 28, e17). On the other hand, however, the increase in percentage of adipose tissue in the neonate can only be explained to a limited extent by the increased availability of metabolic substrates (28). After including placental mass as a covariate in multiple regression analysis, BMI-related metabolic changes correlating with neonatal body fat mass were no longer significant (e23). This highlights the important role of the placenta as a nutritive sensor, actively influencing the metabolic regulation of maternofetal interactions (e24, e25).

Fetal macrosomia, maternal obesity and excessive weight gain during pregnancy are associated with later obesity in childhood and adolescence (e26, e27). As early as at age 6 years, children of women who were obese before they became pregnant had more often a cardiometabolic risk profile compared to children of normal-weight mothers: 22.4% (54/404) versus 8.3% (144/2789), p <0.01; OR: 3.0 [2.09; 4.34]) (e28). After adjusting for the children’s BMIs, these differences were no longer significant; thus, the changes (parameters assessed: android fat distribution pattern, blood pressure, blood lipid levels, serum insulin and C-peptide levels) are significantly influenced by the increased risk of weight gain these children are exposed to. Similar results were found for maternal weight gain during early pregnancy (e29). These associations can still be demonstated at age 17 years (e29).

The risks culminate at the time of delivery and apply to mother and infant (Table 4). The likelihood of vaginal delivery decreases with increasing obesity (8, 11, e30). Even though cesarean sections are more commonly performed in obese mothers (7–9), attempts of vaginal delivery are successful in 73% of primiparas and 94% of multiparas (e31). Conditions underlying the increased cesarean section rate include preeclampsia, fetal distress, cephalopelvic disproportion, and failure to progress in labor (11, e32). However, due to wound infection and wound healing abnormalities, surgery-associated morbidity is also increased in obese women (7, 8, 11). Epidural analgesia is often unsuccessful (e33). Early administration of epidural anesthesia can be advantageous as, in case an emergency cesarean section is indicated at a later stage of labor, it avoids the risks associated with general anesthesia (e34).

The risk of shoulder dystocia is not or only insignificantly increased by obesity alone (8, 9). The largest study on this risk found a significant association between BMI and shoulder dystocia (incidence in the total population: 0.9%, OR: 2.0 [1.73; 2.37] for BMI ≥35 kg/m2) (9). However, after adjustment this association was no longer significant (adjusted OR: 1.2 [0.98; 1.37]). The covariates birth weight, gestational diabetes, and gestational age were individually not significant; thus, it appears that the risk increase observed without adjustment is the result of the interaction of these risk factors (9).

The eTable provides an overview over current randomized controlled trials and Table 5 over obesity-related meta-analyses aiming to improve pregnancy outcomes. Lifestyle interventions comprise dietary changes and physical activity. In women desiring to have children, these interventions can increase ovulation and spontaneous conception rates (29, 30, e35, e36). However, patients already scheduled for assisted reproduction treatment did not benefit from weight reduction (30).

Weight loss during pregnancy is associated with a heightened risk of neonatal hypotrophy (e42, e43). Thus, despite the inconsistency of the available data (e44), weight reduction during pregnancy is not usually recommended (e34, e43). By contrast, weight loss between 2 pregnancies has a positive effect on neonatal outcomes (e45). After delivery, however, mothers are generally poorly motivated to actively reduce weight (e46).

Metformin treatment of obese pregnant women was evaluated in 2 randomized controlled trials where it reduced weight gain during pregnancy but did not lower the risk of gestational diabetes and neonatal macrosomia (31, 32).

Gestational weight gain was also reduced by lifestyle interventions; however, no or no clinically relevant reduction of maternal or fetal morbidity was observed in these studies (33–39, e47–e51). However, it appears that intensive and supervised physical activity started early in pregnancy (during first 3 months) can reduce maternal blood glucose levels and the rate of gestational diabetes to a clinically relevant degree (40).

Obesity-related maternal and fetal increases in morbidity during pregnancy are well supported by evidence from studies. Obesity is a risk factor independent of comorbidities such as diabetes. The same applies to excessive weight gain during pregnancy. There is growing evidence that the placenta plays an important role in the regulation of fetal growth. Treatment strategies appear to be promising, provided the following conditions are met:

In principal, weight normalization prior to getting pregnant is advantageous. Ultimately, long-term reduction of maternal and fetal morbidity can only be achieved by dietary and lifestyle changes maintained beyond pregnancy. 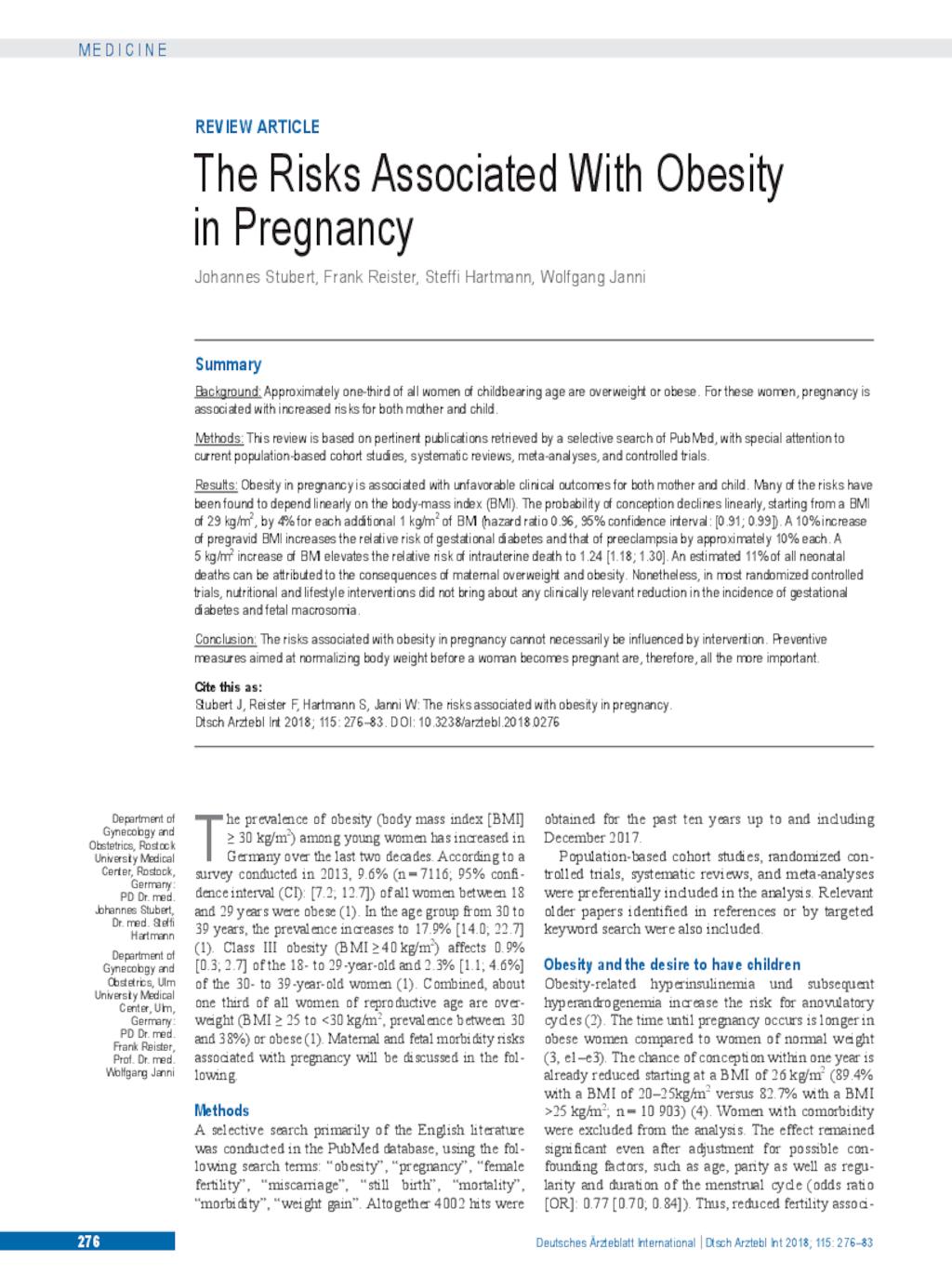