Differential diagnosis in patients with impaired consciousness of unclear origin

Background: Acute and subacute disturbances of wakefulness and cognitive function are common neurological manifestations in the hospital and in outpatient care. An important element of the differential diagnosis was described only a few years ago: autoimmune encephalitis, a condition whose diagnosis and treatment pose an interdisciplinary challenge.

Methods: This review is based on pertinent publications from the years 2005–2017 that were retrieved by a selective search in PubMed, and on the authors’ personal experience and case reports.

Results: The incidence of autoimmune encephalitis in Germany is estimated at 8–15 cases per million persons per year. In some patients with psychotic manifestations or impaired consciousness of acute or subacute onset, an autoimmune pathogenesis can be demonstrated by the laboratory detection of autoantibodies against neuronal target antigens (e.g., glutamate receptors). Testing of this type should be performed in patients with inflammatory changes in the cerebrospinal fluid or on magnetic resonance imaging (MRI), or those who have had an otherwise unexplained first epileptic seizure or status epilepticus. The cumulative sensitivity of testing for all potentially causative antineuronal antibodies in patients with clinically defined autoimmune encephalitis is estimated at 60–80 %. Figures on cumulative specificity are currently unavailable.

Conclusion: The detection of antineuronal antibodies in patients with the corresponding appropriate symptoms implies the diagnosis of autoimmune encephalitis. Observational studies have shown that rapidly initiated immunosuppressive treatment improves these patients’ outcomes. Further studies are needed to determine the positive predictive value of antineuronal antibody detection and to develop further treatment options under randomized and controlled conditions.

Acute or subacute disorders of wakefulness (quantitative impairment of consciousness, ICD-10 R40.-) and qualitative impairment of consciousness (confusion, impaired orientation, amnesia syndromes; ICD-10 R41.-) are frequently occurring causes of hospitalization. In a large neurological emergency department, quantitative disorders of consciousness were the cardinal symptom in every fifth patient seen (reduced vigilance 9%, epileptic seizures 11%) (1). Around 20 to 30% of all hospital inpatients, 50% of elderly patients, and up to 70% of intensive care patients suffer from delirium, i.e., acute deterioration of alertness, organized cognition, memory, attentiveness, and perception (2, e1–e3). Particularly with delirium syndromes the causes are unclear and the treatment principally comprises supportive measures, e.g., management of systemic infections or electrolyte shifts (3).

Recently an additional differential diagnosis has been described, namely a group of previously unknown immune-mediated forms of encephalitis with autoantibodies against neuronal antigens (4). These diseases are rare, but can be clearly delineated from noninflammatory causes with the aid of a rigorous diagnostic work-up for antibodies. Their detection and diagnosis is of great importance, as immune therapy is a causal, frequently successful form of treatment (5). Owing to the wide heterogeneity of immune-mediated forms of encephalitis, these diseases demand close interdisciplinary cooperation on the part of neurologists, intensive care specialists, oncologists, pediatricians, gynecologists, and psychiatrists (eBoxes 2 and 3).

The aim of this review is to impart basic familiarity with autoimmune encephalitis and the diagnostic options for this group of diseases. The following questions are answered:

The PubMed database (www.pubmed.gov) was surveyed for relevant scientific research. The search strategy is described in eBox 1.

Many forms of autoimmune encephalitis manifest as “limbic encephalitis,” i.e., psychiatric symptoms or qualitative impairment of consciousness in combination with epileptic seizures and memory disorders (4). Because the seizures are often not generalized (6), but occur focally as psychomotor episodes with isolated impaired consciousness and disorientation (dyscognitive seizures) (7), these patients often receive an incorrect diagnosis of delirium, encephalopathy, or neurodegenerative dementia (5).

The year 2016 saw the publication of the first consensus criteria for the diagnosis of possible autoimmune encephalitis prior to knowledge of the antibody results (8). The principal warning signs are rapidly progressive (<3 months) qualitative or quantitative impairment of consciousness, lethargy, personality changes, and deterioration of short-term memory. Further diagnostic “red flags” are newly occurring epileptic seizures, psychiatric symptoms, changes in magnetic resonance tomography (MRI) findings in the temporal lobes (bilateral alterations of the mesial portions of the lobes on T2-weighted MRI), inflammatory changes of the cerebrospinal fluid (CSF), and alterations on electroencephalography (EEG) (epilepsy-typical potentials or regional decelerations) (8). In particular, an unprovoked first occurrence of status epilepticus should prompt suspicion of autoimmune encephalitis until another cause is demonstrated (9). In many patients, however, especially the elderly, the memory deterioration takes place over a period exceeding 3 to 6 months and the initially mostly focal epileptic seizures may be misconstrued by the patients and their relatives (10, 11, e4, e5).

It has been known since the 1960s that limbic forms of encephalitis may occur as paraneoplastic neurological syndromes (e6). In these cases the patients are often found to have antibodies to neuronal intracellular antigens (onconeural antibodies) (e7), are mostly elderly, almost always have a malignant tumor, and respond only poorly to immunotherapy (Table).

In 2005, previously unknown antineuronal antibodies were detected in patients with severe encephalitis and benign ovarian teratomas who responded well to immunotherapy. These antibodies were directed at structures located on the surface of axons and dendrites (e8). In time, the N-methyl-D-aspartate (NMDA) receptor was identified as the underlying target antigen (12). Thirteen further “neuronal surface antigens” were identified in the following few years, mostly receptors or synaptic scaffolding proteins (Table) (13).

In some patients the primary trigger factor for autoimmune encephalitis is a (usually previously undetected) tumor that is expressing the target antigen, e.g., ovarian teratoma in the case of anti-NMDA receptor encephalitis (17, 18). The cause of cases of autoimmune encephalitis in which no tumor is demonstrated is unclear, although viral infection (e.g., after herpes [HSV-I] encephalitis) and genetic predisposition have been postulated (19–21) (Figure 1). 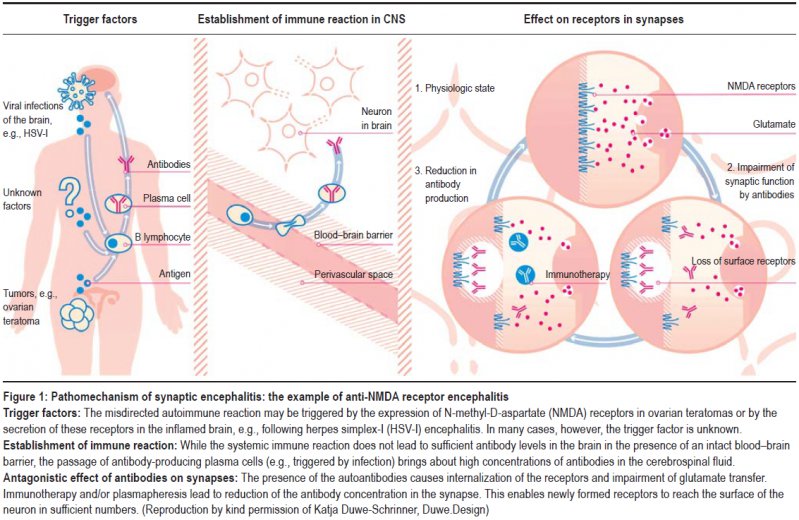 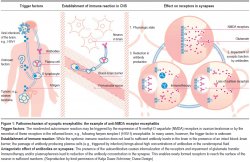 In a second step, probably unrelated events (e.g., systemic infections) (22) lead to migration of autoantibody-producing activated B lymphocytes across the blood–brain barrier into the brain (18). The antibodies that are then produced there exert a direct effect by binding to their target antigens (17, 23, 24). This effect is dose dependent and reversible, comparable with pharmacological inhibition (25, 26) (Figure 1). Therefore, the symptoms of most forms of autoimmune encephalitis with synaptic antibodies can be reversed by early treatment (13).

Cerebral imaging and the general CSF findings—leukocyte count, cytology, and analysis of autochthonous immunoglobulin synthesis—are important for the demonstration of autoimmune encephalitis (24). Both investigations serve above all to narrow down the differential diagnoses (Box). The finding of bilateral temporomesial hyperintensities on T2/FLAIR MRI sequences may point to limbic encephalitis, but in most cases conventional imaging reveals only unspecific changes or a lack of abnormalities (27).

The international consensus, however, is that early diagnostic work-up for autoimmune encephalitis by means of antibody determination is required in all cases of acute or subacute qualitative or quantitative impairment of consciousness in which there is no convincing alternative etiology (Figure 2) (8). This is particularly true in the presence of the following:

As specific biomarkers, antineuronal antibodies in serum and CSF are of key importance (8). Proof of their presence enables both delineation from other differential diagnoses and also identification of the subform of autoimmune encephalitis involved. This differentiation is important for the prognosis and the recognition of a possible tumor association (Table).

In some forms of autoimmune encephalitis, autoantibody testing possesses high diagnostic sensitivity and specificity (e.g., CSF sampling in anti-NMDA receptor encephalitis: specificity 100%, sensitivity 100% [98.5 to 100.0%]) (23). Predictive values cannot currently be ascertained owing to lack of data on prevalence of the antibodies in patients with impaired consciousness from other causes.

However, autoantibodies cannot always be demonstrated in cases where clinical findings indicate that autoimmune encephalitis is probable (8). For this reason the cumulative sensitivity of comprehensive antibody testing for all potential neuronal antibodies is lower (estimated at 60 to 80%) in clinically defined autoimmune encephalitis. No data are yet available on cumulative specificity.

The following aspects have to be taken into account when testing for autoantibodies: 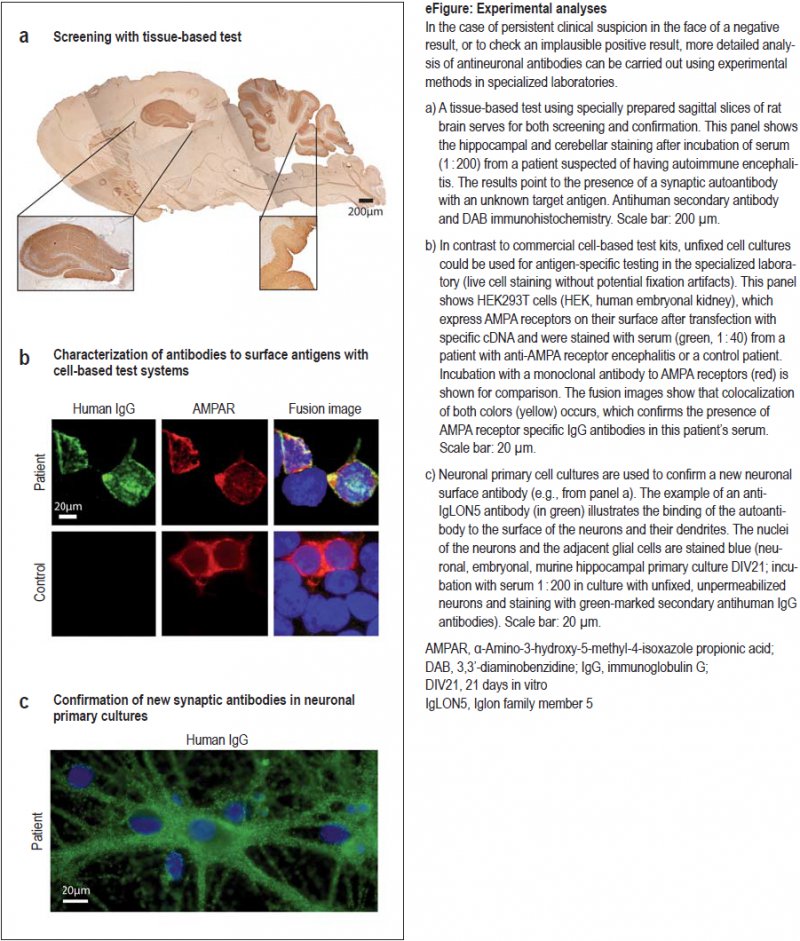 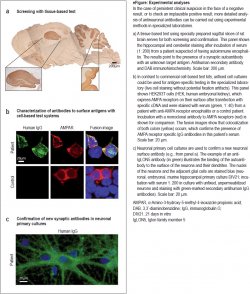 In summary, the following are required for rational antibody diagnosis in patients with qualitative or quantitative impairment of consciousness:

No randomized controlled trials on the topic of treatment for autoimmune encephalitis have been published. Encephalitis with antibodies to neuronal surface antigens generally have a good prognosis provided it is detected promptly and treated at an early stage (28). However, the prognosis in individual cases varies depending on the target antigen of the autoantibody, the presence or absence of associated tumors, the patient’s age, and the severity of the disease (10, 11, 28). For instance, 77 to 98% of patients with anti-NMDA receptor encephalitis are able to live independently by 2 years after diagnosis (multicenter observational study with 577 patients, evidence level III) (28). However, multimodal imaging and neuropsychological testing demonstrated long-term impairment of memory function (35, 36). In LGI1 encephalitis, structural damage to the hippocampus often leads to permanent cognitive deficits (37). These persisting deficits can, however, be prevented by early immunotherapy after the first epileptic seizures (retrospective cohort study, n = 80, 56% cognitive deficits without immunotherapy, 1.3% with immunotherapy, evidence level III) (6). In general, early and adequate immunotherapy seems to be one of the most important prognostic factors (11, 28).

While the swiftest possible initiation of treatment—usually intravenous steroid pulse therapy and plasma exchange—and resection of any underlying tumor are of primary importance, patients who do not respond positively should be given rituximab or cyclophosphamide as early as possible (8, 28). Those who remain refractory to this treatment have benefited from IL6 blockade (tocilizumab) or plasma cell-specific therapy (proteasome inhibitors) (38, 39). Nevertheless, it is not uncommon for a patient to need several months of convalescence with intensive rehabilitation (11, 28). Most cases of monophasic autoimmune encephalitis do not require immune therapy stretching over a period of years (evidence level V), but such measures can be considered in the event of repeated recurrence (evidence level V) (40). All the treatments described above are off label.

Crucial for the collection of data on the whole spectrum of autoimmune encephalitis are national and international networks and registers for this group of diseases (e.g., the German Network for Research on Autoimmune Encephalitis, GENERATE e. V.; www.generate-net.de [in German]).

Conflict of interest statement
Prof. Wandinger worked for Euroimmun up to December 2012. He has received payment for a lecture from the laboratory Dr. Fenner und Kollegen.

All three authors—Prof. Wandinger, Dr. Leypoldt, and Prof. Junker—are employed at a university institute where the work includes investigation of antineuronal antibodies. 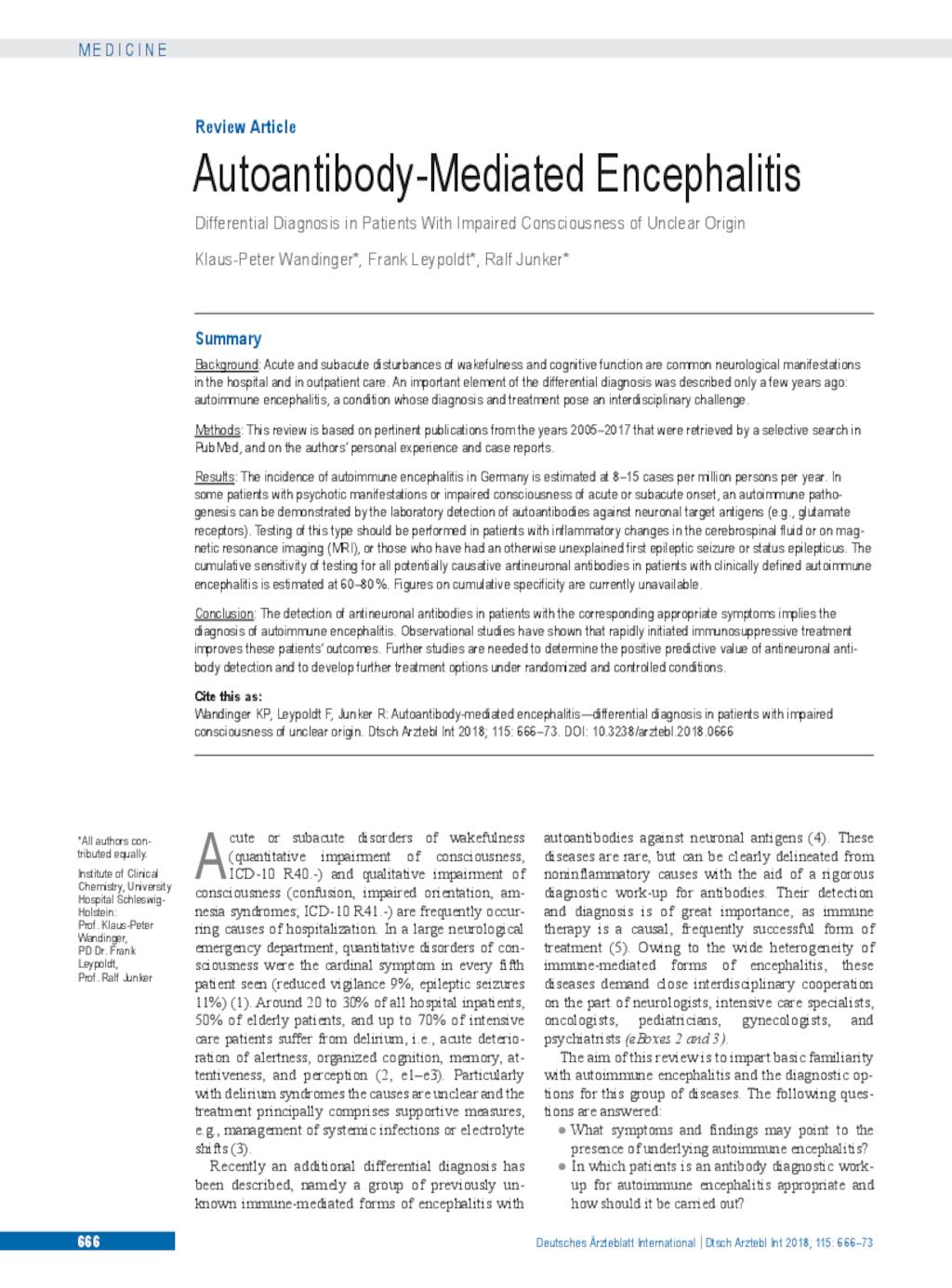