Background: Multiple studies have shown a link between cumulative adverse experiences in childhood and a wide variety of psychosocial problems in later life. There have not been any pertinent representative studies of the German population until now. The goal of this study is to determine the frequency of adverse childhood experiences (ACE), the extent to which they manifest themselves in patterns of co-occurrence, and their possible connection to psychosocial abnormalities in the German population.

Methods: 2531 persons (55.4% female) aged 14 years and up (mean [M] = 48.6 years, standard deviation [SD] = 18) were retrospectively studied for ACE and psychosocial abnormalities by means of the Patient Health Questionnaire-4 (PHQ-4) and further questions on aggressiveness and life satisfaction. The frequency of ACE and their cumulative occurrence were analyzed in descriptive terms. Patterns of simultaneously occurring types of ACE were studied with latent class analysis. Associations between ACE and psychosocial abnormalities were tested with logistic regression analyses.

Results: 43.7% of the respondents reported at least one ACE; 8.9% reported four or more. The most commonly reported ones were parental separation and divorce (19.4%), alcohol consumption and drug abuse in the family (16.7%), emotional neglect (13.4%), and emotional abuse (12.5%). Four ACE patterns were identified by latent class analysis: no/minimal ACE, household dysfunction, child maltreatment, and multiple ACE. In the cumulative model, the high-risk group with four or more ACE displayed a significantly elevated risk for depressiveness (odds ratio [OR] = 7.8), anxiety (OR = 7.1), physical aggressiveness (OR = 10.5), and impaired life satisfaction (OR = 5.1).

Conclusion: Adverse childhood experiences are common, and their cumulation is associated with markedly increased negative sequelae for the affected persons. Preventive approaches are needed that extend beyond the area of child maltreatment alone and address other problems in the parental home, such as mental illness in the parents. Data acquisition by self-reporting is a limitation of this study.

A number of studies have investigated the association between combinations of adverse childhood experiences and negative health outcomes (2). There are strong correlations between adverse childhood experiences and alcohol and drug use (odds ratio [OR] = 10.2, 95% confidence interval: [7.6; 13.7]) and suicide attempts (OR = 37.5 [22.2; 63.3]). The framework model and the assumed underlying mechanism of action are shown in the ACE Pyramid (3). At the center of the framework model are maladaptive behaviors, i.e. behaviors that are unfavorable/harmful to health and that are seen as coping strategies and make illnesses or social problems more likely (1, 3). Consequences of adverse childhood experiences can be immediate, such as symptoms of posttraumatic stress following sexual abuse, but may also occur after a lengthy delay (this is particularly common with physical consequences), like those associated with risky behaviors such as smoking. The United Nations have set themselves Sustainable Development Goals to be achieved by the year 2030. In connection with the United Nation’s Development Goals 3 (reduce premature mortality) and 16.2 (end all forms of violence against children) (4), this study provides the first estimates of the frequency of adverse childhood experiences in Germany and their effects through adulthood.

The study included 2531 participants. Nationwide data collection was performed via an independent institute for polling and social research (USUMA, Berlin) between November 2017 and February 2018. The inclusion criteria were a minimum age of 14 years and sufficient knowledge of German (see eMethods for details of the study design). Informed consent was a requirement for study participation. The study was approved by the Ethics Committee of the Faculty of Medicine of Leipzig University.

Sociodemographic information such as age, sex, marital status, number of children, level of education, and religious affiliation was taken from all participants. Equivalent income according to the OECD (Organisation for Economic Co-operation and Development) (10) was also calculated.

Adverse childhood experiences were recorded using the German version (11) of the ACE Questionnaire (1). This consists of 10 items on child maltreatment and problems in the parental home, with yes/no answers (eBox 1). As in previous studies, a total score was used to investigate the risk of an effect of combined adverse childhood experiences (2, 12).

Physical aggression was investigated using the question “Have you physically attacked (e.g. hit, slapped in the face, pulled hair, threatened with a weapon or other object) anyone in the past 12 months?” The answers to this question were either yes or no.

Life satisfaction was recorded using the question “This question is about your general life satisfaction. How satisfied are you at the moment with your life in general?” The participants could answer this question using an 11-point scale ranging from “not at all satisfied” to “completely satisfied.”

When indicators for adjustment of the model and interpretation of the findings are examined, a model with 4 prototypical patterns best describes the overall occurrence of adverse childhood experiences (eTable 3). Figure 1 shows the 4 groups. The frequency of psychosocial issues in the sample as a whole and in the individual groups is shown in Figure 2. The probability of classification in the first group, “no/minimal adverse experiences,” was 0.96; for the second group, “problems in the parental home,” it was 0.78; for the third group, “child maltreatment,” it was 0.80; and for the fourth group, “multiple adverse childhood experiences,” it was 0.91. In group 4, “multiple adverse childhood experiences,” there were high odds ratios for current depression (OR = 5.3), anxiety (OR = 5.7), physical aggression (OR = 13.4), and low life satisfaction (OR = 5.0).

The risk of symptoms of depression, anxiety, physical aggression, and limited life satisfaction have not yet been well researched (2). Compared to the findings of a recent meta-analysis (2), the findings described here on the correlation between 4 or more adverse experiences and depression, anxiety, and physical aggression are very strong, while the association between these and limited life satisfaction is moderate. This should be emphasized, because the wording of the question on physical aggression suggests there may be a tendency to give socially desirable answers. This study provides evidence that there is a significant correlation here that may be underestimated in these findings.

Adverse childhood experiences were self-reported retrospectively and may therefore be subject to biases and suggestibility. The possibility of false negative answers when recording adverse childhood experiences has been discussed in the literature (17). In addition, the Adverse Childhood Experience Questionnaire contains questions concerning specific experiences, but the wording of the questions allows room for interpretation. This means subjective assessments are recorded, so in principle there is a risk of false positive answers too. In our view, however, this risk should be assessed as low, due to the existing evidence (17). In addition, individual adverse childhood experiences are recorded using only a few questions. Studies show that the prevalence of specific forms of abuse rises with the number of questions used (18). The prevalence of some adverse childhood experiences may therefore be underestimated. It should also be noted that the number of reported adverse childhood experiences varies in line with the number of family members. The approach selected for this study may also have systematically excluded potential high-risk populations. Because questionnaires were used, individuals with insufficient knowledge of German were systematically excluded, so people with German citizenship are substantially overrepresented and those from a background of migration are potentially underrepresented. However, care was taken to ensure that the sample was as representative as possible; differences between the sample and the general population are shown in eTable 4. This should be taken into account when interpreting the study findings.

eTable 4
Differences between the sample and the general German population, based on data from the German Federal Statistical Office (Statistisches Bundesamt)
Enlarge All figures

In addition to child maltreatment, adverse childhood experiences under the heading “problems in the parental home” are common in the general German population (43.7% report at least one such experience). In particular, the high-risk group with 4 or more such experiences shows a high risk of various issues, health problems, and increased mortality (2); 8.9% of the German population fall into this category. The findings shown here highlight the correlation between adverse childhood experiences and psychosocial issues concerning life satisfaction, psychopathology, and interpersonal aggression.

There are numerous debates in German health care on subjects such as “child maltreatment” (19), “domestic violence” (20), “children of parents with addiction or mental illness” (21), etc. However, the cumulative effects of multiple adverse experiences have rarely been examined. The findings described here underline the clinical significance of emotional abuse and emotional neglect, which in Germany have to date been only marginally addressed in physicians’ debates on child protection. In view of the considerable negative consequences for those affected and the high prevalence of various adverse childhood experiences under the heading “problems in the parental home,” an increased focus on these factors in everyday clinical practice is important. Problematic characteristics in the parental home are often easier to access in clinical history than concrete evidence of abuse or neglect. Precisely because the mechanisms via which adverse childhood experiences affect health and wellbeing throughout one’s life are increasingly well researched, this knowledge must be taken into greater account in health care when designing selective, indicated prevention and intervention (including early intervention) measures (22).

eTable 4
Differences between the sample and the general German population, based on data from the German Federal Statistical Office (Statistisches Bundesamt)
Enlarge All figures
The Prevalence and Consequences of Adverse Childhood... 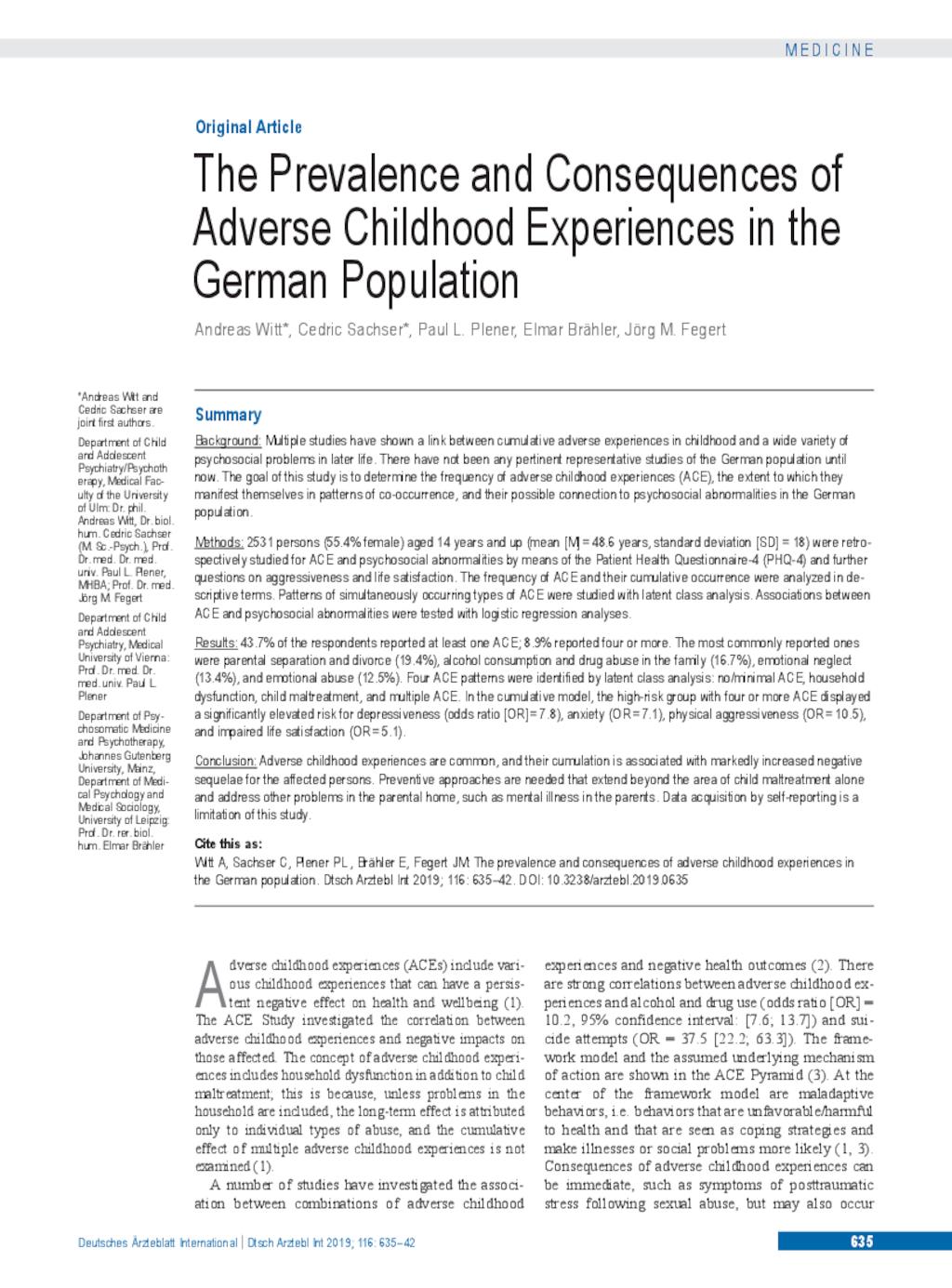