Background: Just under 3% of children in Germany, and approximately 6% of children in some other countries, such as Denmark, are now being conceived with the aid of in vitro fertilization (IVF) technology. Alongside the increased risk of organ malformation, there is now evidence for functional abnormalities due to epigenetic modifications.

Methods: This review is based on pertinent publications retrieved by a literature search on currently known associations of IVF therapy with malformations and functional abnormalities. The potential implications for the treatment of infertility are discussed.

Results: The risk of congenital malformations is approximately one-third higher in children conceived with the aid of IVF technology than in other children; specifically, there is an odds ratio (OR) of 1.29 (95% confidence interval, [1.03; 1.60]) for cardiac malformations, and there is a relative risk (RR) of 1.35 ([1.12; 1.64]) for musculoskeletal malformations and 1.58 ([1.28; 1.94]) for genitourinary malformations. The risks of preterm birth and low birth weight are, respectively, 1.7 and 1.5 times higher in IVF singleton pregnancies than in non-IVF pregnancies. Cardiovascular changes are the main type of functional disturbance. Some of the risks associated with IVF have decreased in recent years. An association has been revealed between cardiovascular abnormalities and epigenetic modifications; the causes are thought to include not only maternal and paternal factors, but also the IVF techniques that are used. A modification of IVF therapies might lower the risks, but might also lower the success rate.

Conclusion: For the well-being of the children to be conceived, IVF therapy should only be carried out in cases of infertility that cannot be treated by any other means, as the precise causes of the risks of IVF to child health are unclear.

Today, almost 3% of all children in Germany—and in countries with a very liberal reimbursement policy, such as Denmark, as much as 6% of all children—are conceived by in vitro fertilization (IVF). In other words: In every class at school there is one IVF child.

Given the large number of IVF children, any potential IVF-induced health problem of the offspring would be relevant, both from a medical and social perspective. New studies by a Swiss working group (1, 2) on functional cardiovascular changes attracted international media coverage and triggered a public discussion on the health risks of IVF therapies which left many couples unsettled. Epigenetic modifications have been proposed as one mechanism underlying the reported cardiovascular changes, which appear to be of maternal and paternal nature, but may also be triggered by IVF treatment.

Thus, in addition to the probabilities of congenital malformations and functional abnormalities in IVF children, this article will describe the mechanisms and the relevance of epigenetic modification and finally discuss the possible consequence for sterility treatment.

The risk associated with IVF technologies were analyzed. The definition of IVF covered all in vitro fertilizations, irrespective of the technology used (insemination or intracytoplasmic sperm injection [ICSI]) and irrespective of whether the embryos were used fresh or after cryopreservation.

The risks of congenital malformations and obstetric adverse events after IVF treatment have already been assessed in numerous meta-analyses and are supported by scientific evidence. Thus, we searched only the PubMed database and restricted the search to meta-analyses published between January 2015 and May 2019. The search terms “in vitro fertilisation” AND “meta-analysis” AND “malformation” were used.

IVF-induced functional health impairments have been discussed for years, but meta-analyses on the subject are scarce. Therefore, the literature search was extended to include systematic reviews. The following search terms were used: “in vitro fertilisation” AND “meta-analysis” OR “systematic review” AND “offspring” OR “babies” AND “blood pressure” OR “obesity” OR “glucose” OR “lipid” OR “cognitive development” OR “bone age” OR “depression” OR “attention deficit disorder” OR “thyroid” OR “autism” OR “cerebral palsy” OR “neurodevelopmental delay”.

New evidence of epigenetic modifications induced by the process of IVF has so far only been found in individual references; therefore, a selective search of the literature was conducted for this topic.

Malformations in children conceived by in vitro fertilization

The latter result was largely confirmed by the meta-analysis by Zheng et al. (4) which, however, found an increased risk of chromosomal abnormalities in multiple pregnancies (RR: 1.36 [1.04; 1.77]).

Giorgione et al. (6) performed a meta-analysis based on 8 cohort studies with children after IVF and children after spontaneous conception (Table 1). Both single and multiple pregnancies were included. Heart defects were observed in 1.3% and 0.68% of IVF children and spontaneously conceived children, respectively (pooled OR: 1.45 [1.20; 1.76]). The increased risk persisted if only singleton pregnancies were included (OR: 1.55 [1.21; 1.99]) and multiple adjustments were made (pooled OR: 1.29 [1.03; 1.60]).

Obstetric risks in children conceived by in vitro fertilization

Obstetric risks were also increased in multiple pregnancies, but this increase was less pronounced compared to the increase observed with singleton pregnancies. Qin et al (8) included 39 cohort studies on multiple pregnancies with a total of 38 053 children after IVF and 107 955 children after spontaneous conception in a meta-analysis. The increased relative risks for preterm birth and low birth weight after IVF were 1.08 [1.03; 1.14] and 1.04 [1.01; 1.07], respectively.

Functional abnormalities in children conceived by in vitro fertilization

Guo et al. (11) carried out a meta-analysis of 19 studies in which 2112 IVF children and young adults were compared with 4096 spontaneously conceived individuals (Table 1). The systolic blood pressure of the IVF offspring was found increased by 1.88 mm Hg [0.27; 3.49] and the diastolic blood pressure by 1.51 mm Hg [0.34; 2.70]. Furthermore, according to five studies which compared 402 IVF children to 382 spontaneously conceived children, the cardiac diastolic function was suboptimal and the blood vessel thickness was higher.

To evaluate the aspect of glucose metabolism, 7 studies including 477 IVF children were compared with 1852 spontaneously conceived children (11). While fasting insulin levels of IVF children were significantly increased (0.38 mIU/L [0.08; 0.68]), no significant difference was found for fasting glucose levels (−0.03 mM [−0.13; 0.06]) and insulin resistance, measured using the homeostasis model assessment (HOMA) index (0.02 [−0.06; 0.12]). Overall, the comparisons revealed only a trend towards abnormal glucose metabolism.

There is no conclusive evidence of an increase in birth weight or relevant abnormalities of lipid metabolism.

Rumbold et al. (14) conducted a systematic review including 7 studies on cognitive development of IVF children. Children conceived with IVF treatment without fertilization with ICSI showed no impairment in cognitive development. However, the data for IVF treatments with fertilization with ICSI were less clear. Three studies compared IVF children with IVF/ICSI children. One study showed a significant increase in the risk of cognitive impairment in IVF/ICSI children, one study found that the intelligence quotient was on average 3 points lower in IVF/ICSI children and one study showed no difference.

Catford et al. (15) arrived at a similar conclusion in a systematic review focusing on psychosocial health in IVF children without and with ICSI fertilization. The neurological development of children aged two months to 7.5 years was monitored in 22 studies. Fourteen studies used spontaneously conceived children for comparison. ICSI-conceived offspring appeared to be at an increased risk of cognitive impairment (5/14 studies) and autism (2 studies). The risk of autism was particularly high when sperm after testicular sperm extraction was used (RR: 3.29 [1.58; 6.87]), but also when ICSI was performed in absence of an andrological factor (RR: 1.57 [1.10; 2.09]). However, in both samples this effect was no longer significant when only singletons were included in the analysis.

Epigenetic risks and the temporal association of IVF processes and epigenetic programming are shown in the Box and in the Figure.

This paper covers a wide range of aspects, from malformations and functional abnormalities in IVF-conceived children to the risk of epigenetic changes to possible implications for treatment. The broad range of the topics covered reduces the level of detail; however, this only plays a minor role in the general discussion of risks in daily practice.

The studies described in this review showed numerous increased health risks in IVF children (Table 1). Does this mean that IVF technology is causal per se? Or are infertility or other risk factors, such as paternal age, responsible for these risk increases (24)?

There are two possible study approaches that can be used in an attempt to answer these questions. One research strategy could be to compare IVF-conceived offspring with spontaneously conceived offspring of subfertile parents. One definition of subfertility is more than 1 year of trying to conceive before pregnancy occurs. The other strategy could be to study siblings of the same biological mother who gave birth to both IVF-conceived and spontaneously conceived children.

For the second approach, the comparison of siblings, Pinborg et al. (25) combined two studies, adjusted, among other factors, for maternal age, parity and year of birth, to perform a meta-analysis. The proportion of spontaneously conceived children in the meta-analysis population was about the same as that of their IVF-concieved siblings born before or after them. The IVF children had an increased risk of preterm birth, with an aOR of 1.27 [1.08; 1.49].

In summary, both study approaches show that the risk of an adverse peripartum outcome is increased in IVF-conceived children, even if almost identical control groups are selected; overall, however, this increase is smaller than the risk increase found when all spontaneously conceived children are used for comparison. This means that both infertility and IVF technology appear to be risk factors.

In this article, only meta-analyses or, where appropriate, systematic reviews were analyzed in order to be able to find clear answers to the question of potential health risks, based on a large number of studies. However, the disadvantage of relying on these large meta-analyses is that changes over time cannot always be recognized.

A similar approach was taken by Guo et al. (11) to evaluate blood pressure over time. While, as discussed already, overall systolic and diastolic blood pressure levels were found increased in IVF children compared to spontaneously conceived children, separate analyzes of the 1990–1999 and 2000–2009 cohorts showed elevated blood pressure levels in the older cohorts, but no longer in the younger cohorts (2000–2009: systolic blood pressure [BP]: –0.19 [–1.38; 1.00]; diastolic BP: –0.19 [-1.38; 1.00]). This observation was independent of the proportion of ICSI fertilizations and the age of the children studied.

Overall, the risk for some IVF-induced health impairments appeared to decrease over the years. The possible mechanisms underlying these changes can only be speculated upon. Among the possible causes are a change in the patient population and the use of different IVF technologies.

The IVF technique itself also seems to have impact on health risks. However, whether IVF-related epigenetic modifications play a causative role or whether other factors are involved, remains unclear. What is certain, however, is that data are available for every IVF technology—although in some cases only from animal models—supporting the possibility of a causal relationship. For this reason, Table 2 breaks down the individual IVF technologies, but also the genetic and environmental factors. In addition, suggestions for possible modifications to reduce risk are made. However, the currently available data do not allow to draw definite conclusions on intervention options.

IVF is associated with an increased health risk for the offspring in the form of malformations, functional disorders, and a poorer peripartum outcome. This is possibly caused by parental factors, but also by factors related to the IVF technology used. Even though some of these risks have decreased over the years, an increased health risk can still be assumed. Consequently, IVF should only be performed if a pregnancy cannot be achieved in another way.

Prof. Haaf declares that no conflict of interest exists. 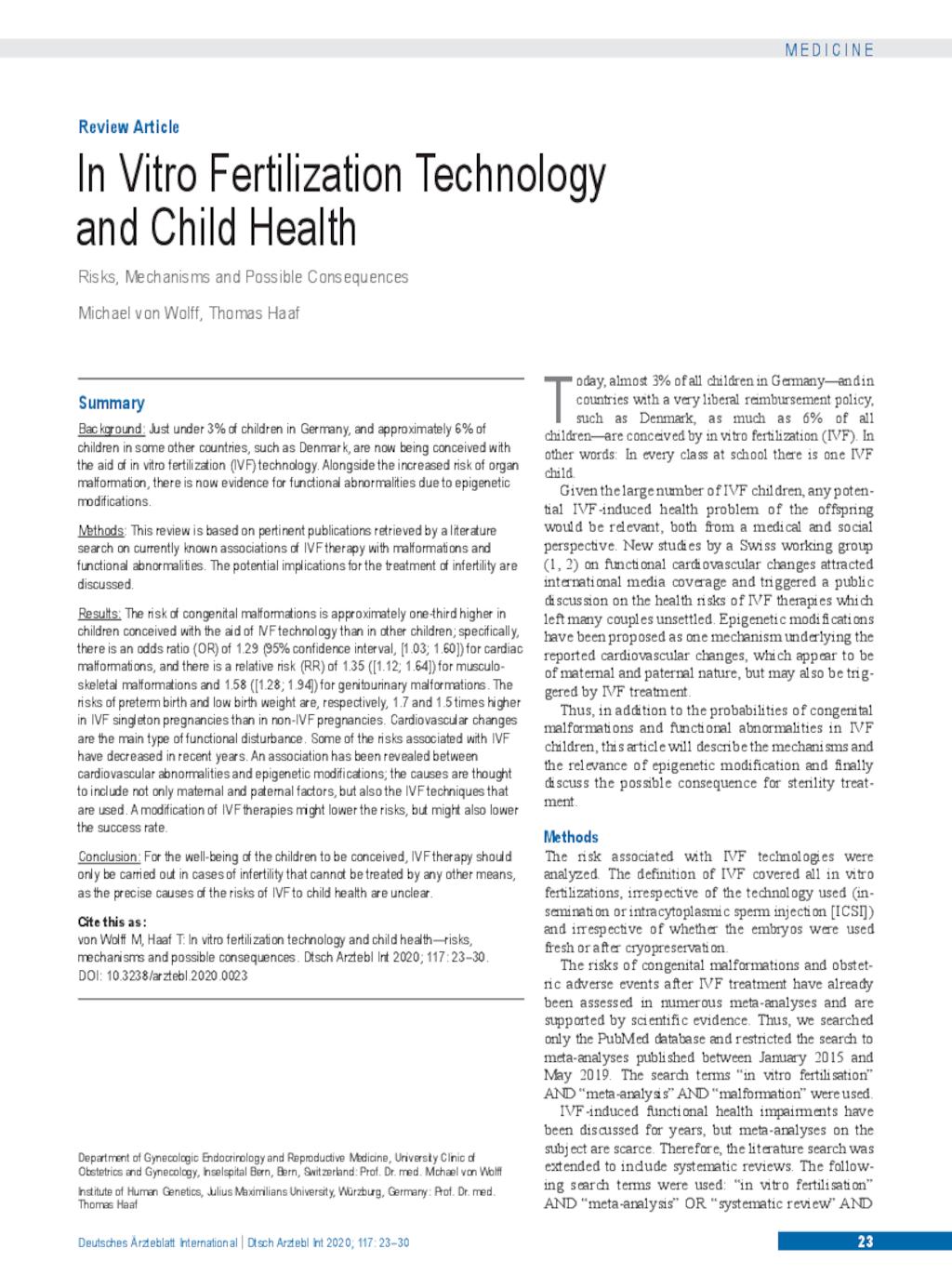