The article by Rittberg et al. in this issue, which takes up the topic of forced centralized allocation of patients to hospitals by the emergency services, is the first to describe an alarming development taking place in the German public healthcare system at the interface between prehospital and hospital-based emergency care (1).

The study is based on data from an interdisciplinary care capacity proof system (IVENA) released by hospitals for the guidance of the emergency services to assist them in sending the right patient at the right time to the facility best able to care for that patient. Hospitals notify their capacity in real time, thus indicating to the emergency control centers when they are unable to offer emergency care from time to time, e.g., due to lack of treatment capacity, lack of staff, or equipment failure. Temporary “closure” of this sort is not binding on the control centers, however, since—as the authors point out in their introductory remarks—it runs counter to doctors’ ethical and professional obligations, and in fact turning away an emergency patient constitutes a failure to provide assistance and as such is an offense under German law. On the other hand, however, if a hospital does not declare temporary closure when it is experiencing a care bottleneck, and if this leads to a situation where, after receiving acute care in the emergency department, the patient has to be transported elsewhere—or in which acute care actually cannot be provided due to lack of staff or equipment—this creates an ethical dilemma, not to mention a medicolegal one, for both the patient and the hospital and the doctors in charge.

Although emergency departments, as links in a cross-sectoral emergency rescue chain, are the focus of the article, their temporary closures constitute a serious warning signal of an urgent need for interventions not merely in terms of emergency department process optimization, but also in the inpatient part of the care system (2).

Overcrowding such as is often described in emergency departments, combined with a lack of options for patient onward transfer from the emergency department (exit block), e.g., due to lack of beds or to beds being “closed” for lack of staff), constitutes a major risk factor for all emergency patients (3, 4, 5).

From the point of view of emergency service personnel (doctors and paramedics), this risk has to be weighed against the opposing risk that any patient subjected to an increased transport time, or taken to a hospital offering a lower level of care, may be presumed to have received suboptimal medical care.

In 2019, forced centralized allocation, mostly of patients with a life-threatening condition, affected 1 in 14 emergency patients in the Greater Munich area, whereas in 2013 this was the case for fewer than 1 in 100. Every year, forced centralized allocations were highest in the first 3 months of the year. From the emergency services point of view, the reasons for this phenomenon, now described for the first time, range from increased emergency services callouts to a seasonally increased incidence of acute respiratory disease, e.g., during an influenza epidemic (6). On the part of the hospitals, seasonally increased illness is mentioned, but so is understaffing, both in terms of lack of recruitment to empty staff positions and closely calculated staffing levels, leading to a reduction in the number of beds that can be kept “open.” Approaches to solving the problem include organizational interventions and the development of early warning systems that will allow a dynamic response to particular events (7).

The analysis in the article focuses on a hole in the net of the German healthcare system and should prompt far-reaching discussion. In recent years, the mission of the emergency services and the provision of hospital bed capacity have been considered primarily as an aspect of healthcare costs, sometimes also from a political point of view—but rarely have they been looked at or researched into as interlocking parts of an emergency rescue chain (8).

To bring about change on the basis of the article by Rittman et al. (1), it is important not to leap to overhasty conclusions. Answers are still needed to the following questions:

The way in which “interdisciplinary care capacity notification” functions also needs critical reassessment. Temporary closure cascades and tactical maneuvering by means of closures on the part of individual hospitals cannot be ruled out. Questions in this area could include:

The reactions of the emergency services, and the consequences of these, also need to be examined more closely:

Institutional structures rather than emergency plans

The 2018 regulations instituting a tiered system for the structural organization of emergency care in hospitals in Germany were the first step towards defining a framework within which the core responsibilities of emergency departments can be fulfilled (9). Further regulations should now follow that will make it possible to ensure their operational capacity and seamless interlocking at the prehospital/hospital interface between the different elements of the emergency rescue chain, even under conditions of overcrowding. Temporary closures of emergency departments to new patients, therefore—which can be expected at least seasonally and, more recently, also during pandemics—should then become more the exception again rather than the rule (10).

Given all this, the article by Rittberg et al. (1) can be taken as an invitation to further health services research. Preventing care bottlenecks, with the risks to patients they entail, requires not contingency plans, but organizational structures.

Thanks are due to the authors, and to the Deutsches Ärtzeblatt, for picking up this subject and giving it the important first push. 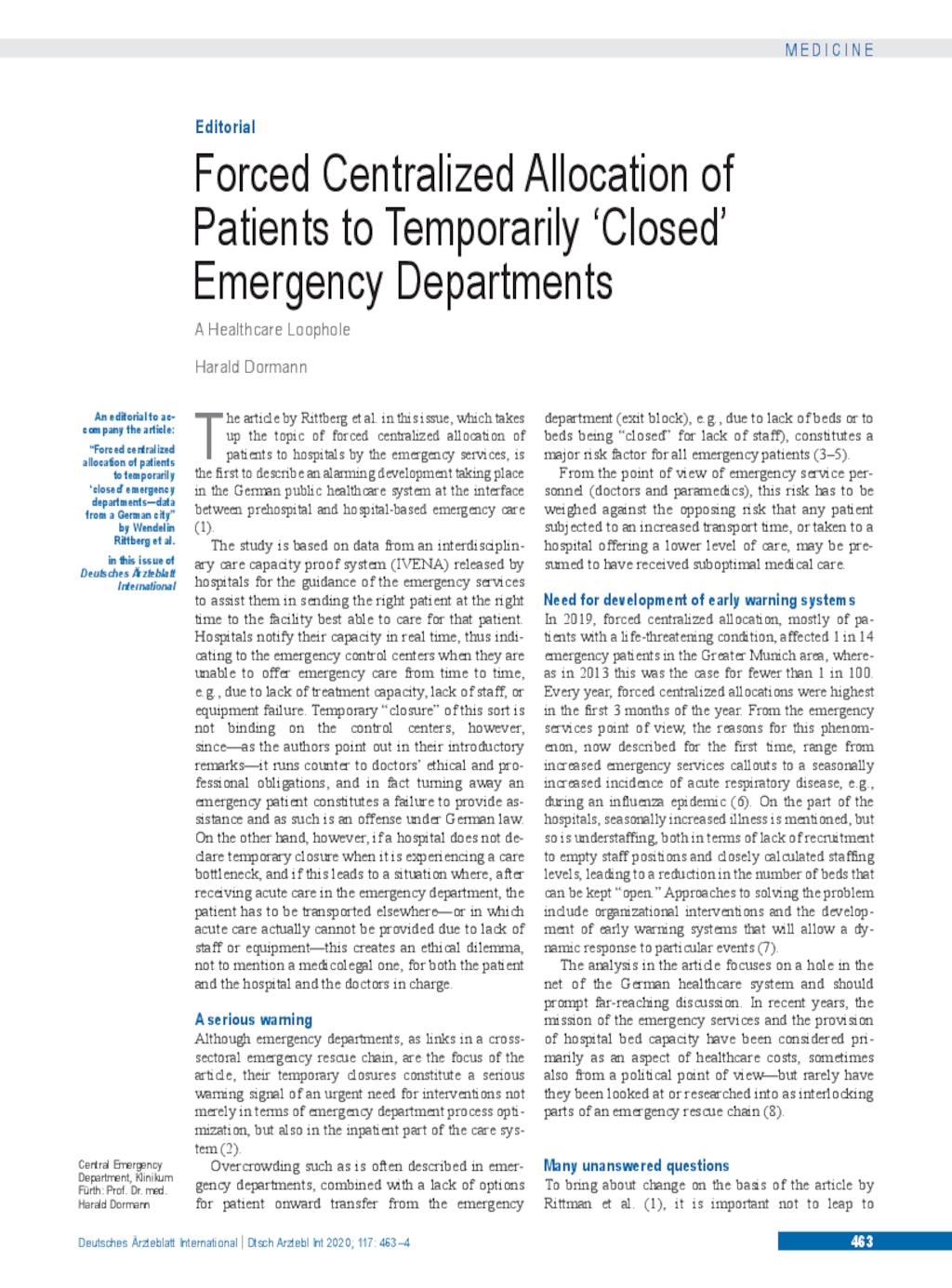