Invasive Brain Stimulation in the Treatment of Psychiatric Illness: Proposed Indications and Approaches

Background: Drugs, psychotherapy, and other treatment modalities are effective for many patients with mental illness. Nonetheless, many patients do not achieve a total remission with the currently available interventions, and the recurrence rates are high. As part of the ongoing search for further treatment options for refractory disorders, there is renewed interest in focal neuromodulatory techniques, including invasive ones, and deep brain stimulation (DBS) in particular.

Methods: In this review article, a group consisting of neurosurgeons, psychiatrists, and one practicing ethicist/neurologist summarizes the main aspects of the use of DBS to treat mental illness and offers recommendations on its indications and practical implementation.

Results: The efficacy of DBS against mental illness has not been confirmed in the randomized, controlled trials (RCTs) that have been published to date. This may be because the follow-up times were too short. In contrast to the negative RCTs, case series have indeed shown a positive effect of DBS on severe depression, but this effect can only be seen several months after the operation.

Conclusion: DBS may be a therapeutic option for selected patients with otherwise intractable mental illness. Patients should only be treated in the setting of clinical trials. RCTs with longer follow-up times must be conducted in order to substantiate, if possible, the promising evidence that has been found in case series.

Numerous definitions of treatment-resistant depression (TRD) have been proposed over the last 30 years, many of which are similar or overlapping. Although there are still no established, formal diagnostic criteria, general agreement has developed over time concerning the main features of TRD:

Thase and Rush (2) count the failure of electroconvulsive therapy (ECT) as a further criterion of TRD. 20–30% of patients with depression benefit only to a small extent, or not at all, from the treatments available to date.

The criteria for treatment resistance are even less precisely defined for obsessive-compulsive disorder (OCD) than for depression. Both of these diseases are characterized by an incomplete understanding of the underlying biological disturbances, along with a wide variety of treatments currently in use. Trial-and-error remains the guiding principle of pharmacotherapy for both.

Focal neuromodulation is an alternative, non-pharmacological, but still biologically-based form of treatment for hitherto intractable depression and OCD. The term “neuromodulation” refers to a direct, reversible alteration of the function of a neural structure in order to change activity in a neural network of brain regions participating in the processing of affective stimuli. The types of invasive neuromodulation now being used to treat mental illness were developed on the basis of knowledge derived, both from functional imaging of network dysfunction in depression and OCD and from earlier clinical experience with lesioning techniques.

Neuromodulatory approaches to the treatment of intractable mental illness are based on a neural network theory in which it is postulated that a certain set of structurally and functionally connected regions of the brain work together to maintain normal regulation of mood (3, 4). Some types of dysfunction in affective disorders can be described as resulting from faulty communication between nodes of this network (5). Such communication takes place both by chemical means (neurotransmitters) and via electrical signaling; there is thus, theoretically, an opportunity for either pharmacological or electrostimulatory intervention, the latter being useful particularly in cases that are resistant to pharmacotherapy.

The efficacy of deep brain stimulation against treatment-resistant depression

Depression, one of the more serious diseases affecting mankind, affects approximately 20% of all individuals at least once over the course of a lifetime (6). According to the World Health Organization (WHO), more than 300 million people suffer from depression at any given moment (point prevalence) (7). Although many patients can benefit from effective treatment, 20–30% suffer from intractable depression. For some of them, deep brain stimulation (DBS) is a possible treatment option.

Among the recent publications on DBS for depression, the earliest appeared at the beginning of the present century. Mayberg and Lozano (8) were the first to report on stimulation of the subgenual cingulate (SCG, cg25) in a series of six patients. Four of them displayed a significant response to treatment at six months, meaning that their symptoms, as rated on a scale such as the Hamilton Depression Rating Scale (HDRS), improved by at least 50%. Another target region for DBS in depression is the nucleus accumbens septi (NAC); successful stimulation of this target was also reported early on, in small case series (the earliest one consisted of 3 patients) (9). Further targets studied included the inferior thalamic peduncle (ITP), the bed nucleus of the stria terminalis (BNST), and the superolateral branch of the medial forebrain bundle (slMFB) (10). Stimulation of the last-named target (in small case series, as with the other targets) yielded a significant antidepressant effect in up to 85% of the patients so treated, in the experience of multiple centers (11, 12, 13, 14); the effect persisted for up to at least 50 months (12). The brain regions most commonly used as targets in uncontrolled trials are currently the subgenual cingulum (SCG), the ventral capsule/ventral striatum (VC/VS), and the nucleus accumbens septi (NAC). Significant treatment responses have been reported in up to 60% of the severely affected patients in these uncontrolled studies and small case series (10).

An overview of the randomized, controlled trials that have been performed to date (13, 15, 16, 17, 18, 19, 20) can be found in the Table, as well as in three recent reviews on the efficacy of deep brain stimulation for depression (10, 21, 22). The results of the uncontrolled case series (eTable) could not be replicated in two large-scale, double-blinded, randomized, multicenter trials (18, 19). The authors of the present review would like to point out that an unexpectedly large number of patients displayed improvement of their depressive symptoms only after the end of the blinded phase (23). We suspect the main problem was that the period of observation was too short: four months are not a long time in the life of a patient who has been suffering for decades from a single, unending depressive episode . The two RCTs provide too little information about the potentially beneficial effect of DBS in these target regions for patients with intractable depression, an effect which may yet be real and therapeutically highly relevant. They can perhaps be best understood as a premature attempt to commercialize DBS for depression before there was any real understanding of the specific properties of the different target areas – in contrast to, for example, the successful use of DBS in the treatment of Parkinson’s disease (24).

Table
Randomized, controlled trials on the efficacy of DBS against intractable depression
Enlarge All figures

In summary, the efficacy of DBS against depression has not yet been convincingly demonstrated. This is due, in part, to the fact that a variety of different targets and stimulation frequencies were used, with varying postoperative periods of observation, in small, uncontrolled studies.

Intra- and postoperative complications of deep brain stimulation in general

In a study of DBS in 25 patients, one patient reportedly became severely nauseated intraoperatively, four attempted suicide, and two others had suicidal ideation (17). Other documented side effects included agitation (7 patients), disinhibition (e.g., loquacity) (6 patients), and perceived vibrations of the neurostimulator (3 patients). In another study involving seven patients, eleven severe complications were documented, four of which were related to the stimulating electrode; two patients committed suicide (20). It must be borne in mind that patients undergoing DBS for psychiatric indications have been severely mentally ill for many years and are thus at high risk of suicide and, possibly, other comorbidities.

The ethical evaluation of DBS for mental illness does not require any specific, additional ethical criteria beyond those that are already customary, well-established, and generally accepted in medical research and treatment, namely: beneficence/utility, non-maleficence, respect for the patient’s autonomy, and equitable access and distribution (27, 28). These four criteria should not be applied to a prospective DBS procedure in isolation, but also to any alternative forms of treatment being considered at the same time, such as psychoactive drugs or psychotherapy, so that the ethical aspects of all potential treatments can be weighed against each other (28). Much useful information can be gained by analogy and extrapolation from the more than 30 years of research and clinical experience on DBS for other indications (e.g., Parkinson’s disease). Research on DBS performed specifically to treat mental illness should be designed to yield data not only on neuropsychiatric outcomes in the narrow sense, but also on further ethically relevant outcomes. Thus, the study and ethical evaluation of the utility of DBS must not solely be based on statistically measurable effects in clinical and performance-based outcome measures; they must also take account of individually meaningful goals that are relevant to the patient’s everyday life (Box). It follows that:

Box
The authors’ proposals for practical implementation
Enlarge All figures

The benefit of the operation must be weighed against its risks (bleeding and infection, both of which have a probability of less than 1%), as well as the implantation of a device that will presumably have to remain in place for the rest of the patient’s life. The implant may adversely affect future diagnostic studies of various kinds (e.g., MRI) and even certain kinds of everyday activity (e.g., passing through security checkpoints involving magnetic fields). Patients with mental illness for whom DBS is considered, like patients with advanced Parkinson’s disease, are a highly vulnerable group whose underlying illness can strongly affect their ability to form and express a clear intention about surgery. This fact should be borne in mind during the process of patient evaluation, information, and counseling, which should be conducted by an experienced psychiatrist (or more than one), always in multiple sessions with the patient. For the time being, DBS for psychiatric indications should only be performed in the setting of clinical trials, so that data on its benefits and risks, on patients’ decision-making processes, and on resource utilization can be collected systematically over time. In rare, exceptional cases of patients with especially severe disease and an adequate evidence base for treatment, surgery outside of a clinical trial can be considered, but then only on the basis of an explicit protocol resembling that of a clinical trial (a so-called n-of-1 trial), so that the treatment can be carried out and documented in standardized fashion. Such cases can be entered into an international neuromodulation experience registry for DBS studies in psychiatric research, where the relevant data are systematically recorded (29).

We would like to thank Hannah Kilian and Dora Meyer, consultant psychologists in the Section of Interventional Biological Psychiatry, for revising the manuscript, and Prof. Dr. med. Frank Jessen of the Department of Psychiatry and Psychotherapy at the University of Cologne for reading the manuscript and making valuable contributions to it.

Prof. Voges has served as a paid consultant to the Functional Neuromodulation company and has received lecture honoraria from Medtronic.

Prof. Coenen has served as a paid consultant for, and received research funding from, the Medtronic and Boston Scientific companies. He has received lecture honoraria and reimbursement of travel expenses from Boston Scientific.

Prof. Meyer-Lindenberg has received lecture honoraria from Lundbeck and funding for the performance of clinical trials on behalf of the Takeda, Lundbeck, Sage, and Acerus companies.

The remaining authors state that they have no conflict of interest.

Box
The authors’ proposals for practical implementation
Enlarge All figures

Table
Randomized, controlled trials on the efficacy of DBS against intractable depression
Enlarge All figures

eTable
An overview of all studies (other than single case reports) on the efficacy of deep brain stimulation against intractable depression
Enlarge All figures
Invasive Brain Stimulation in the Treatment of Psychiatric... 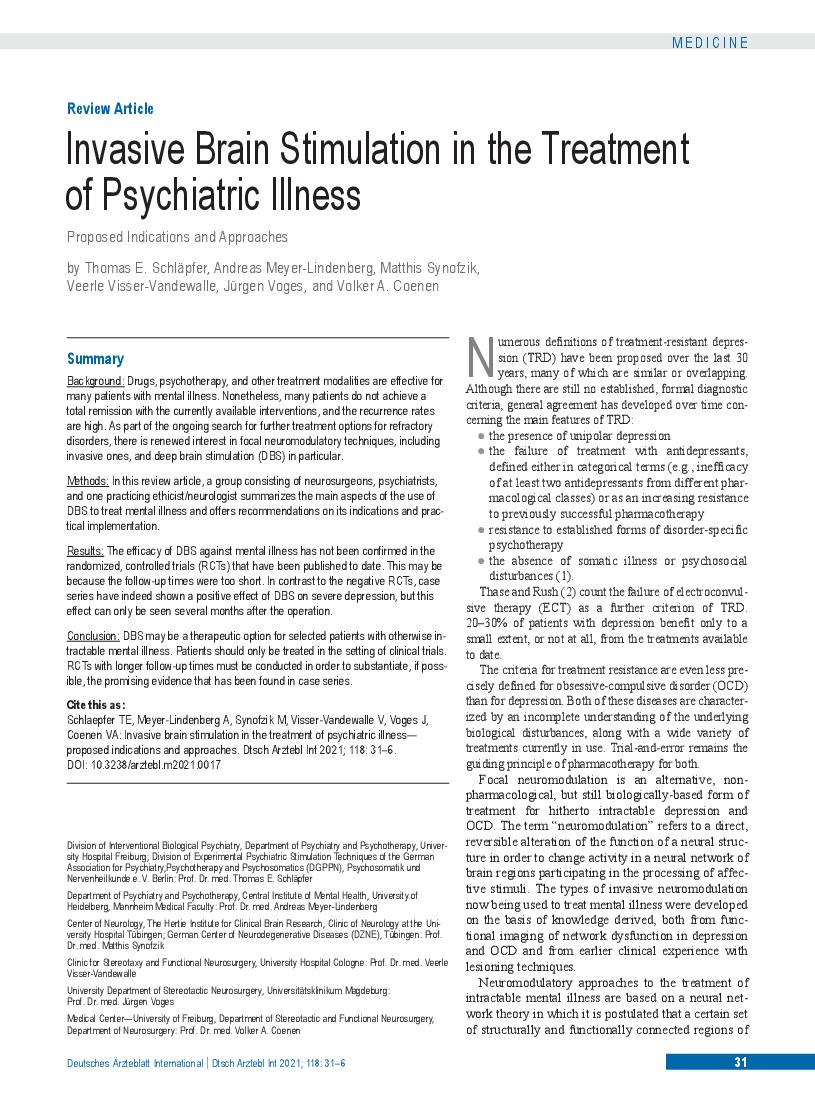