Background: It has not been conclusively established whether, or to what extent, the time to surgery affects mortality and the risk of complications after the surgical treatment of proximal femoral fractures.

Conclusion: A prolonged time to surgery is associated with an elevated general complication risk depending on the site of the fracture and the type of surgical procedure used.

The high risk of mortality and complications associated with proximal femoral fractures are of particular concern in the elderly. The incidence of these fractures in Germany is 130/100 000 (1). In those over 80 years of age, excess mortality within the first year due entirely to the fracture is 8% for females and 18% for males (2). These fractures result in considerable direct and indirect costs. Femoral fractures require urgent surgery (3).

For many years there have been enormous efforts to improve outcome. At the same time, there has been a shift from hemiarthroplasty to total joint replacement for the endoprosthetic management of femoral neck fractures (4).

Many studies confirm a direct link between mortality/complication rates and time to surgery (TTS), i.e., the time between admission to hospital and time of surgery (10, 11, 12, 13, 14, 15, 16). Other studies were unable to confirm this correlation (7, 17). In particular, it is not clear from exactly which TTS mortality and complication risk rises (18, 19) and to what extent this applies to endoprosthetic management (20).

International guidelines recommend timely surgery within the first day of, or up to 48 hours after, hospital admission (4, 21, 22, 23, 24). In compliance with German external hospital quality assurance, no objection can be found in performing fracture fixation within 24 hours on 85% of patients not receiving anticoagulant therapy or within 48 hours on those on anticoagulant therapy. Of those undergoing hip replacement, 85% should be operated on within 48 hours (25). Furthermore, delaying surgical care beyond 24 hours leads to a significant increase in costs within one year (13).

The present study explored the hypothesis that a longer TTS after proximal femoral fracture is associated with a higher risk of mortality and complications. The analysis was adjusted for risk factors (including age and comorbidities). Given the different indications for surgery, the subgroups fracture fixation for ITF (ITF-FF), fracture fixation for FNF (FNF-FF) and joint replacement for FNF (FNF-JR) were considered separately. Cases of joint replacement for ITF were excluded since they represented only a small group during the study period with significantly higher complexity and increased risk of complications (27).

Cases from the years 2015 to 2017 were identified from the pseudonymized in-patient billing data and core data of persons insured with the German local health care funds (Allgemeine Ortskrankenkassen, AOK) who had been treated with joint replacement for a primary diagnosis of “femoral neck fracture” or with fracture fixation for a primary diagnosis of “femoral neck fracture” or “intertrochanteric fracture” and who had no exclusion criteria (including being under the age of 20 years, secondary diagnosis of tumor, multiple injuries; eTable 1, eTable 2). These inclusion criteria are based on the definitions of hospital quality indicators for surgery for proximal femoral fractures in the QSR system (Qualitätssicherung mit Routinedaten, routine data quality assurance) of the Research Institute of the AOK (WIdO) (28). For the purposes of this assessment, items of the QSR exclusion criteria were extended to include transferred patients, myocardial infarction/stroke/transient ischemic attack (TIA) (ICD-10 I21, I22, I63, I64 or G45 as secondary diagnosis) and late surgery from the eighth day after hospital admission. For these cases, it is not possible to reliably record TTS, a diagnosis present on admission cannot be distinguished from a complication, or it must be assumed that there were reasons for delayed surgery which were not due to immediate patient management at the time of admission.

TTS was calculated as the difference in whole days between admission date and date of surgery and categorized for the purposes of regression analysis as “0 days” (reference category), “1 day”, “2 days”, “3 days” and “4 to 7 days”. Ninety-day mortality (from admission) and general complications during hospital stay (including follow-on transfers) or within 90 days of discharge were regarded as endpoints. General complications were defined based on the QSR system (29) and include transfusions and mechanical ventilation for more than 24 hours during the hospital stay, as well as serious diagnoses, such as stroke, myocardial infarction, pneumonia, sepsis, and pulmonary embolism (eTable 3).

The impact of TTS on 90-day mortality and 90-day general complications was examined using multiple GEE (generalized estimating equation) logistic regression models (with logit link function, exchangeable correlation structure and robust standard errors), taking into account age, sex, type of fracture fixation (in cases of fracture fixation), orthogeriatric co-management, antithrombotic medication during the previous year and comorbidities (separate factors, modified from Elixhauser et al. [30, 31]). Comorbid dementia was used as an additional risk factor (eTable 4). The analyses were conducted separately for the three subgroups ITF-FF, FNF-FF and FNF-JR. Cases without event, where AOK membership had ended within 90 days of discharge from hospital, were censored. Risk factors were chosen by first estimating six complete models and then removing those factors with a p-value ≥0.05. Because two models were estimated per subgroup, the alpha-error level according to the Bonferroni method was set at 0.025. All analyses were conducted using STATA version 16.0 (StataCorp, College Station, Texas).

The sensitivity analysis of cases with myocardial infarction, stroke or TIA during the hospital stay, for whom transfer to the hospital or delayed surgery had not been registered as a further reason for exclusion (ITF-FF: N = 1369, FNF-FF: n = 126, FNF-JR: N = 1 310), showed no significant difference in mortality amongst ITF-FF patients who had undergone delayed surgery when compared with operations on the day of admission, as opposed to a significantly increased mortality with operations on the second day after admission with regard to the basic evaluation. The results were largely unchanged for general complications. At the same time, the risk for general complications with operations performed on days 4 to 7 after admission was more increased for ITF-FF (OR 1.55 instead of 1.47). For FNF-FF, on the other hand, this was to a lesser degree, yet still significantly increased (OR 1.73 instead of 1.86; eTable 8).

In this observational study based on the routine data of 106 187 AOK patients with proximal femoral fracture from the years 2015 to 2017, the association was examined between time to surgery in days, on the one hand, and mortality and general complications, on the other, during the postoperative period of up to 90 days. To the best of our knowledge, we are presenting the first risk-adjusted study stratified according to fracture site (with the exception of subtrochanteric fractures) and type of operative procedure which demonstrates the different patterns in the subgroups with regard to the correlation between TTS and mortality rate and TTS and complication rate. At the same time, the analysis generally confirmed the correlation between delayed management of proximal femoral fractures and outcome. In no subgroup, however, was there any difference between operations performed on the day of admission and those carried out on the following day with regard to mortality and general complications.

There was no correlation between time to surgery and mortality. General complications increased only for procedures from the fourth day after admission. Nevertheless, joint-preserving fracture fixation should be performed as soon as possible in view of the fracture-related risk of compromised femoral head perfusion, given that the risk of avascular necrosis of the femoral head and non-union can increase with delayed fracture fixation (32, 33).

No evidence was apparent for a correlation between mortality and time to surgery. The general complication rate was increased for surgery from the third day after admission onward.

All patients 20 years of age and older with proximal femoral fracture (excluding subtrochanteric fractures) were included in this evaluation, whereas many other studies analyzed only patients 60 years of age and older or the very elderly at 80 years of age and older. In the majority of studies looking at the impact of timing of surgery, no stratification was undertaken according to fracture site (FNF vs. ITF) or surgical procedure (JR vs. FF) (for example 14, 18), so that differences in this respect were not apparent. In addition, different definitions of endpoints make a comparison with other studies difficult. Thus, Müller et al. (20) found no effect of time to surgery on mortality, revision rate and implant failure after total hip arthroplasty in patients with proximal femoral fracture. Although our results regarding mortality agree with their analysis, they do indicate a correlation between TTS and those general complications examined. Finally, most studies do not perform a risk adjustment for comorbidities (16), so that no distinction can be made between illness-related and purely delay-related, and therefore influenceable, causes of mortality and complication rates (see meta-analysis by Klestil et al. [15]). It cannot be ruled out that the negative effects found in other studies are due to comorbidities or anticoagulant therapy (34).

The main strength of this study lies in its large database, which reflects the nationwide care of patients with hip fractures in both large centers and smaller hospitals. Although there are certain structural differences between the various statutory health insurance funds with regard to age, sex and disease burden (35), any possible bias as a result can be countered by risk adjustment according to age, sex and comorbidity, as in the present analysis. The use of routine data also allows mapping of the course beyond the hospital stay.

One of the limitations of the present analysis is that time to surgery can only be extracted from the routine data in terms of days and not to the hour. That means, for example, that time to surgery always amounts to one day if the operation took place on the day after admission. In terms of hours, this constellation can correspond to an interval ranging on these days from a few hours to 48 hours of time to surgery, depending on the time of admission and time of surgery. Furthermore, diagnoses in the routine data are case-related, i.e., diagnoses that existed at the time of admission cannot be reliably distinguished from complications that occurred during the hospital stay. Complications, such as pressure sores which developed during the hospital stay or urinary tract infections, are therefore not taken into consideration. For the same reason, cases with myocardial infarction, stroke or TIA during the hospital stay were excluded but then considered in an additional sensitivity analysis. Subjective parameters, such as pain, cannot be mapped.

In terms of mortality and general complications, the present analysis shows clear differences regarding fracture site and surgical procedure. Prolonged time to surgery has the clearest negative impact for intertrochanteric fractures, while the results are less clear for femoral neck fractures, where mortality is independent of time to surgery.

Other aspects apart from mortality and general complications are also important but were not mapped here. Thus, the majority of intertrochanteric fractures are highly unstable and painful fractures, which also militates in favor of expediting management. On the other hand, by way of comparison, clinical experience shows that fracture pain in femoral neck fractures is better tolerated. However, due to compromised perfusion of the femoral head, even with fracture fixation of a femoral neck fracture, rapid surgery within a few hours is imperative, even though consideration of mortality and complications in isolation, as in the present analysis, would not suggest this. Factors such as pain until surgery, early complications such as pressure sores, or prolonged time to surgery play a role in the endoprosthetic management of a femoral neck fracture, rendering the demand for endoprosthetic treatment as soon as possible understandable, especially since no advantages for postponement can be derived from our data. With all fracture sites, it should also be kept in mind that it is not time to surgery from the point of admission, but the time from the fracture event until surgery which is likely to be decisive for the development of complications.

Overall, unless there are other reasons to the contrary, prompt treatment of all proximal femoral fractures is advisable. A structural adjustment of the reality of current care along the lines of legally binding specifications to fulfil clear process and structural requirements, even to the extent of priority referral to suitable centers, is the logical consequence.

eTable 8
Sensitivity analysis
Enlarge All figures
Time to Surgery and Outcome in the Treatment of Proximal... 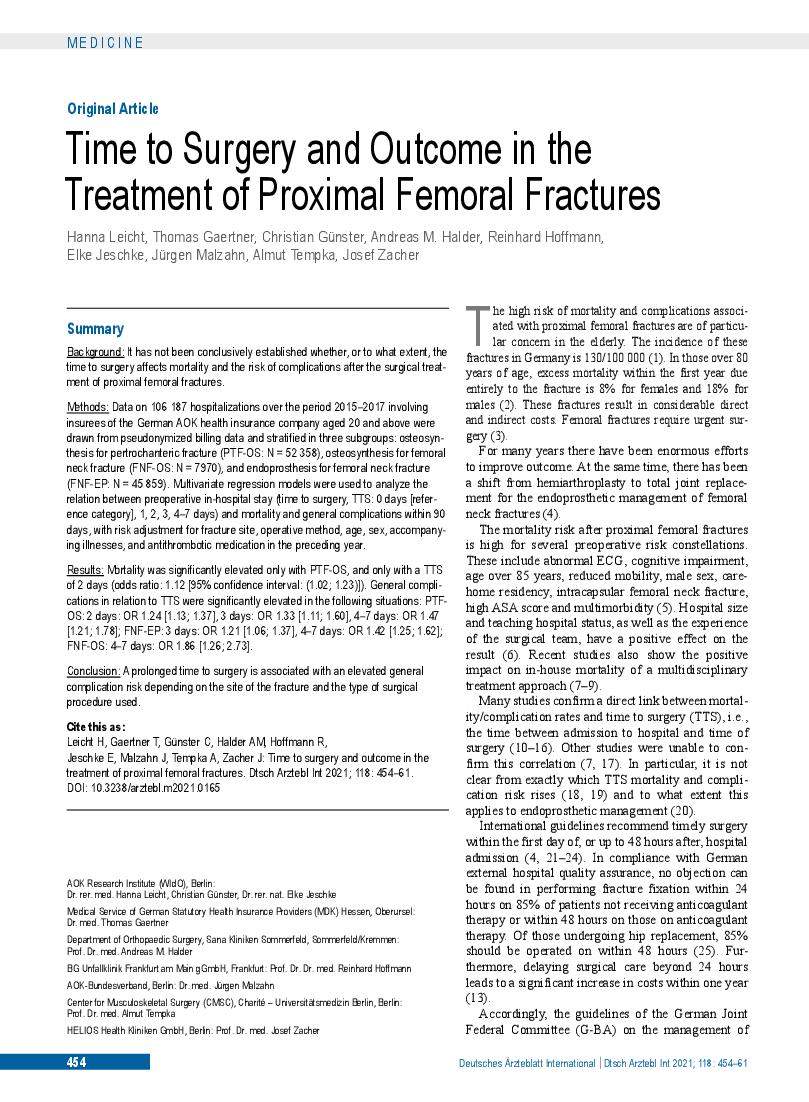