Surgery for Hip Fractures Under NOAC Within 24 Hours

According to the guidelines of the German Federal Joint Committee (1), which came into force on 01.01.2021, treatment of patients with proximal femoral fractures is required within 24 hours to reduce complication rate and mortality. This time interval is often not adhered to when patients are on anticoagulation with new oral anticoagulants (NOACs) (2). NOACs possibly increase the complication risk. There are no, or only expensive, antidotes available. Recommendations to discontinue NOACs 48–72 hours before high bleeding risk procedures (3) are at odds with the concept of treatment within 24 hours.

Small patient populations and differences in time to surgery considerably limit the conclusions that can be drawn from published results. Therefore, based on a comparatively high case number, we conducted a single-center, retrospective study comparing the complication rate and mortality of patients with a proximal femoral fracture and anticoagulation with NOAC with regard to surgical management within 24 hours and treatment after 24 hours.

Out of 1596 patients with proximal femoral fractures operated between 01.01.2013 and 31.05.2019, 109 had been on anticoagulation with NOACs. Patients over 65 years-of-age who had sustained a femoral neck, intertrochanteric or subtrochanteric fracture were included in the study. Treatment included fracture fixation (dynamic hip screw or proximal femoral nail) and hip replacement. Perioperative management of anticoagulation was interdisciplinary, in accordance with current literature recommendations (3). Reversal of anticoagulation was only planned in the event of increased intraoperative bleeding.

The cohort was divided into two groups (preoperative interval ≤24 hrs or > 24 hrs) (Table 1). Follow-up time was one year. For purposes of data collection, patient records were analyzed, and informed consent obtained on contacting patients or relatives. According to the Regensburg Ethics Committee, no approval was required.

The Mann–Whitney U test was used for comparison of non-normal distribution parameters. Nominal data were assessed using the Fisher’s exact test. Survival analysis was performed using the Kaplan-Meier method or the log rank test (Table 2).

Table 2
Target variables for the control groups
Enlarge All figures

The descriptive characteristics were comparable between the cohorts (Table 1). The target parameters blood loss, transfused red cell concentrates, surgical and general complications, one-year mortality, and survival time were also comparable between both groups. Thirty-day mortality was increased and stay in hospital was prolonged when treatment was delayed (Table 2). There were no severe intraoperative complications. Two patients received fresh frozen plasma and prothrombin complex concentrate, respectively. Specific antidotes were not needed. The one-year follow-up rate was 100%.

The present study is the first to analyze the one-year outcome in relation to the preoperative interval of patients on anticoagulation exclusively with NOACs, with 24 hours as the cut-off limit.

Similar cohort studies with smaller patient populations present comparable results. The disadvantage of the present study is its level of evidence. Its statistical power is too limited to make any far-reaching statements. Other predictor variables are possible; complications with a frequency of up to 7% cannot be ruled out. However, the patient population is consistent with registry-based studies on proximal femoral fractures in terms of descriptive elements and target parameters (2, 4, 5). The Danish registry reveals a slightly increased risk of transfusion with the same 30-day mortality in a comparison of patients with and those without NOACs who underwent timely management. Complication rate and one-year mortality were not recorded (4).

Various studies and the present results show that the impact of early management on outcome should be considered in a differentiated way. A Canadian registry-based study confirms a reduction of complications and 30-day and one-year mortality for the total population (anticoagulated and non-anticoagulated) (5). The present study demonstrates a reduction of 30-day, but not one-year, mortality for patients anticoagulated exclusively with NOACs. Given that patients with pre-existing anticoagulation tend to suffer from more comorbidities (4), higher mortality is to be expected in the long term. It is possible that any mortality benefit from timely care for this group of patients is lost after one year. It therefore remains unclear which particular patient group will ultimately benefit from timely management—presumably, the healthier patients (2).

Our data suggest that delay of surgery due to treatment with NOACs is not justified and the risk of bleeding is overestimated. Recommendations about the timing of NOAC cessation (3) are based on the opinions of experts and apply to elective surgery. The greatest blood loss occurs before surgery and is due to the unreduced fracture. Intraoperative blood loss is low with predominantly minimally invasive procedures and not increased to any clinical relevance. Furthermore, fracture reduction and closure of the medullary canal achieves hemostasis.

Given the absence of guidelines, in-house recommendations for action should be provided for a perioperative approach to NOACs. We consider it possible to administer NOACs without any significant interruption and, if necessary, intermittently at prophylactic doses. If administration of NOACs needs to be interrupted after surgery for a maximum of 48–72 hours, bridging with heparin is not recommended because this leads to increased bleeding complications without reducing the risk of thromboembolism (3). NOAC accumulation should be borne in mind in the presence of severely impaired renal function. The prophylactic administration of antidotes or coagulation factors does not appear to be beneficial. The antidotes idarucizumab and andexanet alfa cause increased rates of thromboembolism, for which reason they are only approved for life-threatening hemorrhage (3). The demand for timely care excludes the option of spinal anesthesia, in line with the relevant guidelines of the German Society for Anesthesiology and Intensive Care Medicine. However, it could be of advantage for high-risk cardiopulmonary patients as opposed to general endotracheal anesthesia performed exclusively here. In conclusion, it remains to be said that randomized trials and higher case numbers would be desirable. 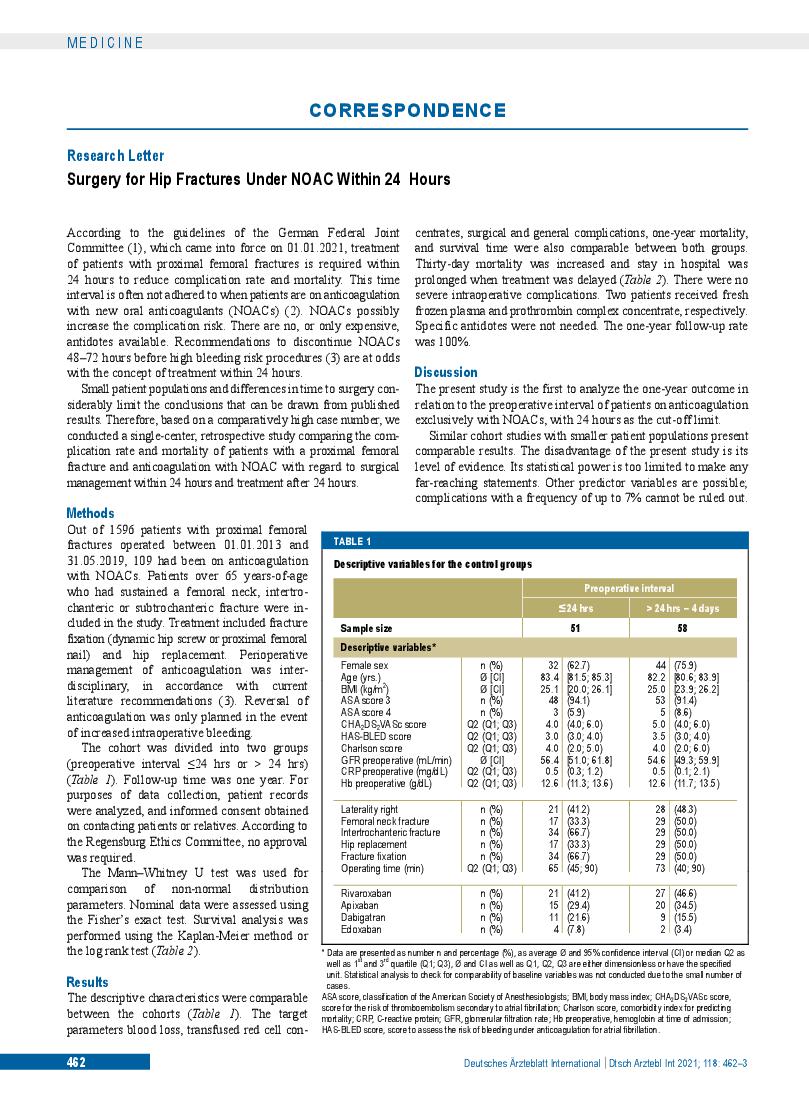