In Germany, more than 80% of cases of hepatocellular carcinoma (HCC) occur in patients with cirrhosis of the liver (1). Early detection is crucial for the overall prognosis in this setting (2). The German Clinical Practice (S3) Guideline—published in 2013 by the German Society for Gastroenterology, Digestive and Metabolic Diseases (DGVS)—included the recommendation for sonography screening of at-risk patients every six months, so as to improve the early detection rate (3). The current study compares the early detection rate and its effect on the overall prognosis before and after publication of the guideline.

At the University Medical Center Hamburg-Eppendorf (UKE), 987 patients with HCC were treated in the time period from 2008 to 2017. They were recorded systematically in a database (ethics approval PV-3578) and evaluated retrospectively. All patients were followed up until 2019. In order to investigate the temporal association with the coming into effect of the S3 guideline for the type of initial diagnosis (obvious symptoms or by means of structured native-sonography screening every six months) as regards the Barcelona Clinic Liver Cancer (BCLC) classification, the time periods 2008–2012 and 2013–2017 were compared. Furthermore, we used Kaplan-Meier estimates and Fisher’s exact test to determine median overall survival for both cohorts. Patients who had had a liver transplant were excluded from the evaluation because of the changing allocation criteria. Furthermore, we excluded for the purposes of quality assurance patients whose data regarding the initial diagnosis were incomplete.

The comparison of the two time periods showed that for 2008–2012 (n=341) a diagnosis was more commonly made in the setting of screening/monitoring programs than in 2013–17 (n=252) (47.2% vs 38.1%; p = 0.029; Table). This was accompanied by an increase in early-stage tumors (BCLC stage A: 35.1% vs 29.4%, stage B: 49.9% vs 40.6%, p=0.01). Therapy with curative intent by means of resection or ablation was possible in higher proportions of patients (40.1% vs 36.4%) and the overall prognosis improved in all patients, with an increase in median survival from 11 months to 16 months (p=0.012; Figure). To consolidate the results we compared the prognosis while considering the different treatment modalities in terms of curative or palliative procedures (2008–12 vs 2013–17: curative 38 months [n=91] vs “not achieved” [n=67 months] after 50 months p=0.13; hazard ratio [HR] 0.61 [95% confidence interval 0.32; 1.2], palliative 9 months [n=160] versus 12 months [n=100], p=0.31; HR 085 [0.63; 1.2]) and the established treatment approaches (resection/ablation, transarterial chemoembolization, and systemic therapy, all p>0.05), without detecting any differences in overall survival between the respective groups up to and from 2013. The comparison of the median overall survival of patients in the monitoring program or with symptoms leading to a diagnosis in the periods 2008–12 vs 2013–17 showed no significant differences in the respective analysis. An improvement in the overall prognosis by means of optimizing the therapeutic modalities is therefore not likely. Similarly, no differences were seen between the two groups for the liver function parameters, Child-Pugh stages, etiologies, or ECOG at the time of the diagnosis, which allows for a comparison of the results. On the basis of the available data it was not possible to study the effect of antiviral treatment in hepatitis C.

Our data imply that a diagnosis at an early stage is associated with an improved overall prognosis in HCC. Although the rate of diagnoses in the setting of screening/monitoring programs at our center continued to be below 50% even after the S3 Guideline 2013 had been introduced (3), the increase in diagnoses by means of screening/monitoring programs is associated with a rise (from 70% to 82.0%) in early detections (BCLC stages A and B) and with an improvement in the overall survival prognosis from 11 months to 16 months. A lead time bias alone cannot explain the improved overall prognosis, especially since the increase in diagnoses of BCLC stage A from 29.4% to 35.1%, and cumulatively of stages A and B from 70.0% to 82.0% is consecutively associated with an increased rate in curative treatment modalities. It was not possible on the basis of the current dataset to quantify the lead time bias.

Dr Werner received consultancy fees, reimbursement of delegate fees for conferences, as well as for travel and accommodation expenses, and financial funding for conducting commissioned clinical studies from Bayer.

Table
Time periods 2008–2012 and 2013–2017 before and after the introduction of the DGVS Clinical Practice Guideline for HCC
Enlarge All figures
Early Detection of Hepatocellular Carcinoma Since the... 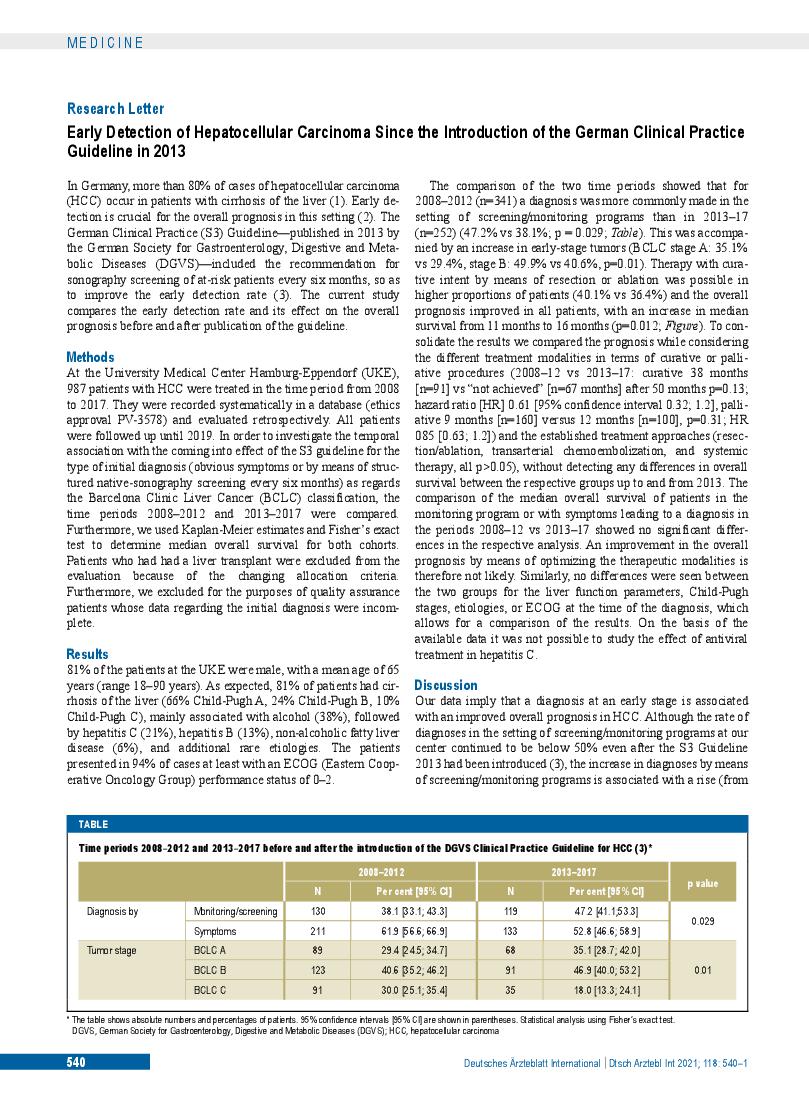