Refugees account for approximately two percent of patients in the mental health system. Even though the health care and integration of refugees are relevant from the perspective of society as a whole (1), data from surveys required to increase our understanding of the situation and improve treatment conditions are lacking (1).

Refugee children and adolescents are especially vulnerable with regard to mental disorders, with high prevalence rates of post-traumatic stress disorder (PTSD) as well as depressive and anxiety disorders (2). Particular high rates of mental illness are observed among unaccompanied minor refugees, also in comparison to their accompanied counterparts (2).

Uncertainty about their residence prospects constitutes not only an emotional burden for these refugees, but also makes treatment more challenging. (3). The complexity of the treatment situation and a concern about additional workload can raise the barrier for refugees to accessing mental health services (3).

Patients can request a medical certificate from their treatment provider to legally prove their mental illness and obtain right of residence. However, a survey of psychiatric hospitals in Germany (1) found that the primary goal of adult refugees was getting treatment, not obtaining proof of their illness. On minor refugees, however, no such surveys have been conducted as yet.

In this study, we collected data of unaccompanied minor refugees receiving child and adolescent psychiatric treatment. Our aim was to, for first time, gather information about this group’s demographic characteristics, range of diagnoses and need for specialist medical certificates.

The following information was obtained from the digital patient records: age at the time of initial consultation, sex, country of origin, diagnoses. In addition, it was recorded whether a specialist medical certificate was issued for legal proceedings to obtain right of residence. All data were processed in an anonymized form.

During the period covered by the study, a total of 402 unaccompanied minor refugees presented at the outpatient clinic. Each of them was diagnosed with at least one mental disorder. The demographic characteristics and diagnoses are presented in the Table. Mean age at the time of initial presentation was 16.6 years (standard deviation [SD], 1.5). Of the unaccompanied minor refugees, 90% were male. The patients came from 30 different countries. The main countries of origin were Afghanistan, Guinea, Syria, and Somalia. The most common diagnoses were PTSD (70%), adaptation disorder (31%) and depressive disorder (24%); 46% of the patients had at least one comorbid mental disorder.

The data analysis confirmed the results of international studies, reporting PTSD and depressive disorder as the most common mental disorders in unaccompanied minor refugees (2). In comparison to adult patients with a refugee background in psychiatric hospitals in Germany, of whom about 42% suffer from PTSD (1), the proportion of unaccompanied minor refugees with PTSD was significantly higher in the child and adolescent psychiatric outpatient clinic.

Less than half of the unaccompanied minor refugees, presenting at the child and adolescent psychiatric outpatient clinic, requested a specialist medical certificate. This result suggests that the issuance of a certificate is not a primary concern for all patients. In comparison to adult patients with refugee background in psychiatric hospitals, of whom approximately 43% request a medical certificate (1), the proportion of patients in child and adolescent psychiatry, requesting a medical certificate, is significantly lower. One reason for this is certainly that unaccompanied minor refugees cannot usually be deported to their country of origin due to the provisions in section 58 (1a) of the German Residence Act (AufenthG, Aufenthaltsgesetz). Besides the asylum procedure, these patients have other options for securing residence, such as a residence permit for well-integrated adolescents (Residence Act, section 25a).

In Germany, a survey found that 75% of male adolescent refugees in a youth welfare institution suffered from at least one mental disorder, most frequently from PTSD (4). The large number of patients with PTSD in the health care-utilizing population is a major challenge for the German health care system. Even before the arrival of large numbers of refugees, there was a shortage of treatment slots in many parts of Germany, especially for children and adolescents with post-traumatic stress disorder (5).

A concern about additional workload related to issuing medical certificates as well as sporadic cases of instrumentalization of mental disorder may reduce the willingness of doctors and psychotherapists to treat patients with a refugee background (3). However, the results of this study show that unaccompanied refugee minors do not generally required specialist medical certificates. In addition, our results do not support the assumption that trauma-induced disorders are instrumentalized in residence-related legal proceedings on a regular basis.

Conflict of interest statement
Dr. Walg received an author fee from CIP-Medien for a publication related to the topic.

Table
Demographic characteristics and diagnoses of the unaccompanied minor refugees (N = 402)
Enlarge All figures
Reasons for Outpatient Psychiatric Consultations of... 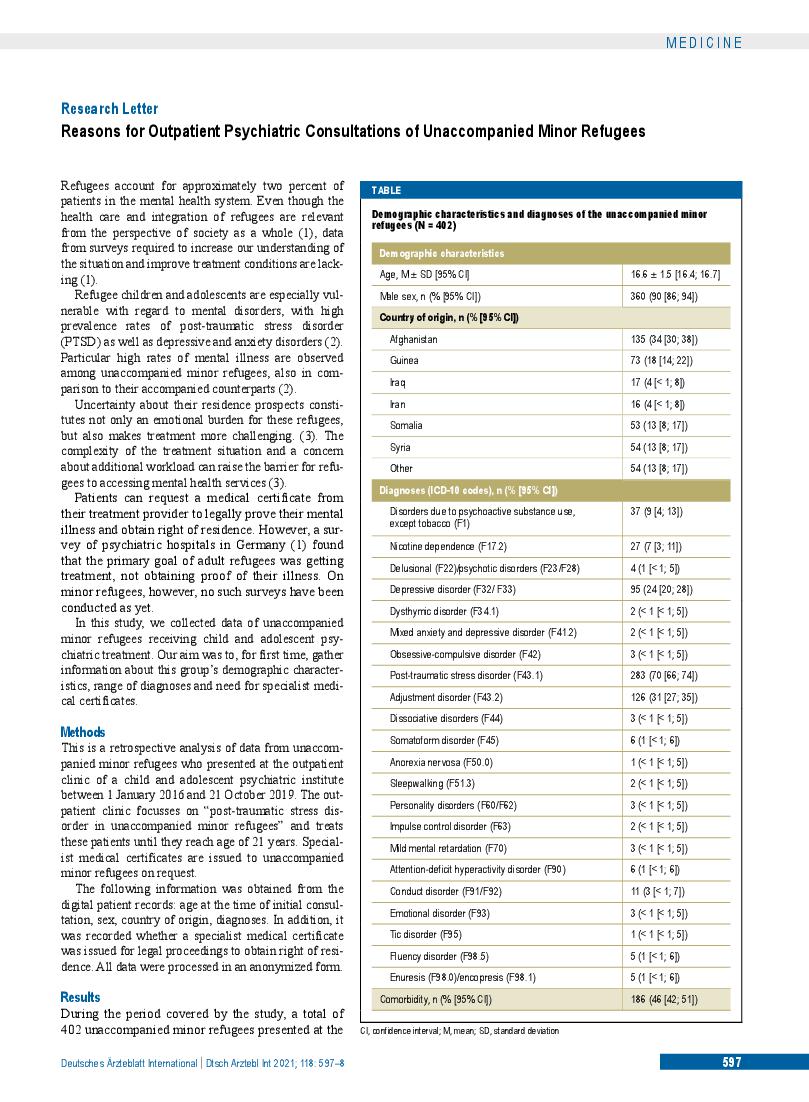