Nephrotic syndrome after vaccination against influenza, measles, hepatitis B, or pneumococci is described as a very rare event (1, 2). There are currently no indications for an increased risk of kidney injury after COVID-19 vaccination in the safety report of the Paul Ehrlich Institute from 19 August 2021. A large-scale study on the BNT162b2 vaccine (Comirnaty, BioNTech/Pfizer) shows that COVID-19 vaccination has a clear overall positive benefit–risk ratio with respect to kidney injury (3). Furthermore, people vaccinated with BNT162b2 did not present increased kidney injury as compared to unvaccinated people (3). However, there are increasing reports in the international literature of persons with nephrotic syndrome a few days after COVID-19 vaccination (1, 2, 4). Here, three new cases from Germany are described for the first time.

A 78-year-old retired man noticed weight gain and edema four days after the first vaccination with Comirnaty. Based on a finding of normal S-creatinine levels, inpatient therapy was carried out for suspected cardiac decompensation. 14 days after a homologous second vaccination, the patient was again admitted for inpatient treatment for weight gain, leg edema, and pleural effusions. Based on a clinical picture of nephrotic syndrome with protein deficiency, edema and hyperlipoproteinemia, a kidney biopsy was carried out, which led to the diagnosis of minimal change disease (MCD)/glomerulopathy (Figure 1). Findings of tests for antineutrophil cytoplasmic antibodies (ANCA) and antiglomerular basement membrane antibodies (AGBM-Ab) were negative. Clinical improvement was observed following prednisolone, diuretics, and anticoagulation administration; after three weeks, the patient showed reduced proteinuria and a 14-kg weight loss, with partial remission. Kidney function was not impaired. The patient lives independently at home and to date has not contracted COVID-19. 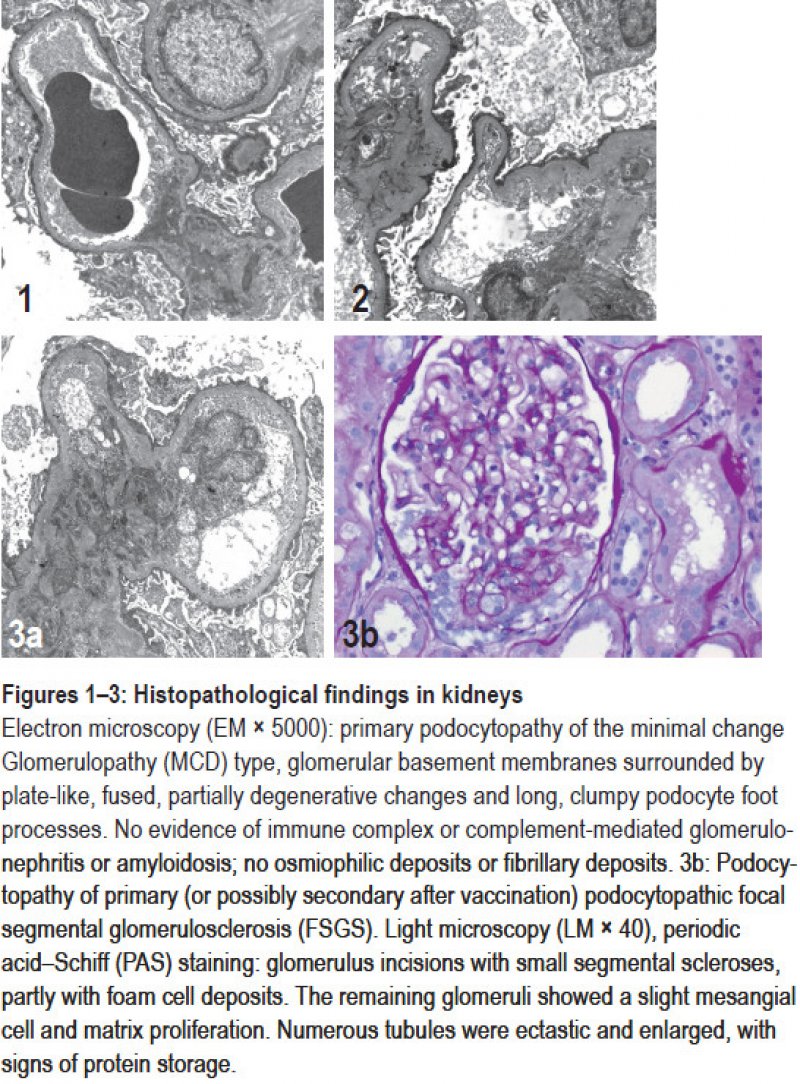 Nephrotic syndrome was diagnosed based on proteinuria with hypoalbuminemia, hypercholesterolemia, significantly reduced immunoglobulin G (IgG), and antithrombin III levels with normal S-creatinine; kidney biopsy confirmed podocytopathy (MCD form) (Figure 2). This was followed by a course of infection complications and proteinuria at a maximum of 22 g/g Cr and a weight gain of 15 kg. A calculated administration of antibiotics, immunoglobulin, and prednisolone was initiated. Rituximab induction was administered and repeated after 14 days, to avoid possible side effects of long-term steroid therapy. Anticoagulation and diuretics therapy led to reduced proteinuria, and the prednisolone dose was halved on day 24; the patient was discharged on day 26 with a weight loss of 22 kg. On day 52, the patient was in complete remission with remaining mild hyperlipoproteinemia. To date, she has not contracted COVID-19.

A 20-year-old woman had generalized edema five days after the first vaccination with Comirnaty. Forty days later, the patient was admitted to the hospital due to increasing edema with nephrotic syndrome, with pronounced proteinuria, normal S-creatinine, hyperlipidemia, and eumorphic hematuria as well as vitamin D deficiency. She did not exhibit leukocyturia, had normal levels of complement factors C3 and C4, and tested negative for anti-nuclear antibodies (ANA) and ANCA. As a vegan, she supplemented with iron and vitamin B12. Two months before the vaccination, she had normal-range levels of S-albumin and cholesterol. Renal biopsy revealed podocytopathy with podocytopathic focal segmental glomerulosclerosis (FSGS) (Figure 3).

Prednisolone therapy, diuretic and lipid-lowering therapy, and vitamin D substitution were started; after ten days, the patient showed a weight loss of 5 kg with reduced proteinuria. 68 days after vaccination, the patient was in partial remission with persisting proteinuria and hyperlipoproteinemia. To date, the patient has not contracted COVID-19.

Table
Summary of cases, with laboratory values during the course
Enlarge All figures

Two other patients with steroid-dependent MCD who relapsed after a first vaccination with Vaxzevria were given a heterologous second vaccination (vaccine not mentioned) and treated with prednisolone; they showed no further relapse (4).

Immediately or a few days after the COVID-19 vaccination, foamy urine and edema can occur with renal protein loss. In these cases, patients should be screened for proteinuria and, if the finding is positive, a nephrological work-up should be carried out. Therapy with prednisolone can prevent a complicated course and lead to remission.

Translated from the original German by Dr. Veronica A. Raker.

Table
Summary of cases, with laboratory values during the course
Enlarge All figures
Nephrotic Syndrome After Vaccination Against COVID-19: Three... 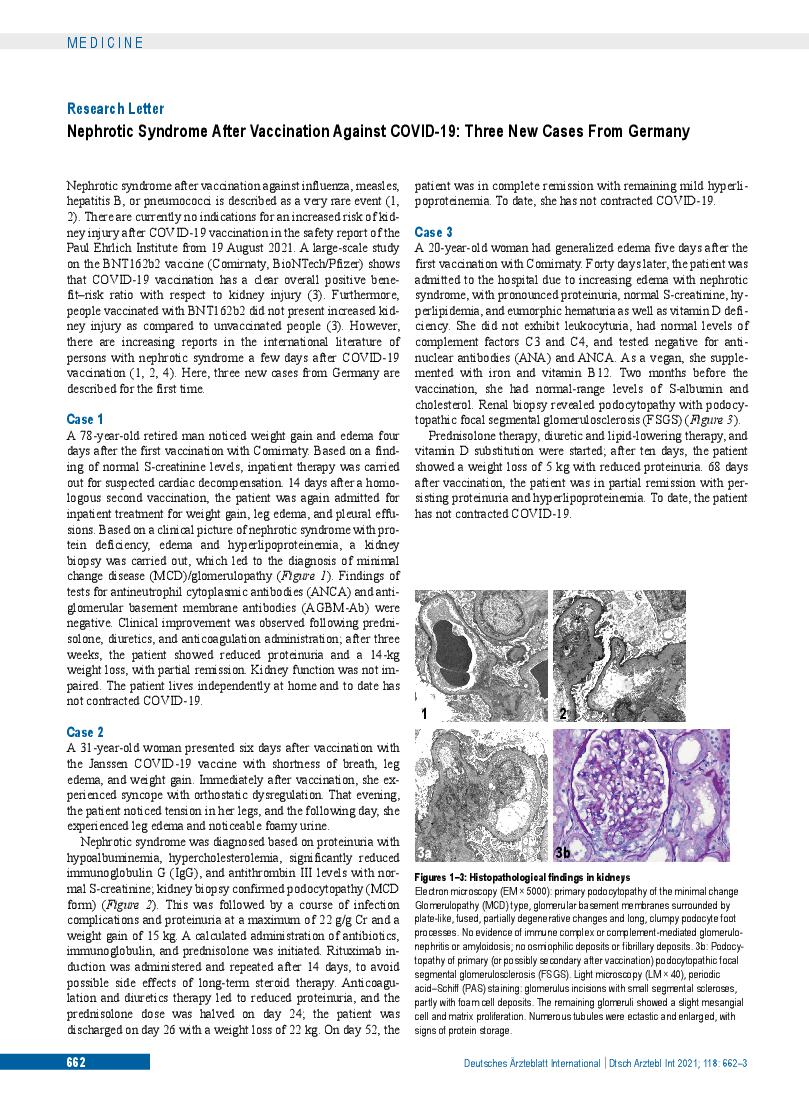