In Germany, the anti-HCV prevalence in the general population is between 0.2 and 1.9% (1). Infection with the hepatitis C virus (HCV) can result in chronic liver disease, the complications of which are liver cirrhosis and hepatocellular carcinoma (HCC). Thus, for many years, HCV infection was one of the most common indications for liver transplantation secondary to decompensated cirrhosis or HCC. Over the past ten years, between 800 and 1200 liver transplantations have been performed in Germany each year. With the introduction of highly effective and safe direct antiviral agents (DAAs) against HCV in 2014, the question arose as to what extent the need for HCV-related liver transplantations has decreased since then. In an initial analysis involving eleven German transplant centers, we already found evidence in 2016 that the proportion of patients with HCV-related liver transplantation was in decline after the introduction of DAA in Germany (2). In this paper we present a follow-up of this study.

Figure
Participating centers during the period 2010–2020
Enlarge All figures

Proportion of transplanted patients with hepatitis C and hepatocellular carcinoma

The present evaluation from eleven German transplant centers impressively demonstrates the impact of the introduction of highly effective and safe hepatitis C treatment using DAA on the German transplant scene. It was shown that there is a strong association between the need for HCV-related liver transplantation and the introduction of direct antiviral agents. This results in patients with other liver diseases having an increased chance of receiving a transplant. In 2020, almost 50 more organs were available for other indications in the participating centers as compared with 2013.

The present data are consistent with observations from other countries (3). Currently, it must be noted that, with a few exceptions, a patient with HCV ultimately only needs a transplant if they develop HCC. Against this background, it is important to note that after recovery from the HCV infection, the risk of developing HCC is reduced, but not completely eliminated (4).

In the present work, it cannot be ruled out that slight biases have arisen over the years due to patient transfers between centers whose numbers were considered for the analysis and centers that did not participate in the survey.

We recommend that all patients with HCV, even if they have hepatocellular carcinoma where curative therapy is available, receive antiviral therapy or that therapy is initiated following liver transplantation. However, an indication for therapy should be made with caution if a lab MELD score >20 is present (5).

Prof. Herzer received fees for consultancy work from Novartis and Chiesi. She received congress fees and travel expense reimbursement from Gilead. She has been remunerated for lectures by Novartis, Astellas, Chiesi and Biotest.

University Lecturer Dr. Eurich received congress fees and travel expense reimbursement from Gilead and Janssen. He was reimbursed for presentations by BMS.

Prof. Strassburg was reimbursed for presentations by BMS, Janssen and Gilead.

Prof. Zeuzem received consultancy fees from Abbvie, Gilead, Intercept, Janssen and SoBi. He was reimbursed for presentations by Abbvie, MSD and SoBi. He received support from various companies for more than 50 studies in the fields of endocrinology, gastroenterology and hepatology.

Dr. Serfert, Prof. Trautwein and Dr. Lang confirm that there are no conflicts of interest. 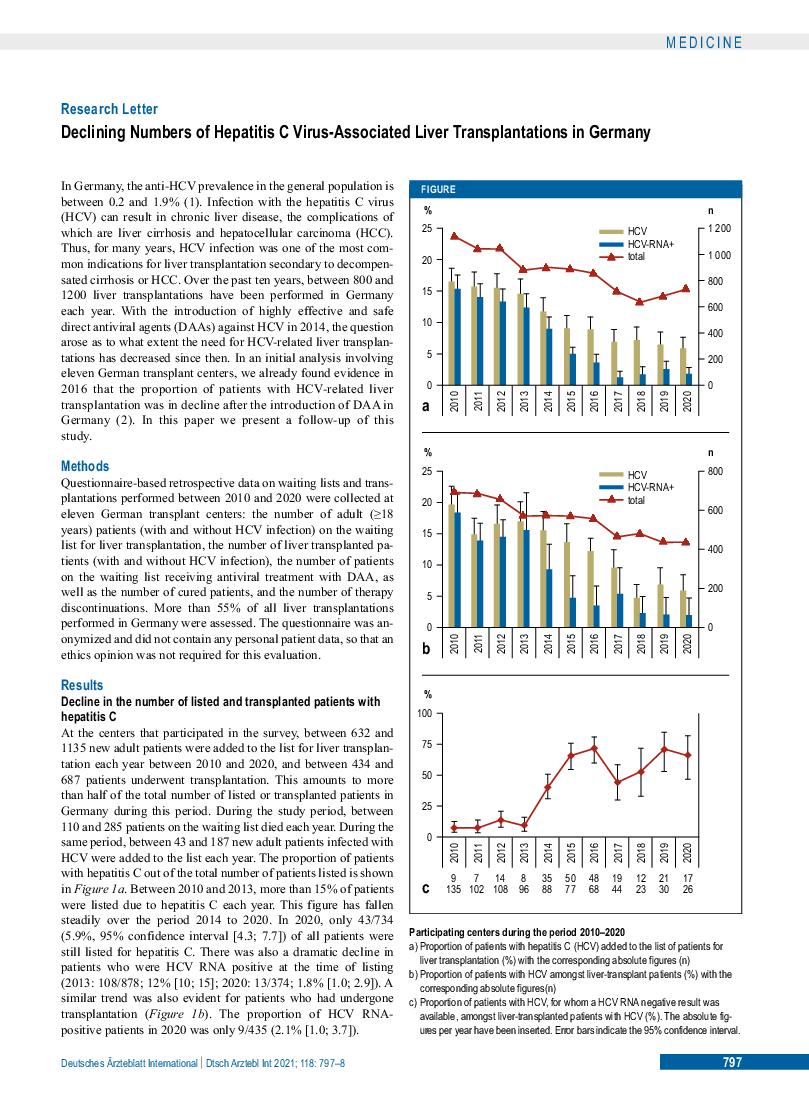