Findings of a Nationwide Sero-Epidemiological Study in Germany

Working in the healthcare sector often necessitates being physically close to other people and direct contact with infectious patients. This can contribute to a greater risk of becoming infected with SARS-CoV-2 (1). Studies of the risk of infection in healthcare workers in Germany have thus far been based on studies in individual healthcare institutions (2) or analyses of sick notes/medical certificates (3). The study “Corona-Monitoring bundesweit ([Corona monitoring nationwide] RKI-SOEP-Study)”(4) was the first to provide nationwide population based sero-epidemiological data on the risk of infection. On the basis of these data we analyze whether and to what extent the risk of infection with SARS-CoV-2 was higher in healthcare workers than in workers in other occupations during the first two waves of infection in spring 2020 and winter 2020/21.

The RKI-SOEP Study collected biological specimens and survey data in a nationwide population sample of the “socioeconomic panel” (SOEP) between October 2020 and February 2021. Participants received materials to enable them to collect independently a dry blood spot from capillary blood of a finger and a mouth-throat swab, as well as a questionnaire. The returned specimens were analyzed by using ELISA antibody assays by Euroimmun for SARS-CoV-2-IgG antibodies and by using polymerase chain reaction (PCR) for SARS-CoV-2 DNA. A total of 15  122 people participated in the study (response rate: 48%), of which the economically active between 18 and 64 years of age (n=7879) were included in our analysis. Further details regarding study design and methods are in the study protocol (4). Participants were defined as infected cases if they had either confirmed positive IgG antibodies (SARS-CoV-2-S1 IgG ELISA; cut-off adapted for dry blood spot specimens: ratio ≥=0.94) or a positive PCR test result or they reported a positive PCR throat swab prior to study participation in the questionnaire.

The prevalence of SARS-CoV-2 infections was estimated by using weighting factors, which corrected for possible biases resulting from the study design and panel drop-outs. Simultaneously the sample was adjusted to the German population in private households regarding age, sex, federal state (Land), size of municipality, size of household, and home ownership according to official statistics. To estimate standard errors we used Stata-Survey-Procedures (version 17.0) for complex samples while taking into consideration weighting and clusters of persons living in the same household. We used logistic regression models to estimate the odds ratio (OR) for infection with SARS-CoV-2 by professional group.

The Table shows the composition of the sample. The median date for participation was 11 November 2020. The mean age of participants was 44 years. Of the 7879 persons included, 915 were healthcare workers, of whom 26 met the case definition (unweighted frequencies). The Figure shows the weighted prevalence estimate and adjusted OR for infection with SARS-CoV-2. Overall, the prevalence in healthcare workers was 4.6% (95% confidence interval: [2.7; 8.0) and in other workers, 1.8% [1.4; 2.4]. After adjustment, healthcare workers were at 2.1-fold higher risk for infection with SARS-CoV-2 (OR: 2.1 [1.1; 4.0; p=0.034) compared with workers in other occupations.

Our results from the first nationwide population based sero-epidemiological study in German show that working in the healthcare sector—while correcting for other potential risk factors and third variables—is associated with roughly double the risk of SARS-CoV-2 infection.

A strength of this study lies in the fact that infection status reflects not only known infections, but by combining self reported infections with serology and PCR tests also reflects hitherto unknown infections. Different testing frequencies before participation in the study were statistically considered in the regression analyses. This counteracted potential biases resulting from more frequent testing of healthcare workers, which could have arisen as a result of including self reports of known infections in the case definition. It needs to be borne in mind that testing frequencies were self reported and that measuring errors as a result of recall bias cannot be ruled out. The risk of infection in healthcare workers could have been underestimated if healthcare workers were infected earlier and antibody levels fell below the test detection threshold in more cases in this group because of the waning concentration of antibodies. If only the laboratory tests conducted in the study setting were considered, the results were confirmed but did not quite reach significance.

Because of the sample size it was not possible to differentiate which specific healthcare workers were at particularly increased risk. Other studies showed that the variation within individual professional groups and between different healthcare institutions can be large and that professional groups with a greater density of contacts were particularly affected (5). The RKI-SOEP Study was carried out before vaccines became available and the delta variant became the dominant strain, which means that the results cannot simply be generalized to the current situation.

In sum, being a healthcare worker during the initial two pandemic waves in Germany was associated with a notably increased risk for infection with SARS-CoV-2. Further improving protection from infection in healthcare institutions—especially for pandemic waves pre-dating the availability of vaccines—seems required und should therefore be considered in future pandemic planning.

Conflict of interest statement
J. Hoebel, S. Zinn, and C Hövener received research funding from the German Research Foundation for research projects in the setting of the COVID-19 pandemic. The remaining authors declare that no conflict of interest exists.

The study was approved by the ethics committee of the Berlin Medical Association and declared inoffensive/credible in terms of professional ethics. Participation in the study was voluntary. All participants gave informed consent in writing.

The study “Corona Monitoring bundesweit (RKI-SOEP-Study)” was funded by the Federal Ministry of Health.

Table
Characteristics of the study population of 18-64 year olds in gainful employment in Germany
Enlarge All figures
The Risk of Infection with SARS-CoV-2 Among Healthcare... 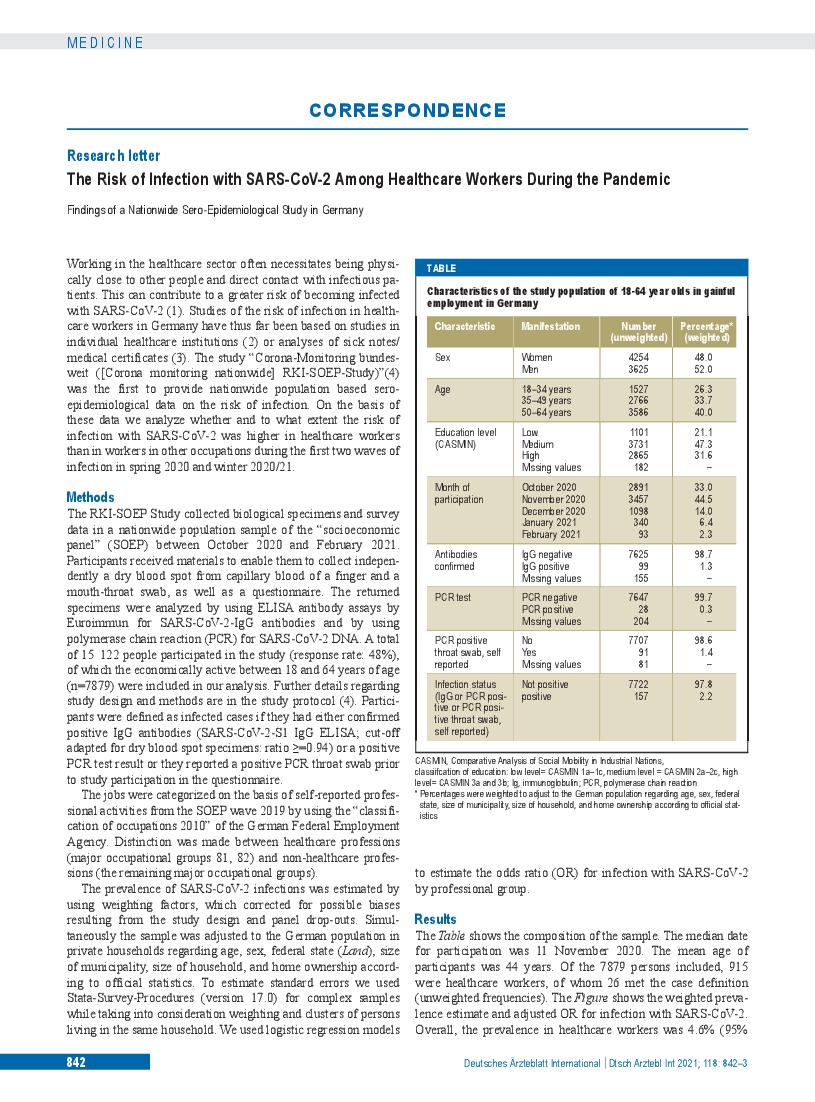