A Case Series from Intensive Care in a Single Center

Glycyrrhizin, the main component of the licorice root, is widely used in the food industry as well as in complementary medicine treatments in the form of licorice (1). However, excessive licorice consumption can lead to complications requiring intensive medicine, as shown by a retrospective analysis of patient data from our center over an observation period of 24 months.

Based on insight from the case series, a selective literature search was conducted in the Embase and Medline databases using PubMed, and the Cochrane Library of Systematic Reviews/Register of Controlled Trials (2). Relevant literature published up to 16 May 2021 were included in the search.

From 2018 to 2020, a total of six patients were treated in intensive care due to licorice toxicity (Table). All showed the symptom triad of arterial hypertension, hypokalemia, and metabolic alkalosis. Subjective symptoms were muscle weakness, muscle pain, paresis (including tetraparesis), and palpitations. The main reasons for the intensive medical monitoring were the extent of the hypokalemia, abnormal blood pressure, and cardiac arrhythmias. One patient required resuscitation due to tachycardia of the Torsade de Pointes type. Laboratory evaluation gave the following results: potassium (mmol/L): 1.3 to 2.1 (normal range [NR] 3.5 to 5); pH: 7.48 to 7.6 (NR 7.35 to 7.45); bicarbonate (mmol/L): 30.8 to 51.9 (NR 21 to 26); base excess (mmol/L): 8.3 to 26.6 (NR −2 to +3.0); creatine kinase (U/L): 197 to 23 885 (NR < 173); myoglobin (ng/mL): 2002 to 11 206 (not determined for n = 3 patients; NR 23 to 72). Renin and aldosterone levels were predominantly normal or reduced. The symptoms of all patients improved with potassium replacement therapy and short-term administration of mineralocorticoid receptor antagonists. Admission to the intensive care unit and diagnosis were preceded by consultations with primary care physician, and a preliminary neurological/cardiological diagnosis based on clinical symptoms was made in the hospital emergency room. The licorice consumption of the patients was only mentioned or asked about during the course of their stay.

Licorice toxicity is characterized by the symptom triad of hypertension, hypokalemia, and metabolic alkalosis—so-called pseudohyperaldosteronism. Marked rhabdomyolysis/paresis, cardiac complications, acute hypertension (including posterior reversible encephalopathy syndrome, PRES), acute renal failure, and respiratory failure have been described as severe manifestations, and eight deaths have been reported. In addition to eating licorice candies, the given causes include the use of herbal medicine preparations, chewing tobacco, and drinking tea and alcoholic beverages. In the majority of cases, there was chronic consumption; individual cases of acute intoxication due to large amounts of licorice have also been described.

The active ingredient in licorice is glycyrrhizin, which is converted to 3β-monoglucuronyl-18β-glycyrrhetinic acid (3MGA) and 18β-glycyrrhetinic acid (GA) in the gut. These active metabolites inhibit the 11β-hydroxysteroid dehydrogenase type II enzyme (11β-HSD2) and prevent the conversion of cortisol to cortisone. Unlike cortisone, cortisol binds to the mineralocorticoid receptor. This cortisol excess leads to increased potassium and proton excretion as well as to sodium and water retention, with increased systemic resistance. The triad of symptoms typical of classic hyperaldosteronism (Conn’s syndrome) results from the aldosterone-like effect: hypokalemia, hypertension, and metabolic alkalosis (3).

In licorice toxicity, the aldosterone and renin levels are normal or suppressed, the cortisol-to-cortisone ratio in the peripheral venous blood is greatly increased. The diagnosis of these laboratory values also serves in particular to distinguish intoxication from possible differential diagnoses in the case of a licorice intake of questionable relevance; these include Conn’s syndrome, Cushing’s disease, and renal artery stenosis. Additionally, apparent mineralocorticoid excess (AME) syndrome presents similar laboratory values; however, it usually stems from a deletion in the HSD11B2 gene (16q22) and often manifests in childhood (4). Hypokalemia can lead to cardiac arrhythmia and rhabdomyolysis, which in turn can lead to tetraplegia and paralysis of the respiratory muscles. Myoglobinuria can trigger acute renal failure.

Potassium replacement and lowering high blood pressure are the relevant emergency measures. After samples for hormone diagnostics are taken, administration of mineralocorticoid receptor-blocking agents is particularly effective (e.g., spironolactone or eplerenone). In the majority of our cases, hypertension had previously been insufficiently controlled by medication. In all of our cases, all symptoms were reversible after cessation of licorice consumption, and the antihypertensive medication started previously could be reduced or discontinued. Nevertheless, fatal outcomes are also described in the literature. Toxic effects of licorice consumption occur in certain collectives (including in persons with pre-existing arterial hypertension, presumably due to reduced 11β-HSD2 activity) even at amounts perceived as being harmless. Loop and thiazide diuretics may potentiate the potassium lowering effects of licorice (of note, four of our patients had been previously medicated with thiazide). Patients with delayed gastrointestinal transit or with anorexia are also at greater risk because of the lower ingestion levels required for toxicity (5). In principle, the study situation on safe dose recommendations is insufficient, and non-daily consumption is also not shown in the available studies.

With this article, we would like draw attention to an underdiagnosed clinical entity that has significant implications for certain risk groups. Clear risk information and clearer labeling of the relevant products – including inclusion in the package inserts for medications – are desirable. Although the health risks associated with the consumption of licorice products have been known since the 1960s, the case reports published in Europe and internationally show that there is still a need for information. Licorice consumption may also play a role in some patients with regard to chronic hypertension, and physicians should therefore specifically ask about it. 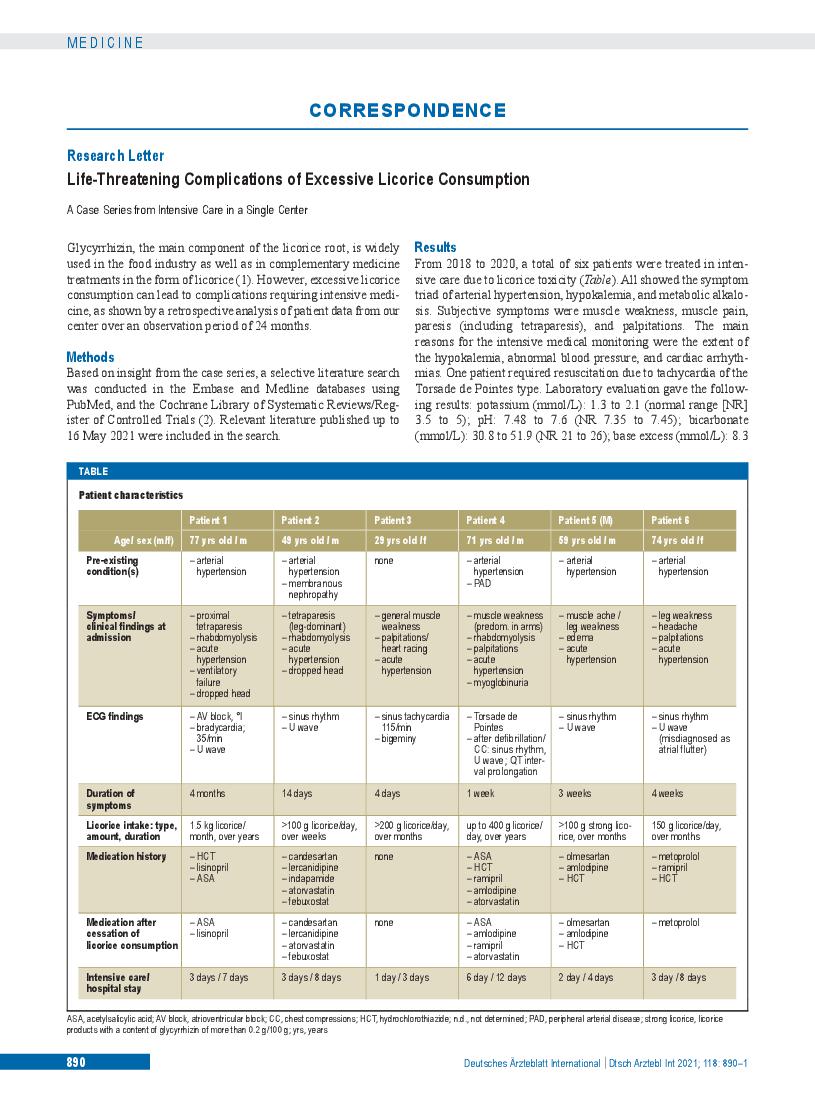