Guideline-Based Psychotherapy of Children and Adolescents in Germany

This work is based on nationwide, contract physician billing data from the associations of statutory health insurance physicians in Germany according to Section 295 SGB V. Data were made available by the German Central Institute for Statutory Health Insurance Physicians (Zi). With regard to the use of GPT, persons aged 0 to 19 years with statutory health insurance and with at least one billing case in 2019 were considered (N = 13.37 million persons). A detailed account of the methodology is given in Jaite et al. (4), which examined the use of psychotherapeutic services in the broadest sense.

To determine the number of therapy hours, GPTs were considered that ended in 2019, had started in 2010 or later, for a patient younger than 20 years at the start of therapy, and that took place in an individual setting without a change in procedure. A total of 68,351 patients were examined (male, 42.9%; female, 56.0%; other/unknown, 1.1%).

In 2019, 1.4% of all children/adolescents with statutory health insurance received GPT. Overall, only minor regional differences were found (new versus old federal states, 1.5% versus 1.4%; urban versus rural residential regions, 1.5% versus 1.3%). However, there were strong frequency differences between the individual districts (city of Suhl, 2.8%; district of Deggendorf, 0.6%). Among insured persons, the use of GPT was slightly higher for girls/female adolescents than for boys/male adolescents (1.6% versus 1.2%). The 15- to 19-year-olds received GPT the most frequently (2.5%), and 0- to 4-year-olds, the least frequently (0%). Children/adolescents with obsessive-compulsive disorders were most frequently treated with GPT (24.1% of all insured persons with this diagnosis), followed by children/adolescents with depressive disorders (18.2%) and adjustment disorders (14.2%) (Figure 1).

There were clear differences in the number of therapy hours depending on the respective psychotherapy method. By far the most therapy hours received were in the context of psychoanalytic GPT (mean value [mean]: 54.4 hours; standard deviation [SD]: 56.1), followed by depth psychology GPT (mean: 37.1; SD: 38.5) and behavioral therapy (mean, 27.1; SD: 22.7). Across all GPT procedures, the number of hours was highest in Berlin (mean: 40.1; SD: 39.0) and lowest in Mecklenburg-Western Pomerania (mean: 25.8; SD: 24.2) (Figure 2). Overall, only marginal gender differences in the number of therapy hours were observed. Irrespective of the therapy method, children aged 5 to 9 received the most therapy hours (mean: 36.6; SD: 36.2). With respect to diagnoses, children/adolescents with dissociative disorders (mean: 43.4; SD: 40.8), elimination disorders (mean: 41.4; SD: 41.0), and personality disorders (mean: 39.7; SD: 38.2) received the most therapy sessions.

Figure 2
Duration of treatment (number of hours, median) by district
Enlarge All figures

The main results of this work are:

The present study is based on secondary data, for which various limitations apply. The validity of the coded diagnoses cannot be checked; it is not possible to differentiate between main and secondary diagnoses; and information on possible pharmacotherapy is also missing. Conclusions on the appropriateness of psychotherapeutic care, especially in the case of adjustment disorders, are vague; this is also due to the fact that diagnoses of adjustment disorders are very heterogeneous in nature, and psychotherapeutic care is difficult to evaluate for such a collective category.

Figure 2
Duration of treatment (number of hours, median) by district
Enlarge All figures
Guideline-Based Psychotherapy of Children and Adolescents in... 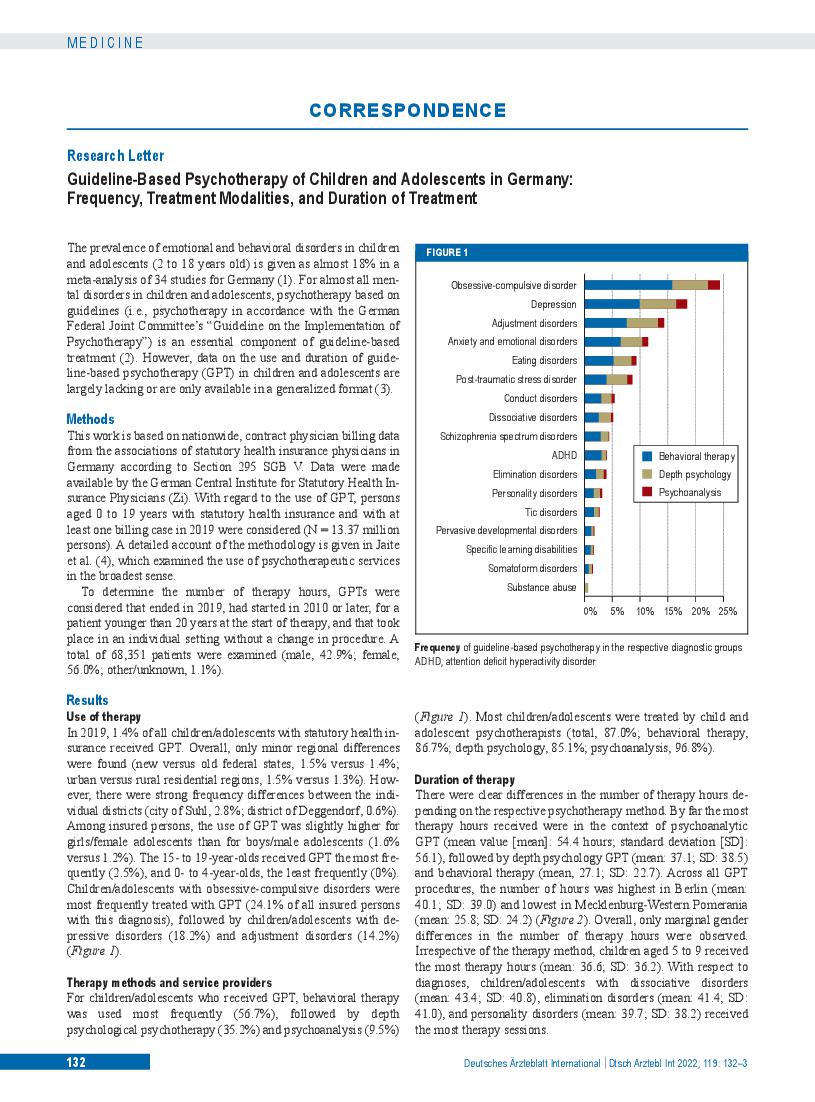