In the nearly 30 years since Louise Brown, the first child conceived by in vitro fertilization (IVF), was born in 1978, this method of assisted reproduction has rapidly become a routine procedure. IVF can be used to overcome female infertility due to occlusion of the oviducts.
When intracytoplasmic sperm injection (ICSI) was introduced in the early 1990's as a method of treating male infertility, many people were worried. The procedure significantly increased the success rate of assisted reproduction and enabled many parents to fulfill their wish of having children, but there was still concern about the health risks to children conceived by ICSI.

Imprinting defects – a cause for concern?
The injection of a spermatozoon into an oocyte is a rather crude technique. A non-physiological solution is injected into the egg along with the sperm cell. Its composition and pH may be such as to disturb the internal environment of the intracellular organelles and to adversely affect the process of parent-specific reprogramming of the paternal and maternal genetic material after fertilization (1). The German Joint Federal Committee (JFC, Gemeinsamer Bundesausschuss) is also concerned about the possibility that ICSI might elevate the risk of congenital malformations (birth defects). Therefore, when the method was incorporated into the catalog of procedures covered by statutory health insurance in Germany in 2002, the Joint Federal Committee stipulated that the safety of the procedure must be reviewed after three years of application.

Bertelsmann and her coauthors (2) have systematically reviewed the literature on the question of the risk of congenital malformations associated with the two major varieties of assisted reproduction, IVF and ICSI, and present their findings in the current issue of Deutsches Ärzteblatt. This is an important article. In our country, about 1 in 80 newborn infants is conceived by one of these two techniques. Since the introduction of ICSI by Palermo et al. (3), it has rapidly become a standard part of reproductive medicine for the treatment of both female and male infertility.

Why did concern arise about an elevated health risk after ICSI? The technique was introduced into clinical practice without any systematic accompanying prospective trials. Worries about potential risks increased when findings of imprinting defects in children conceived by ICSI became known (4, 5). It would be most unfortunate if assisted reproduction were indeed to confer a significantly elevated risk to the health of children conceived in this way.

Assisted reproduction, usually by ICSI, is also a prerequisite for preimplantation diagnosis (PID), a technique that is forbidden in Germany by the Embryo Protection Law (Embryonenschutzgesetz) but that is practiced in many other countries by high-risk parents to prevent the birth of children with serious genetic diseases. This fact is another reason why it is important to know what the health risks of conception by ICSI might be.

As Bertelsmann and her coauthors (2) emphasize, there is wide variation among the rates of congenital malformations after assisted reproduction that have been reported in the many publications on the subject. All in all, the published data give little reason to suspect that conception by ICSI is associated with significantly more malformations than conception by IVF. This is comforting; it seems that manipulation of the oocyte is not a risk factor for birth defects. Most of the published data, however, are concerned with live births. We cannot exclude spontaneous early selective death of damaged embryos or the induction of abortions because of fetal malformations.

Comparable risks with IVF and ICSI
It cannot be ruled out at present that both IVF and ICSI might elevate risk of malformations to a comparable extent, e.g., because of hormonal stimulation of the mother. In the largest prospective cohort study, the
study of Katalinic et al. (6) from Lübeck (Germany), the uncorrected rate for major congenital malformations after conception by ICSI was 8.7%, compared to 6.1% for IVF in a retrospective control group (difference, 2.66%). After adjustment for various confounding factors, the difference was reduced to 1.36%. As Bertelsmann and her coauthors point out, however, 5 of 8 studies revealed no significant differences at all.

Prospective studies are needed
Prospective evaluation of long-term health data in children conceived by assisted reproduction is difficult, particularly when possible confounding factors must be simultaneously taken into account. Nonetheless, one can only support the call by Bertelsmann and coauthors (2) for large, prospective cohort studies. Ideally, children conceived by ICSI or IVF should be observed till they reach adulthood. Even then, a possible elevation of the risk of metabolic disorders, tumors, etc., in later life because of imprinting defects could not be fully excluded. It is encouraging that a prospective study of 109 children conceived by ICSI revealed no differences in their psychomotor development and IQ scores at age 10 compared to normally conceived children of the same age (7).

The methods of reproductive medicine should not be oriented merely toward achieving the greatest number of births. The safety of the techniques and the possible risks to the children so conceived must be taken into account as well. If the risks to health seem to be only minimally elevated today, almost 30 years after the initial use of IVF and ICSI, then this is a very encouraging finding, yet it is no reason to be any less alert to potential problems in the future. 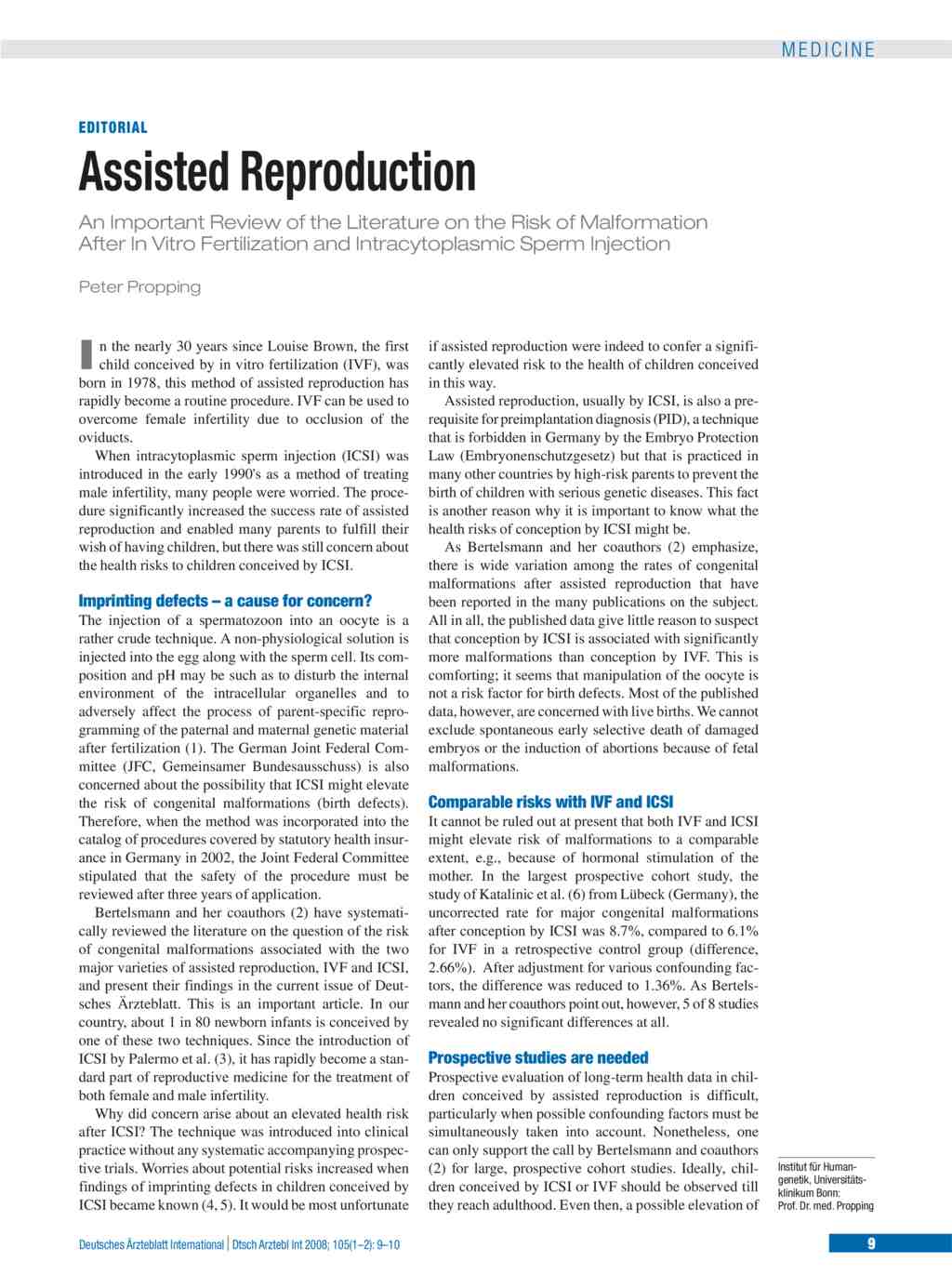