History and clinical findings: The authors report on a patient who presented to the medical emergency room with upper thoracic inlet syndrome following post-operative radio-chemotherapy treatment for left-sided breast cancer, six months previously. Based on the history and radiographic findings a complete port-induced thrombotic occlusion of the superior vena cava was diagnosed.
Methods: The authors present local standards for handling of port systems. Discussion: Port systems allow easy and safe venous access and facilitate the treatment of chronically ill patients. In the face of growing numbers of patients with implanted port systems, optimized handling and care of these systems, and awareness of risks (e.g. catheter occlusion, thrombosis, and infection), and recognition of complications is becoming increasingly important.
Dtsch Arztebl Int 2008; 105(1–2): 18–21
DOI: 10.3238/arztebl.2008.0018

A 41-year-old woman was sent to the emergency room because of swelling in the upper half of the body. For a few months, she had been suffering from an increasingly severe feeling of tension in the face, swelling and enlargement of the neck, and swelling of both arms and breasts. At the same time, there was livid discoloration of the skin on the trunk. She also experienced visual field defects while chewing, redness of the eyes, headache, vomiting, orthopnea, and a feeling of tightness in the chest. She had become dizzy and nearly fallen several times upon standing up. She had already been seen multiple times for these complaints in the local hospital closest to her home and had been evaluated by the gynecologist in charge of her oncological treatment.

In April 2005, carcinoma of the left breast had been diagnosed (stage pT2N1a [2/12] M0 G3 R0) and she had undergone a breast-preserving resection and lymphadenectomy. Adjuvant chemotherapy with six cycles of FEC (500 mg/m2 of 5-fluorouracil, 100 mg/m2 of epirubicin, and 500 mg/m2 of cyclophosphamide) and radiotherapy with an overall dose of 50.4 Gy were well tolerated. Adjuvant hormonal therapy consisted of goserelin and tamoxifen.

The patient's complaints had been attributed to the sequelae of radiotherapy. A central venous port system had previously been implanted in the right side of the chest. She did not smoke cigarettes.

Diagnostic assessment
The diagnostic assessment is described in detail in box 1 (gif ppt). The patient was found to be suffering from superior vena cava syndrome related to an indwelling port catheter, with a total, D-dimer-negative thrombotic occlusion of the superior cava and a floating thrombus in the right atrium. There was obstruction to venous flow into the chest from above, and there were signs of beginning venous collateralization.

Treatment and course
The patient stated that the port had not been removed after the completion of adjuvant chemotherapy, and she gave reliable information indicating that it had last been flushed about six months earlier. Because of the presence of a floating thrombus, the patient was treated with intravenous anticoagulation with unfractionated heparin. Another ultrasonographic examination 14 days later showed that the port tip thrombus had completely disappeared. The port was removed surgically under local anesthesia. Open embolectomy with vessel reconstruction was not possible. Because of the incipient collateralization and an unfavorable operating room situation, it was decided not to perform a bilateral saphenojugular bypass (1). After explantation of the port, the patient's anticoagulation was switched to phenprocoumone. The patient was discharged home in stable condition, but her symptoms failed to improve to any significant extent in her further course. Even after removal of the port, her symptoms persisted until her most recent follow-up in June 2007.

Proper handling of port systems
Permanent indwelling central venous catheters attached to an implanted reservoir, or "port systems," are now routinely used to facilitate the care of chronically ill patients, including patients with cancer. A port system consists of a chamber covered by a silicone membrane possessing a lateral opening to which a catheter tube is attached. It is usually implanted in the region of the right pectoralis major muscle. The catheter tube is tunneled subcutaneously and introduced by way of the subclavian vein to a position just above the right atrium. The port can be used directly after implantation. The patient is trained how to care for the port and is given a "port book" in which all manipulations of the port (puncture, needle removal, blood drawing, flushing, infusion, transfusion) must be documented. Despite a low overall risk (4), a few typical complications can arise that are often attributable to improper handling of the port (box 2 gif ppt).

Punctures of the port must be performed with strictly aseptic technique (5, 6). The person performing the puncture should wash the hands thoroughly, wear sterile gloves, and disinfect the puncture site thoroughly with antiseptic wipes (7, 8). The port is palpated and held in place so that the membrane can be found and punctured. The skin and the port membrane should be punctured at a different site from that used for the last puncture (9). The physician should note any tenderness, redness, swelling, or discharge at the implantation site. Infections of the port pocket are a relatively common complication (frequency up to 6.5%) (10, 11). Only special needles with a so-called Huber tip should be used to puncture port systems: conventional needles punch holes in the membrane, rendering the port unusable because the membrane is no longer reliably sealed once the needle is removed. A Huber needle can be used for a single blood draw, but needles that are to be left in place for longer times are preferably of the "gripper" type. Depending on the particular model, ports can be punctured from 1000 to 8000 times.

The intactness of the port must be checked before every injection or infusion. Any shortness of breath, chest pain, cardiac arrhythmia, erythema, swelling, tenderness, or pain in the area of the port should be diagnostically evaluated before the port is punctured. Once it has been punctured, blood is aspirated and the port is flushed with normal saline. A 20 mL syringe is used for flushing, because smaller syringes develop greater pressures, which may cause disconnection or tearing of the port catheter (9), potentially leading to extensive extravasation and severe tissue damage (5, 12). Signs of catheter dislocation or occlusion (frequency up to 25%) (6, 12, 13) include the inability to aspirate blood, resistance to flushing, injection-related pain, and burning or swelling at the injection site. If flushing is impossible, an x-ray of the port system should be taken. Blood-drawing through the port is, in general, permissible, but vacuum tubes should not be used, as they may cause collapse of the catheter lumen (9). The port system should be flushed after blood has been aspirated.

Port infections are often due to Gram-positive skin flora; this fact underscores the importance of aseptic handling of port systems (14, 15). The dressing over a port system should be changed every three days, but, if a transparent waterproof dressing is used, a 7-day interval is adequate.

Regular aspiration, flushing with normal saline, and sealing with heparin solution are the recommended method of port handling in order to keep complications to a minimum. Flushing in between the administration of two different medications can prevent the precipitation of reaction products of incompatible substances. Some authors recommend, as a measure to prevent port occlusion during therapy, that the port be flushed twice daily with a 10 IU/mL heparin solution (6). There has been no systematic study of the potential benefit of routinely changing the port needle (7). If the port is not needed for longer periods of time, it should be filled with heparin solution and either flushed once a month or surgically removed, in order to prevent the formation of thrombi and the adhesion of bacteria to the catheter wall (16, 17). The recommended heparin concentration is 150 to 300 IU in 3 mL normal saline for short-term sealing and 2500 IU in 3 mL normal saline for long-term sealing (18).

Treatment of port-related thrombosis
The goals of treatment are the prevention of venous thromboembolism and post-thrombotic syndrome (19). Available therapeutic options are conservative treament with therapeutic anticoagulation, fibrinolysis, and venous thrombectomy. After initial therapeutic heparinization (to a PTT 2–3 times above the normal value), the anticoagulation is switched to a coumarin preparation, which is continued for six months. Follow-up phlebography should be performed before the anticoagulation is discontinued. The recanalization rate after fibrinolysis roughly corresponds to that after operative thrombectomy (about 80% for fresh thromboses). Operative thrombectomy is indicated if lysis is contraindicated or in cases of phlegmasia cerulea dolens (massive, acute venous occlusion). The contraindications to operative thrombectomy include a poor performance status, thromboses caused by a compressing tumor or by permanent indwelling intravenous devices such as port catheters or cardiac pacemakers, and older thromboses (> 14 days).

In summary, permanent indwelling central venous catheters with reservoirs, or port systems, provide a safe and inexpensive means of venous access that also minimizes patient discomfort. Proper handling is of crucial importance so that complications such as port thromboses and infections can be avoided. As can be vividly seen in the case presented here, lack of knowledge about proper port care had serious consequences for the patient's health and caused further, major complications later on. The clinical manifestations of port thrombosis were misdiagnosed as radiation-induced pathological changes. 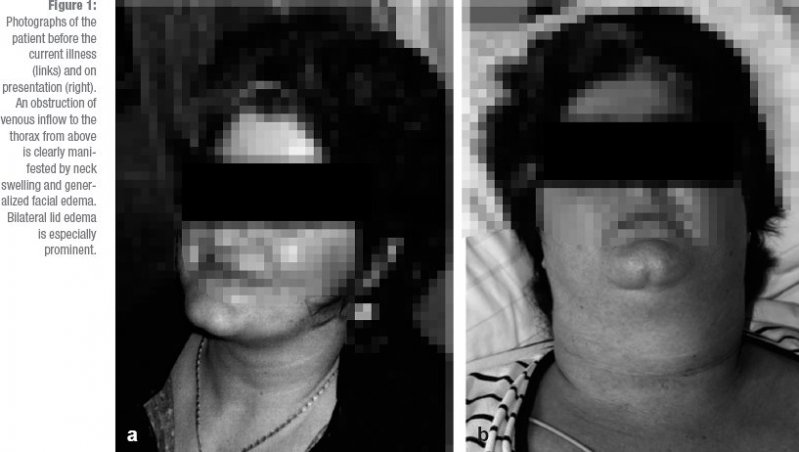 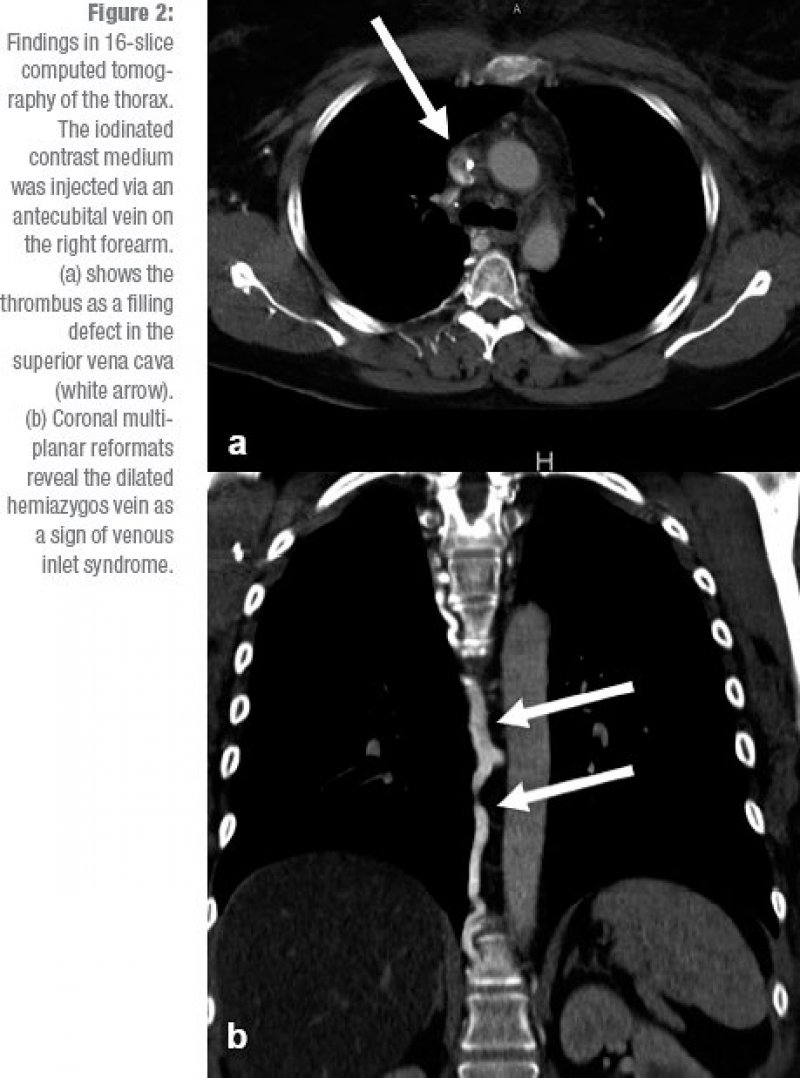 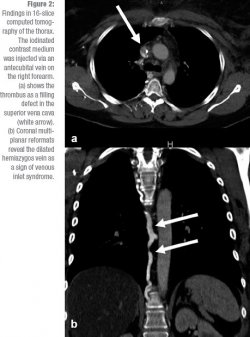 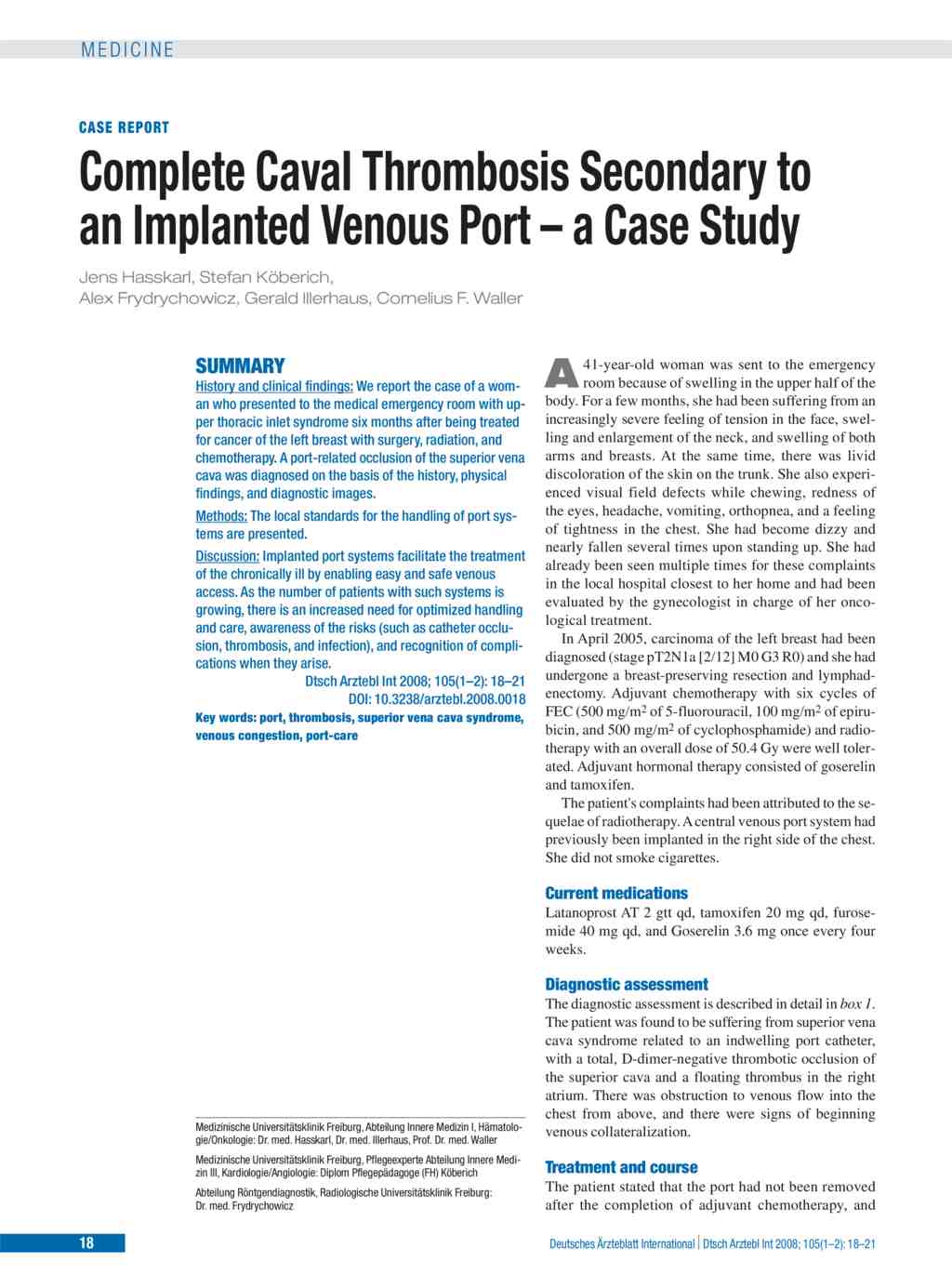