Cardiovascular Risk Factors and Signs of Subclinical Atherosclerosis in the Heinz Nixdorf Recall Study: In Reply

We thank Dr. Zimmermann for pointing out that the sleep apnea syndrome is a cardiovascular risk factor.

The goal of the Heinz Nixdorf Recall Study is to determine the predictive value of coronary calcification (an indicator of subclinical atherosclerosis) for cardiovascular morbidity and mortality. Other indicators of subclinical atherosclerosis, such as intimal-medial thickness and plaque formation in the carotid artery and the ABI index for peripheral arterial occlusive disease, were looked at as well. In addition to the ECG and the stress ECG, anthropometric and psychosocial factors were analyzed.

Obstructive sleep apnea (OSA) elevates cardiovascular risk independently of other, often associated risk factors such as advanced age, obesity, and metabolic disorders (1–3). Large-scale epidemiological studies have shown that OSA is of particular importance as an independent risk factor for arterial hypertension (2, 3). Thus, according to published guidelines, a work-up of arterial hypertension should include screening for sleep apnea.

In the second phase of the Heinz Nixdorf Recall Study, which is currently in progress in cooperation with Prof. Teschler of the Ruhrlandklinik in Essen (Germany), due attention was paid to these facts and nocturnal respiratory monitoring was performed.

Because logistical difficulties prevented the performance of complete polysomnography – the gold-standard test for OSA – in all of the study subjects, a simple screening test of breathing during sleep was carried out (Apnea Link, Resmed, Sydney, Australia). Dr. Wessendorf and colleagues recently presented the initial findings: in the patient collective of the Heinz Nixdorf Recall Study, OSA was a frequent comorbidity, and its severity was correlated with the age, body-mass index, and waist-hip ratio of the patient. These results are in accordance with those in the published literature on the subject. An initial analysis has also shown an association with coronary calcification; we are currently studying the question whether this is true independently of other risk factors.
DOI: 10.3238/arztebl.2008.0294b 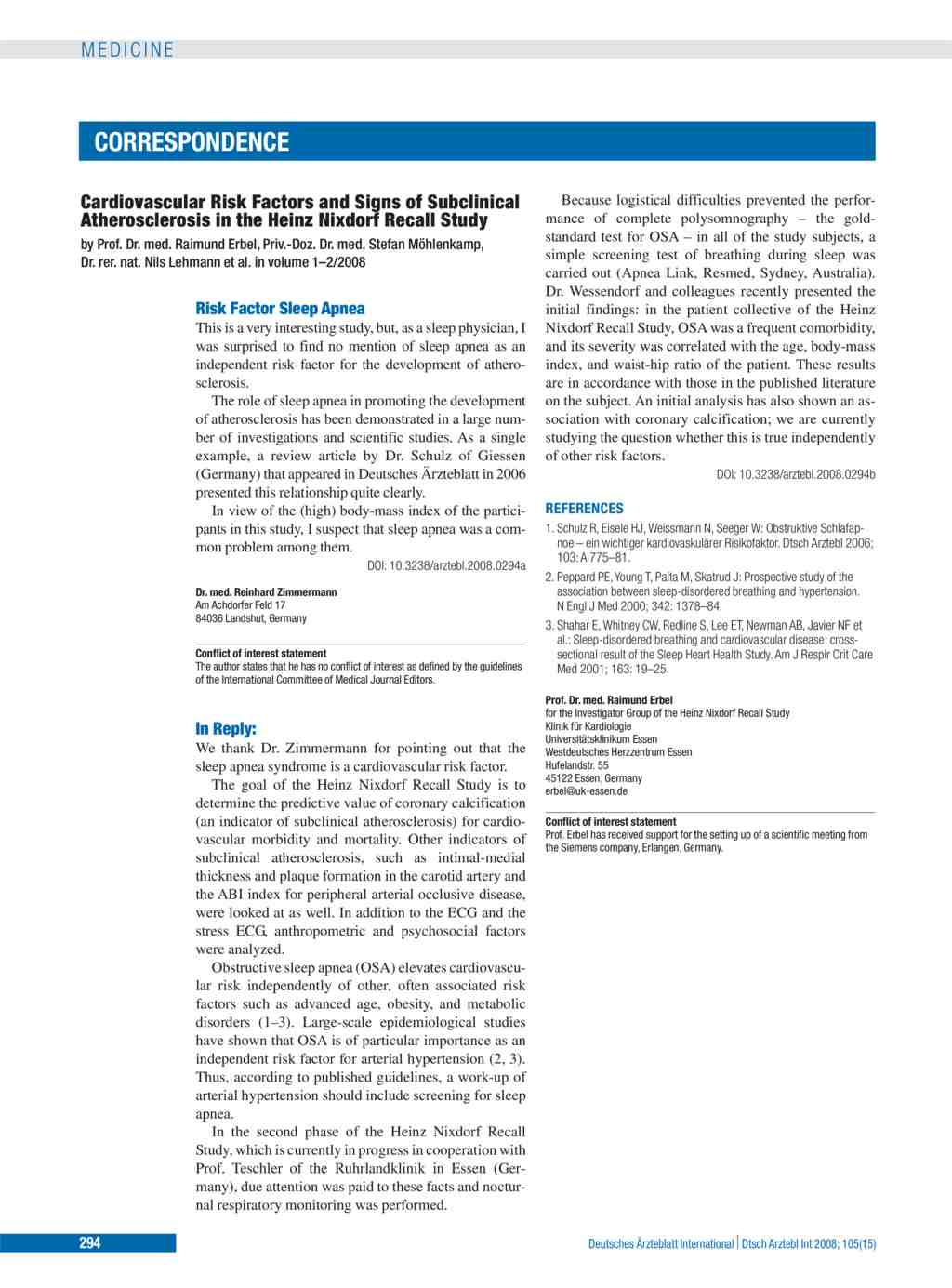