The Will to Live Instead of Euthanasia

Neurodegenerative Diseases As Seen by the Sufferers Themselves

Accompanying the article „Depression and Quality of Life in Patients With Amyotrophic Lateral Sclerosis“ by Lulé et al. in this issue of Deutsches Ärzteblatt International

In the study whose results they present on the following pages, Lulé, Häcker, and colleagues have shown that the subjectively experienced quality of life of patients with amyotrophic lateral sclerosis (or Lou Gehrig's disease) lies in the same range as that of healthy people. Thus, even persons with a dramatically progressive neurodegenerative disease can have a positive attitude to life and can be free of depression in any phase of their illness. This finding is of fundamental importance for other neurodegenerative diseases, and indeed for fatally progressive illnesses of many other types, which can make the patient's life seem not worth living in the eyes of outside observers.

The findings of Lulé et al. are consistent with those of Averill et al. (1), who, in nearly 30 investigations of patients with amyotrophic lateral sclerosis, found depressive disturbances to be far less common and less severe than might have been expected. Albert et al. (2) questioned patients in the terminal stage of amyotrophic lateral sclerosis at monthly intervals; only 20% of them expressed a desire to die. Such a desire was more likely among depressed patients, but also among those who found less consolation in religious faith and those who did not want to experience a loss of autonomy and control.

In brain diseases such as amyotrophic lateral sclerosis, Alzheimer's disease, and other types of dementia, progressive frontal lobe dysfunction often leads to a loss of insight and to emotional indifference. One might argue against the results reported here by saying that a patient with a serious and incurable disease of this type actually ought to be depressed, and, if not, this merely reflects the patient's inability to assess his or her own condition accurately. Such an objection could only be raised by persons who are too insensitive to be ashamed of it.

Yet the presumptuousness of the well seems to be the order of the day when it comes to assessing the humbling effects of illness on others. The loss of human dignity that results has been designated with a telling word in the current debate over euthanasia for demented patients in the Netherlands: the Dutch speak of „ontluistering,“ literally "extinguishment" (removal of the light) (3). The euthanasia debate within the medical profession, and among the public at large, was extended long ago to patients who have not yet reached the most advanced stages of illness. Despite the inherent diagnostic and prognostic uncertainties, the issue of euthanasia is now raised even in the earliest stages, even though there seems to be no demand for it at all among the mildly or questionably affected patients in this group (4).

In a sampling of the British (healthy!) population, 60% of persons surveyed said they would not object to assisted suicide in case they developed severe dementia, and 75% said they would want life-prolonging measures to be withheld; this rigid position was particularly widespread among white persons (5). The findings were even more dramatic when the individuals questioned were physicians themselves: only 20% said they would want to be resuscitated if they suffered from chronic organ failure, and the figure dropped all the way to 2% in case of Alzheimer's disease (6).

The attitudes and desires of nursing-home inhabitants about life-prolonging and life-shortening treatment remain stable over a period of years (7), and their relatives, when required to make a decision, tend to opt in favor of life-shortening measures (8). In such cases, the high demands that the free and civilized individuals of the 21st century tend to place on themselves, combined with their anticipatory self-contempt in case of serious illness, seem to point in the same direction as the economic interests of society as a whole. Already 20 years ago, David Callahan argued for rationing in the health-care system by using neurodegenerative illnesses as the prime example of an area where this could be applied (9).

The article by Lulé et al. now provides us with a suitable occasion to rethink our prejudices about the value and dignity of human life. Pain, depression, and other factors that can impair patients' well-being must be detected and treated. Once this is done, patients with serious neurological disorders, even including locked-in syndrome (10), can nonetheless continue to enjoy an acceptable quality of life and want to go on living. Thus, life-shortening measures for patients with certain diseases should no longer be rationalized as a "release from suffering." This putative suffering is in the eye of the observer, rather than in the subjective experience of the patient. This presumed suffering reflects the observer's view from the outside, rather than the subjective perspective of the patient. Tragically, some patients may have made fatal decisions for themselves in the past, before they became ill, from the point of view of their former selves as healthy and naive people. 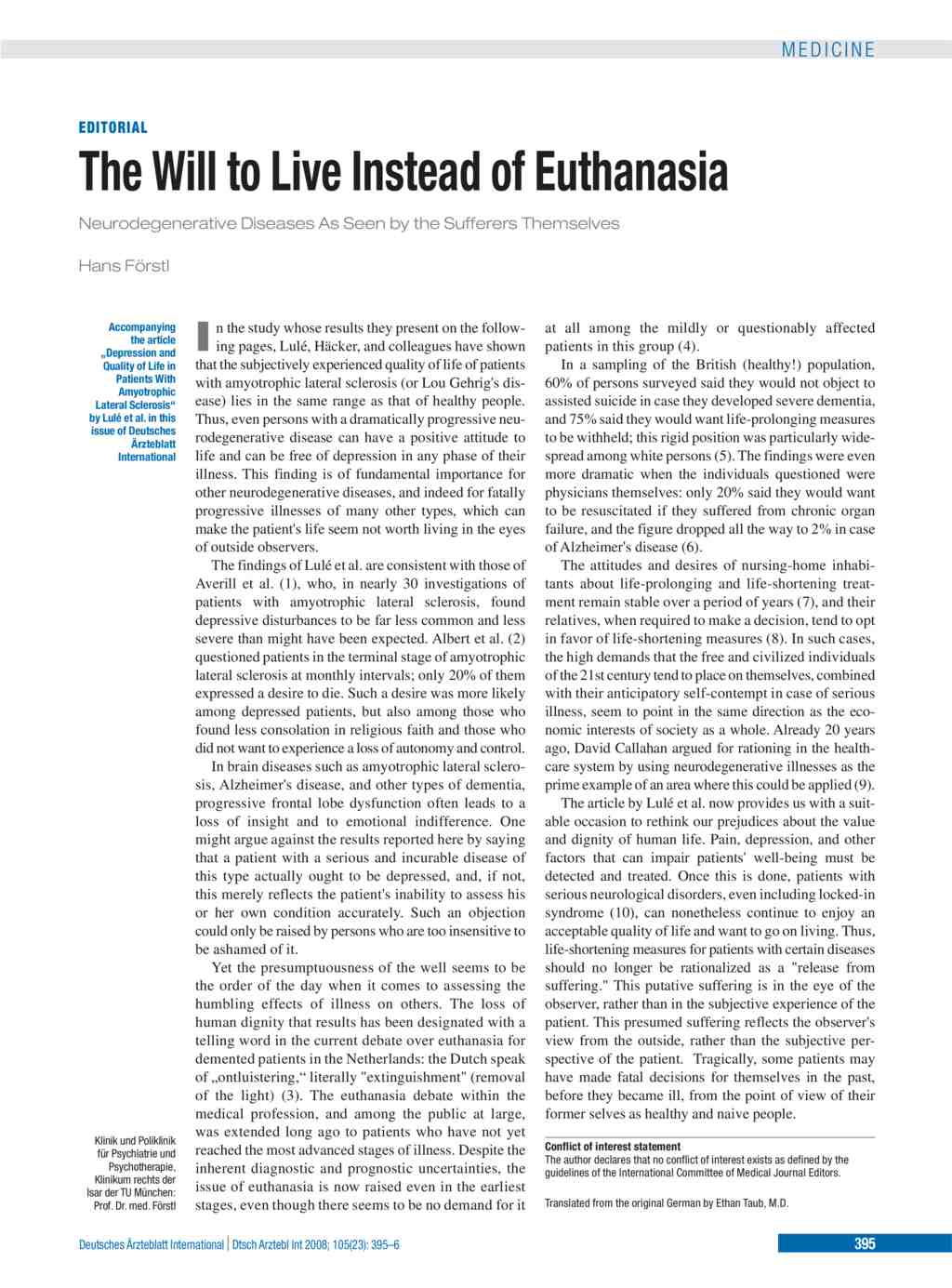