DÄ internationalArchive43/2008Diagnosis and Treatment of Vertigo and Dizziness: In Reply

Diagnosis and Treatment of Vertigo and Dizziness: In Reply

We would like to thank all our colleagues for their questions and constructive criticism. Phobic postural vertigo is a well-defined disease entity for which there are internationally accepted diagnostic criteria. We agree that phobic postural vertigo often has a psychiatric comorbidity, especially depression.

In our therapeutic trial, patients were observed for one year. We have now obtained up to three years of follow-up on these patients, and our long-term observations support the positive results obtained earlier with high-dose betahistine treatment. The findings of the pilot study provide the foundation for a randomized, placebo-controlled dose-finding study that is currently being supported by the German Federal Ministry of Education and Research. In routine clinical practice, there is no difficulty drawing a distinction, on clinical grounds alone, between psychogenic vertigo and dizziness and Menière's disease. On the other hand, the differentiation of Menière's disease from vestibular migraine is often difficult, especially as 60% of patients may fulfill the diagnostic criteria for both of these entities. As far as the mechanism of action of betahistine is concerned, we would like to emphasize that this agent is an H1 agonist and H3 antagonist that has been found to improve the perfusion of the inner ear in animal experiments (1); it may thus improve the balance between endolymph production and resorption, and thereby alleviate endolymphatic hydrops.

As for the Epley and Semont maneuvers for the treatment of benign positioning vertigo, a number of meta-analyses have shown that these two techniques are equally effective (for a review, see [2]).

Finally, as for the differential diagnosis of vestibular neuritis and pseudoneuritis, vestibular neuritis is a diagnosis of exclusion. If the patient has central oculomotor disturbances such as saccadic pursuit or gaze-evoked nystagmus, if the Halmagyi head-thrust test is normal, and if nystagmus cannot be effectively suppressed by visual fixation, then pseudoneuritis is the likely diagnosis (3). The underlying cause is an ischemic or inflammatory lesion at the entry zone of the eighth cranial nerve, or else a unilateral cerebellar infarction. Patients with such findings or multiple vascular risk factors should undergo MRI scanning of the head. The most important purpose of MRI scanning in this situation is to rule out ischemia. DOI: 10.3238/arztebl.2008.748 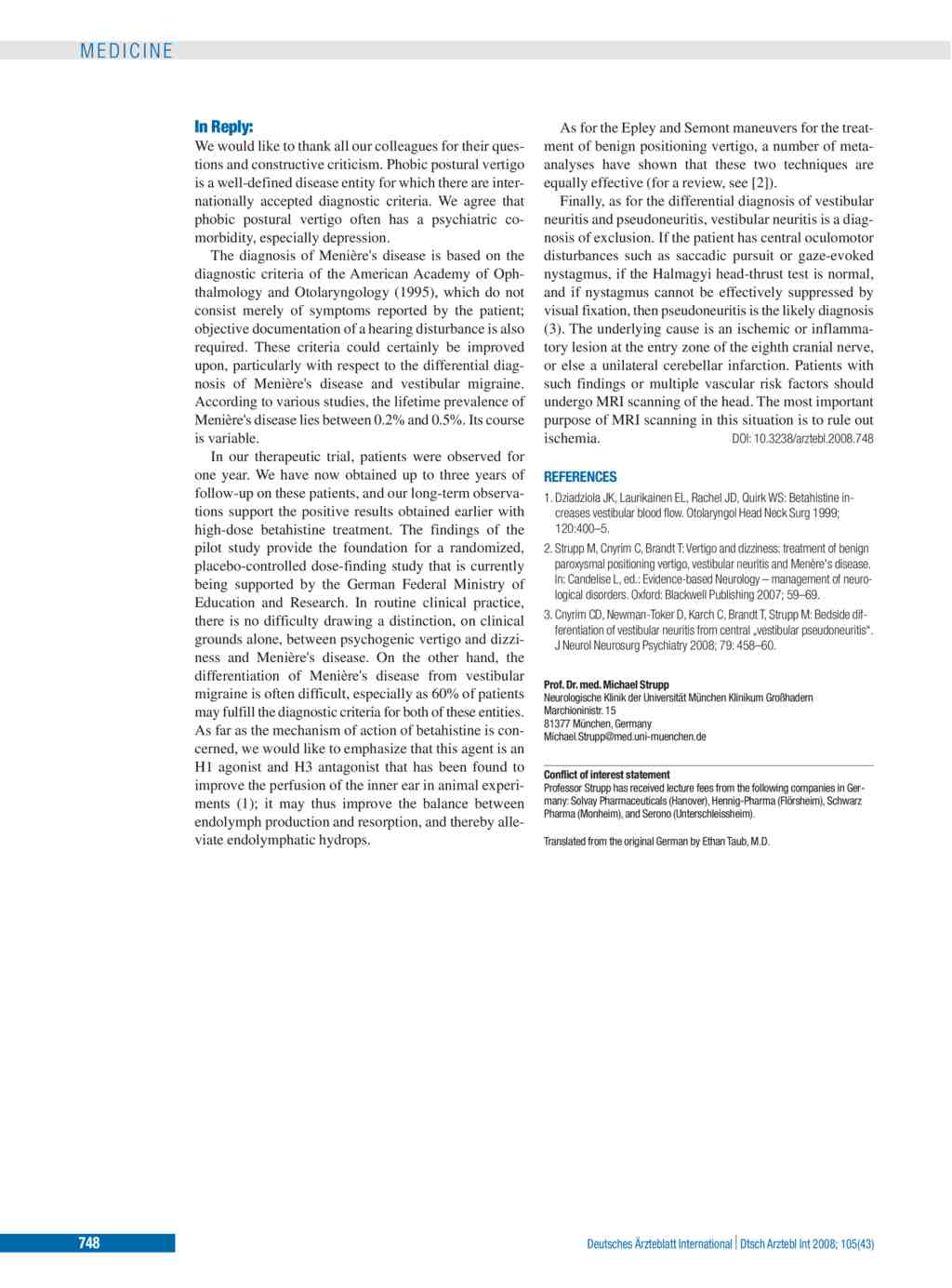