Background: The epidermal growth factor receptor (EGFR) is an important target in the treatment of metastatic colorectal carcinoma (mCRC). The combination of anti-EGFR antibodies with chemotherapy has led to a higher response rate of certain kinds of tumor as well as a significant prolongation of the progression-free interval. The KRAS protein is an important mediator in the signal transduction cascade regulated by the EGFR. A KRAS mutation is present in 30 % to 49 % of all colorectal carcinomas. Mutations in the KRAS gene can be demonstrated by the methods of molecular pathology and are a very important factor in the selection of molecular biological treatment options targeted against EGFR.
Methods: Selective literature review.
Results: Patients bearing mutations of the KRAS gene do not benefit from treatment with the EGFR antibodies cetuximab and panitumumab.
Conclusions: Activating mutations of the KRAS gene are biomarkers for resistance to cetuximab or panitumumab. Thus, anti-EGFR therapies are approved for the treatment of metastatic colorectal carcinoma only on condition that the mutation state of the KRAS gene is determined first, because the combination of chemotherapy with anti-EGFR is expected to increase the response rate only in patients with the wild-type KRAS gene.
Dtsch Arztebl Int 2009; 106(12): 202–6
DOI: 10.3238/arztebl.2009.0202
Key words: colorectal carcinoma, cetuximab, molecular medicine, gene mutation, cancer therapy

As a consequence of the development of monoclonal antibodies to the epidermal growth factor receptor (EGFR) or the vascular endothelial growth factor (VGFR), specific molecular biological therapies of metastatic colorectal carcinoma have greatly increased in significance. Thus, numerous studies have demonstrated the clinical efficacy of cetuximab and panitumumab, both specific antibodies against EGFR. It was first shown in the BOND study that if irinotecan-pretreated patients with metastatic colorectal carcinoma are treated with a combination of cetuximab and irinotecan, this significantly increases the response rate and progression-free survival, without a significant increase in the survival time (1). The progression-free survival (PFS) is the survival time in which the tumor does not progress.

Several studies—mostly performed with pretreated patients—have shown that mutations in the KRAS gene are linked to tumor resistance to EGFR inhibitors, as KRAS mutations lead to intrinsic activation of the EGFR-dependent signal transduction cascade. This activation is independent of EGFR-expression and cannot be inhibited by drugs which act on EGFR itself.

We will now review the effect of KRAS (Kirsten-RAS) status on the clinical activity of specific tumor therapy against EGFR.

EGFR expression can be detected in about 70% of patients with metastatic colorectal carcinoma and is linked to poorer prognosis (2, 3). The degree of EGFR expression - detected by immunohistochemistry - is not correlated with the efficacy of anti-EGFR therapy (1, 4). It is therefore unnecessary to detect EGFR by immunohistochemistry before starting anti-EGFR therapy.

On the basis of these functions of the EGFR, several therapeutic targets have been defined and specific drugs developed to influence these. Two monoclonal antibodies against EGFR have been approved in Germany. Cetuximab is a monoclonal chimeric mouse/human antibody against the extracellular domain of the EGFR and inhibits ligand binding. In vitro cell culture studies have shown that this then inhibits the receptor tyrosine kinase and the signal transduction dependent on this, leading to inhibition of proliferation and migration and enhancement of the apoptosis of tumor cells (5). As cetuximab is an IgG1 antibody, it can induce antibody-dependent cell mediated cytotoxicity. However, this effect seems to be of secondary therapeutic importance. The most important adverse effect of cetuximab is acneform exanthema. This occurs in about 70% of treated patients and correlates with the efficacy of anti-EGFR therapy. This can mostly be well treated with topical agents, for example, with creams containing cortisone or antibiotics. If the exanthema is severe, oral systemic antibiotic therapy with a tetracycline, such as monocycline, may be useful. Rarer adverse effects occur in about 1% to 10% of patients, including allergic infusion reactions, fatigue, nausea, fever, diarrhea, and mucositis.

Panitumumab is the second anti-EGFR antibody approved in Germany. In contrast to cetuximab, it is a pure human IgG2 antibody, without antibody-dependent cytotoxicity. The first infusion of this drug only triggers an acute allergic reaction in about 1% of patients. Isolated fatalities from anaphylactic reactions have only been described after infusion of cetuximab.

Aside from the blockade of the extracellular EGFR domain, tyrosine kinase activity can be inhibited with tyrosine kinase inhibitors such as erlotinib. However, only early phase studies have been performed on the use of erlotinib in metastatic colorectal cancer. Erlotinib is currently solely approved for the treatment of metastatic pancreatic carcinoma and non–small cell bronchial carcinoma.

RAS proto-oncogenes and the KRAS mutation
The ras (rat sarcoma) proto-oncogene family consists of small GTP-binding proteins (G-proteins) with a molecular weight of 21 kDa. Three different RAS proteins (HRAS [Harvey RAS], KRAS [Kirsten-RAS], and NRAS [neuroblastoma RAS]) are currently known; their expression is tissue specific (6, 7). The KRAS protein is important for EGFR function. It is localized to the internal plasma membrane and possesses GTPase activity (8). Activation of the KRAS protein is downstream from phosphorylation of the EGFR tyrosine kinase. Further signal transduction is linked to RAF (root abundant factor), MEK (MAP kinase/ERK kinase) and ERK (extracellular regulated MAP-kinase), ultimately leading to transcription of genes in the cell nuclei which lead to malignant progression of the tumor.

The KRAS mutation is generally detected using molecular pathological tests on preserved and archived tissue material. As the various studies used primary tumors and tested for codons 12 and 13, the same procedure is used for routine molecular pathology testing. One reason is that in more than 98.4% of cases, the mutations are in codons 12 and 13. A second reason is that there is high concordance between the mutations in colorectal carcinomas and in the corresponding primary tumors. The KRAS mutation is detected with various PCR-based methods, such as didesoxy sequencing, pyrosequencing, ARMS (amplification refractory mutation system)-PCR, mutation specific hybridization, melting point analysis, and others. We have not been able to find any advantage for any one procedure over the others, so that each laboratory should test and validate the quality of the molecular pathological tests it uses to detect KRAS mutations. For this purpose, the German Society for Pathology, together with the Association of German Pathologists, offers an interlaboratory comparison as part of their quality assurance campaign QuIP (Initiative for Quality Assurance in Pathology). Two QuIP interlaboratory comparisons have now been performed, on the basis of which 49 departments of pathology in Germany have been awarded certificates for the successful and reliable performance of the molecular pathological KRAS mutation test (for detailed information please refer to the following German-language website: www99.mh-hannover.de/institute/pathologie/dgp).

Prognostic relevance of the KRAS mutation
Reports on the effect of KRAS mutations on the prognosis of colorectal carcinoma are inconsistent. Some studies suggest that KRAS mutations indicate a negative prognosis for overall survival (15). Thus, a multivariate analysis of more than 2400 patients—with covariates of patient age, Duke's stage and codon 12-KRAS mutations—demonstrated significantly poorer prognosis in patients with KRAS mutations. A significant reduction in the disease-free interval and in the overall survival was only found in Duke's C and Duke's D tumors, but not in Duke's B tumors (16). Thus the probability of dying within a median observation time of 4.7 years after surgery was 2.8-fold greater with Duke's stage C and 11.2-fold greater with Duke's stage D if a KRAS mutation had been detected than if only the wild type was present. However, other studies have failed to show this effect (17).

Influence of the KRAS mutation on therapy
Studies performed on pretreated patients with metastatic colorectal carcinoma indicate that treatment with cetuximab or panitumumab is ineffective in the presence of a KRAS mutation (table 1 gif ppt) (13, 18–23). At the last annual meeting of the American Society for Clinical Oncology (ASCO), several randomized studies were presented which investigated the activity of cetuximab-based combination therapy as first line treatment, in dependence on the KRAS status. The CRYSTAL study compared chemotherapy with 5-fluorouracil and irinotecan (FOLFIRI), plus cetuximab, with chemotherapy alone. A KRAS analysis could be performed in 540 of 1198 patients and 36% of the patients investigated were found to have a KRAS mutation. In patients with wild type KRAS, addition of cetuximab to FOLFIRI caused a significant increase in the remission rate (59% versus 43%) and in progression-free survival (PFS) (9.9 versus 8.7 months). On the other hand, no activity was found in patients with a KRAS mutation (table 2 gif ppt). Comparable results were found in the OPUS study, which compared oxaliplatin-based chemotherapy (FOLFOX) plus cetuximab with FOLFOX treatment alone. This study too showed that the combination of cetuximab with first line chemotherapy only contributed to increased efficacy in patients with KRAS wild type. In contrast, when cetuximab was included in the treatment of patients with KRAS mutated tumors, the remission rate was clearly less (33% versus 49%) and the PFS was significantly less (5.5 versus 8.6 months; p = 0.0192) than with chemotherapy alone (table 2). A current retrospective study (24) showed that mutations in B-RAF (v-raf, murine sarcoma viral oncogene homolog B1)—a downstream protein from KRAS (figure)—can also restrict EGFR-targeted antibody therapy. It is not yet clear whether this finding is clinically relevant.

In contrast to cetuximab and panitumumab, treatment with bevacizumab does not target EGFR, but VEGF, so that bevacizumab is also active in patients with mutated KRAS. It is therefore unnecessary to determine the KRAS mutation status for therapy which is primarily anti-angiogenic (25).

Conclusion
Therapeutic decisions in the treatment of metastatic colorectal carcinoma have been dependent on the stage of the disease, the kinetics of progression or the symptoms. Current therapeutic studies have led to a new level of decision making, based on the molecular biological characteristics of the tumor. As anti-EGFR treatment can only be expected to be active with tumors with the KRAS wild type, it is absolutely essential to perform a primary analysis of the KRAS mutation status before making a proper therapeutic decision. If cetuximab or panitumumab is used in patients with the KRAS mutation, there is a risk of adverse effects and unnecessary costs, without any prospect of effective treatment.

The relevance of the study data is impaired by the fact that the KRAS analyses have only been performed in retrospective studies and are therefore only available for subpopulations. However, the high consistency of the data is convincing.

Other parameters of tumor biology have not yet been able to offer the same degree of predictive value for the efficacy of anti-EGFR therapy as is possible with the KRAS mutation status. Nevertheless, the skin reaction under anti-EGFR therapy is still an important predictive and prognostic factor. Thus, it can be assumed that KRAS wild type patients who develop acneform exanthema during treatment will benefit most from anti-EGFR therapy.

Determining the KRAS mutation status is technically demanding and this has led to the establishment of a quality assurance system organized by the participating departments of pathology. The costs of the tests are more than made good by the specific avoidance of inactive treatment and the resulting side effects.

Conflict of interest statement
Professor Heinemann has received financial support for clinical studies from Merck, Roche, Grenzach, and fees for scientific lectures from Merck, Roche, and AMGEN.
Dr. Moosmann has received lecture fees from Merck.
Professor Kirchner states that he has financial links to AMGEN, Merck-Sorono, and Roche Diagnostics.
PD Dr. Jung states that he has financial links to AMGEN and Merck-Sorono.
Professor Hiddemann and Dr. Stintzing declare that there is no conflict of interest in the sense of the International Committee of Medical Journal Editors.

Table 2
Enlarge All figures
The Treatment of Colorectal Carcinoma With Monoclonal... 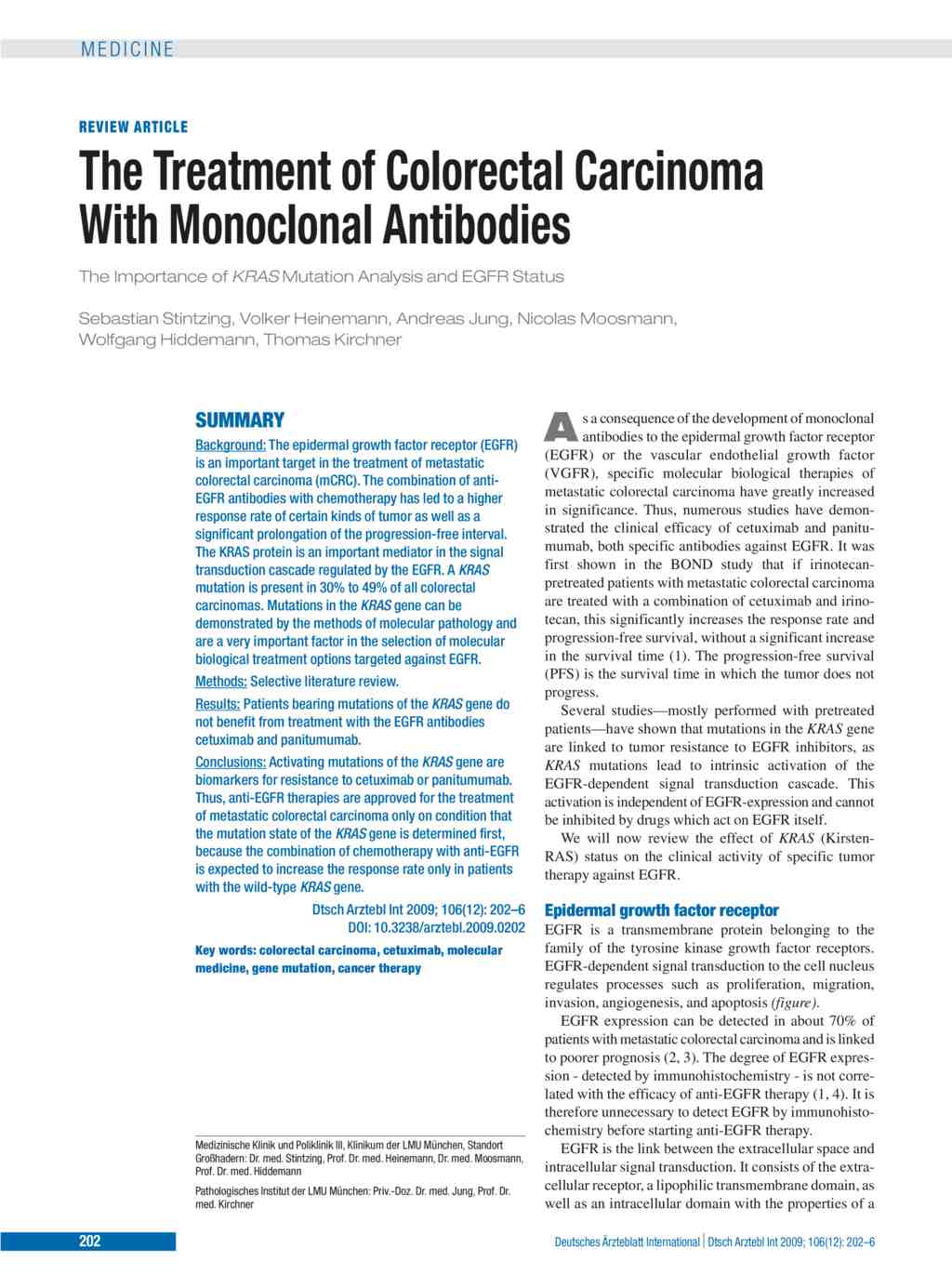